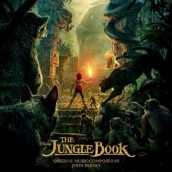 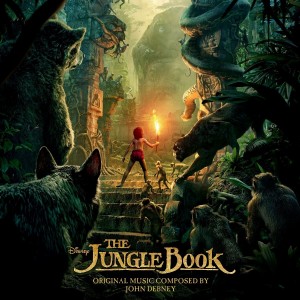 With his father Louis Debney playing his part in the birth of Disney animation, it was only natural that his musically talented son John would get his start at the studio on his way to turning its beloved 1967 toon into an astonishing example of live action flesh and CGI fur. You can certainly hear the love tonight in Debney’s epic valentine to his alma mater, as well as the inimitable tunes of its greatest songsmiths The Sherman Brothers by reading THE JUNGLE BOOK as it scales new heights for the composer.

Debney has done an impressive job segueing from Mickey Mouse to the musical animal kingdom, of wolves (WHITE FANG 2), huskies (SNOW DOGS), cheetahs (DUMA) and one goofy ursine (YOGI BEAR) – most species of which join for one giant jam session with an endangered, if crafty man-cub named Mowgli. But if there’s one trick that makes this grandly ambitious JUNGLE BOOK work is that his frequent filmmaking collaborator Jon Favreau (ZATHURA, IRON MAN 2) isn’t out to play stupid pet tricks. Instead, his wildly successful toon-to-movie adaptation is done seriously, the humor and affection stemming from the characters with honesty instead of wink-wink hipness. While it’s not as if Debney hasn’t done no small amount of Mickey-Mouse’ing for the younger set in this genre, THE JUNGLE BOOK gives him his biggest opportunity to go for emotional character in a kid’s movie, and he runs wild with it. Vaguely set in the Indian jungle (though it could just as well be Africa), Debney goes with all-purpose exotica from ethnic drumming to Asian winds and percussion, all given a strong, orchestral grounding of strings and brass that’s always made Debney an unabashedly melodic composer. Not only is John Williams his spirit animal, but also John Barry is heard as well in passages that convey an OUT OF AFRICA-esque grandeur to his rousing, western-style jungle of string, brass and chorus. It’s a place of magical enchantment, but one resounding with the danger of the plenty of not-so-friendly critters who seek to make a meal out of Mowgli. There’s terrific, fun danger to THE JUNGLE BOOK that brings out the roaring fangs of the far more adult, primal scores that Debney has done for the lethal menagerie of THE RELIC, KOMODO and PREDATORS, combining to make Shere Khan, a tiger who’d musically eat Mustafa for breakfast. His threat builds to some of the most flamingly exciting music that Debney has yet written, conveying true, serious drum-beating danger and choral, character-making heroism for the ultimate mano-a-mean kitty that makes no bones out of scaring the little ones. But then, it’s the humanity, jeopardy and warmth that Debney puts body and soul into one of his best scores that makes THE JUNGLE BOOK sing.

While this movie will likely top the cartoon for the new Disney generation, there’s no doubt that The Sherman Brothers’ tunes will remain eternal. And there’s certainly no bigger fan than Debney. A big joy of this JUNGLE BOOK is hearing how such classic tunes as “The Bare Necessities” and “Trust in Me” have been incorporated into the score, the themes effortlessly merging with Debney’s own to become hypnotically slithering storytelling, or a honey-sweet moment of floating bliss. The songs first given life by Sterling Holloway, Sebastian Cabot and Louis Prima are given pleasant new shadings here, with Scarlet Johansen’s husky voice making for a particularly seductive Kaa, Bill Murray giving a carefree New Orleans bounce to Baloo’s philosophy of the good life, and the Christopher Walken putting real streetwise menace into King Louie’s desire to be human (you’ll find more cowbell for him in a particularly ingenious sight gag).

Click on the link to buy THE JUNGLE BOOK soundtrack