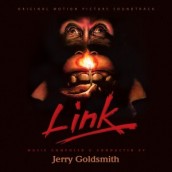 here Jerry Goldsmith was lionized for any number of inventive, mainstream scores like BASIC INSTINCT, TOTAL RECALL and THE WIND AND THE LION, the composer had an equal knack for embodying idiosyncratic characters for movies well below the widely accepted radar like UNDER FIRE, THE SALAMANDER and THE TRAVELING EXECUTIONER. Goldsmith’s creativity flowed with noticeable enthusiasm for these soundtracks where he could show off his devilishly clever humor and emotional resonance, whether accompanying an orangutan manservant or a mystical albino.

In his follow up to PSCYHO II for director Richard Franklin, Jerry Goldsmith was given the opportunity to play a not-so obviously lethal killer. Instead, LINK was cute, orange-furred character that makes a terrifying transformation, but without benefit of turnin 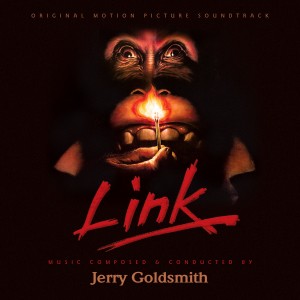 g into a reptilian creature in the bargain. Yet in terms of shear, simian-embodying humor, LINK just might stand tall as the composer’s best comedy-horror score next to GREMLINS. Likely realizing the goofiness of a homicidal orangutan dressed in a butler’s suit to service Terence Stamp (or put the goo-goo eyes on assistant Elizabeth Shue), Goldsmith instead gave LINK his version of a monkey grinder theme, as opposed to the avant-garde jungle wind and percussion approach of PLANET OF THE APES. And where Gizmo and company might have had cat-like musical mewls, Goldsmith’s monkeyshines provide wacky ape vocalizations. With the orchestra likewise turned into the kind of three-ring circus that was LINK‘s previous home, Goldsmith breaks out the trusty fiddle, an instrument that’s provided him no end of sinister delight, whether it be signaling alien invaders from THE TWILIGHT ZONE or the satanic antics of THE MEPHISTO WALTZ.

Done at the mid-80’s height of Goldsmith’s love for electronic syncopation a la RAMBO, EXTREME PREJUDICE and HOOSIERS, LINK has synth bounce and sparkling atmospheres to spare, wonderfully blending with the orchestra for an unhinged energy. But make no mistake that for all of its delirious fun, LINK is no musical joke to Goldsmith, who shows terrific, seriously suspenseful craft and pulse pounding runs in conveying this pursuit between lushly melodic beauty and the percussive beast. Given this eccentric carnival atmosphere, it’s no wonder that LINK has been released, and subsequently sold out on numerous labels. Now the consistent 11-track presentation lands in La La Land’s lap (a monkey-obsessed label if there ever was one), with clever design by Jim Titus and Jeff Bond’s liner notes nicely detailing Goldsmith’s inventive affinity for playing with apes, of which LINK stands as his most enjoyably playful primate.

Goldsmith would get to apply one of his most beautifully spectral scores to a lightning-attracting albino teenager for 1995’s POWDER, surely one of the stranger live action films that Disney put out as it showed a pseudo human E.T. trying to adapt to a distrustful town that sees him as more threat than messiah. The best way to hear POWDER is to imagine it as a continuation to the humanistic fantasy stylings he brought to Mel Gibson’s man out of time in FOREVER YOUNG, as well as a precursor to the terrans striving to touch the stars in FIRST CONTACT. Bucolic strings bring out some of Goldsmith most gorgeous thematic writing as he conjures a Christ-like figure who inspires a sense of wonder, the music soaring with the breathtaking, yet melancholy beauty of a character not destined for this earth, his persecutors given brass-filled menace..

One of the first major composers to get the electronic bug, Goldsmith’s use of synthesizers here are at their most lyrical in creating a sense of cosmic peace, joining with bucolic strings for long, enchanting passages, while instances of metallic eeriness recalls the approach of Vejur to further enhance to STAR TREK-ian properties of POWDER, But above all, one senses the special attachment Goldsmith had to this film in the poetry it could bring out of his music’s more cosmically romantic reaches. It truly colors one of his most extraordinarily heartfelt scores, which now gets a gloriously complete presentation from Intrada, expanding the score by thirty minutes. Jef Goldsmith, who also provides perceptive liners for Goldsmith’s inner workings to primate’s fevered mind, makes POWDER‘s notes especially interesting by detailing the composer’s determination to make POWDER light instead of dark.

Click on the link to buy the LINK soundtrack

Click on the link to buy the POWDER soundtrack