Home » Bones review The Brother in the Basement 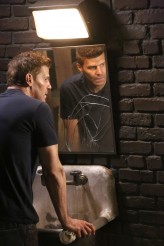 TV Review: BONES – Season 11 – “The Brother in the Basement”

A compelling reason for Brennan and Booth to return to work, but we lose Arastoo (rats) 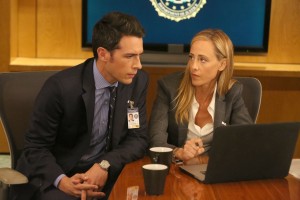 BONES’ eleventh season concludes its two-part premiere with “The Brother in the Basement.” The “brother” in this instance is Booth (David Boreanaz), who has wound up gut-shot in a futile effort to protect his sibling Jared from a criminal enterprise. We know from the previous episode that Jared is dead – his remains were initially mistaken for Booth.

Brennan (Emily Deschanel) is on the case, at the Jeffersonian all the time (her and Booth’s children are staying with her father) while she tries to find some evidence that will lead her and the others to the missing Booth.

Booth has actually embedded himself with some of Jared’s old Navy buddies, who are counting on stealing a list of undercover FBI agents that they can sell on the black market for millions of dollars. Booth not only wanted to protect his little brother, he wanted to protect his erstwhile comrades.

Brennan is indignant to learn that the Jeffersonian’s status as the best lab in the nation has suffered in her absence. She decides that she wants her old job back, because the work is important to her and, as she tells Cam (Tamara Taylor), if it turns out that Booth is dead, she will need both her forensics vocation and the nearness of her friends.

FBI Agent Miller (Kim Raver), who has suspected Booth of killing her partner, seems as though she may be the guilty party when the partner and his fiancée turn up dead. However, the real culprit is FBI computer expert Dr. Benjamin Metzger (Josh Casaubon), who tried to implicate Miller.

Booth’s true loyalties are found out by the thieves, who are still waiting for the list. Despite his injuries, Booth manages to overpower the leader of the group, who is trying to kill him, just before the police show up with Brennan.

Brennan is at Booth’s hospital bedside. In this instance, she forgives him for keeping her in the dark – he was trying to help his brother. She tells Booth that she really believes that they both ought to go back to the jobs that they excel at and love. When Booth protests that they’d agreed to leave that life behind, Brennan points out that Booth has gotten shot anyway. He doesn’t have her permission to be reckless and die, however.

At the lab, Arastoo (Pej Vahdat) sadly concludes that he’s got to leave. He doesn’t want to spend the rest of his life as an intern, and even though he loves Cam, he can’t ask her to give up the Jeffersonian, because she’d grow to resent him. Even though Cam loves Arastoo, she agrees.

It’s great to have Brennan and Booth going back to their respective callings, and it’s even better to have the show (through Brennan) acknowledge that she belongs in the lab, examining bone fragments and solving murders. Having her quit for civilian life did put a period on what might have been the final episode, but in character terms, it was counterintuitive. Booth actually might be happy staying home with the kids, but it wouldn’t work for the show to have Brennan working solo.

But alas Arastoo! While we understand why the character wants to progress with his career, we’ll miss Vahdat’s charm and humanism. (And it’s a shame Cam once again loses out romantically.)

It’s a pleasure to see Patricia Belcher’s formidable D.A. Julien get a workout here, and there’s a fun scene with Hodgins (TJ Thyne) being marginally worried that the handsome Metzger (before he’s outed as a villain) may hold some appeal for Angela (Michaela Conlin). It’s also pleasing to have Booth’s grief over the loss of his sibling noted by all characters, as is appropriate.

Mainly, it’s good to have the core BONES team reunited, without caveats or resentments. Onward, Season 11.