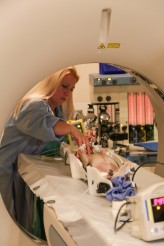 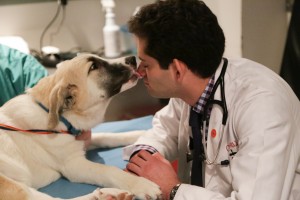 In National Geographic Wild’s VET SCHOOL, Saturdays at 10 PM, we follow a real group of students as they learn how to treat a wide variety of animals through their studies at Cornell University’s College of Veterinary Medicine in upstate New York.

We see Dr. Aziza Glass, DVM, in her fourth year at veterinary college in the documentary series. She now has her degree.

AX: It seems like any kind of medical training would be stressful under normal circumstances. How did adding cameras and a documentary crew to the process affect it?

AZIZA GLASS: Actually, I would say that working with the crew was much more relaxed than what I thought [it would be]. It really took me back to my background on stage. I went to Performing Arts High School back in Houston, Texas, so once the cameras were there, it kind of merged both of those worlds for me. I was able to teach to the lens and not have the stage fright and still be able to teach what I’m learning, which is veterinary medicine. So it was really nice. It wasn’t as stressful as what other people would think, but it wasn’t without its moments, let me put it that way.

AX: How did you go from performing arts to veterinary medicine?

GLASS: I did not know that I wanted to go into veterinary medicine until really late, compared to a lot of my classmates, really until I was a sophomore in college. I always liked singing and being on the stage and I essentially realized that I did not have Mariah Carey or Whitney Houston’s voice [laughs].

I always had an interest in animals and based off of what my family tell me, when I first learned how to use a remote control, I would always find a PBS station and watch some kind of nature channel. So I’ve been into animals for a very long time.

AX: What are procedures you enjoy, and what are the ones that you feel like, “Oh, I wish I didn’t have to do this”?

GLASS: Oh, gosh. For cats in general, just because they have what we call in the hospital “kitty minutes,” they can lose their patience really quick, and a mean cat with a snarl and everything, it just makes my skin curl up when I hear that snarl. It’s very unsettling, even after all this time [laughs]. But with horses, for instance, doing dentistry, I like it. I really found myself in vet school knowing that I really like equine dentistry.

AX: Do you have to anaesthetize the horse for that, or do you just restrain it?

GLASS: Well, we definitely do restraints, of course, and we do some sedation as well, just so the horse can loosen up its jaw a little bit, so that we can get up there and not move around as much while we take care of business. 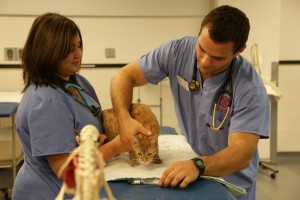 GLASS: Yes, exactly [laughs]. He’s standing the whole time. He’s not lying down on his back.

[For horses], being on their backs for a prolonged period of time does have its risks. So we try to avoid that as much as possible.

AX: And what would you most like people to know about VET SCHOOL?

GLASS: If I could not stress anything else about VET SCHOOL, I would say that I want people to start to gain a better appreciation for the [veterinary] field. I think a lot of times, people don’t realize that when you’re in vet school, you’re in medical school. I’m just not studying humans, but as you’ll see on the show, we’re doing a lot of the same procedures that a physician would do in order to diagnose what a cyst is, or to see why you are anemic, or how to treat dehydration, because a lot of the same methods, the anatomy and physiology, it’s comparative, and they’ll see that it’s medicine, and it’s not a lesser kind of medicine.

This interview was conducted during a party thrown by National Geographic for the Television Critics Association summer press tour at the Beverly Hilton Hotel.