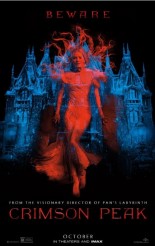 Going Gothic in a grand gesture 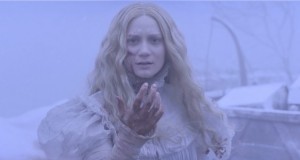 CRIMSON PEAK is as Gothic as it gets. Set in 1901 New York and northern England, it is not a ghost story, but rather, as our heroine Edith Cushing (Mia Wasikowska) says of her own writing, “a story with ghosts.” This isn’t to suggest that the ghosts aren’t quite scary when they appear, but it’s the mortals who drive the unabashed melodrama forward.

Edith is the devoted, brainy only child of adoring widowed father and self-made construction magnate Carter Cushing (Jim Beaver). Carter is instinctively wary when titled but penniless Sir Thomas Sharpe (Tom Hiddleston), with his sister Lucille (Jessica Chastain) in tow, presents a business proposition. Carter is even more resistant when Thomas seeks to court Edith, despite the fact that she already has the attention of handsome and kind Dr. Alan McMichael (Charlie Hunnam). Then one thing leads to another and we’re back at the Sharpe ancestral estate, a grand but decaying structure so deteriorated that snow falls through the partly destroyed roof.

Edith believes in ghosts and has since childhood, when the shade of her mother warned her of Crimson Peak. The Sharpe homestead is full of revenants and secrets, but Edith, despite being naïve in some matters, is determined to learn about both before they destroy her utterly.

The plot and the production design of CRIMSON PEAK are both so ornate and over the top that if director Guillermo Del Toro and his co-writer Matthew Robbins weren’t so absolutely confident of the world they create, the whole enterprise would topple over into self-parody. As it is, the poufs on Edith’s Leg of Mutton sleeves that are sometimes bigger than her head and some of the villain dialogue make us have to double down on our investment in the narrative.

Still, the lushness and sincerity of Del Toro’s vision and Thomas E. Sanders’ production design are breathtaking. The storytelling is in the sweeping JANE EYRE/REBECCA model, with a plucky young woman seeking to rescue her tragic love object from his demons, if that young woman were a writer determined to brighten everything up with her clothing choices. CRIMSON PEAK hews to a lot of the conventions of Gothic romance, but Del Toro and Robbins are aware that their viewers are in 2015. Concessions are made to the way characters talk and think, as well as to what we expect in terms of horror, but there’s no sending up what’s happening. It’s all go for broke amid the broken timber and spreading shadows and stains in the snow.

The ghosts and visions are marvelously creepy and foreboding, and Wasikowska throws herself into Edith’s brightness and passions with great conviction. Hiddleston is the ideal tormented protagonist and plays Thomas so that there are cases to be made for multiple interpretations of his motives until late in the day. Chastain does an admirable job with the complex Lucille and Hunnam conveys enormous decency as Edith’s steadfast admirer. As for Beaver, it’s a pleasure to see him bringing his take-charge talents and period accuracy to a sizable big-screen role.

CRIMSON PEAK won’t be for everyone, but for those who seek a realm where dark fairytale, horror and Gothic romance converge, this is the place.

Will there be a GREEN HORNET 2?
The Dork Side: Why does everyone love Charlie Sheen?
TCA News: The status of AMERICAN HORROR STORY Season 2
DORKING OUT - Episode 46: The Guardians Of The Galaxy Save Franchise F...