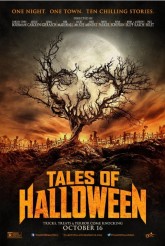 Although it is composed of ten separate October holiday-themes stories made by ten different teams of filmmakers, there’s a sense of indie joy vibrating all through TALES OF HALLOWEEN. This is short, mostly smart and funny horror that will be especially resonant for the kind of independent fare that felt like it was a lot more readily available back in the Seventies.

There are some name directors along with some lesser-known folks, but all of them deliver segments that are at minimum well-made and at best delightful and even scary. There are also a lot of horror directors appearing on camera, with John Landis and Joe Dante in significant speaking roles in two different shorts and Mick Garris and Stuart Gordon as costumed but recognizable party guests in a third.

Axelle Carolyn conceived the anthology and wrote and directed the effectively creepy “Grim Grinning Ghost” episode. The basic concept is that TALES OF HALLOWEEN all takes place in the same small town, where an all-knowing radio d.j. (Adrienne Barbeau) cautions her listeners to be careful. Elements of some shorts appear in others, providing a nice sense of continuity, and the final installment, “Bad Seed,” has the local police station reacting to some of the situations we’ve already seen. Los Angeles residents will recognize a lot of the neighborhoods, but there’s a nice balance of visual diversity and cohesion throughout the film. The whole enterprise has that seat of the pants determination to do something fast and good and bloody enjoyable that makes this kind of thing so delightful when it’s done right.

“Sweet Tooth,” written and directed by Dave Parker, contributes a solid new Halloween-specific boogeyman to the canon, along with at least one strong jump scare and brief performances from horror acting vets Caroline McWilliams, Robert Rusler, Clare Kramer and Greg Grunberg. Daniel DiMaggio does a strong job as the little boy stuck in the middle of the mayhem.

“The Night Billy Raised Hell,” directed by Darren Lynn Bousman (of the SAW franchise) and written by Clint Sears, casts the witty Barry Bostwick as an urbane demon who really knows how to make Halloween mischief.

“Trick,” which arguably has the most intriguing narrative twist in the anthology, is directed by Adam Gierasch and written by Greg Commons. It changes our perspective on what’s happening as it unfolds, revealing a second, more powerful horror beneath the one we think we’re seeing.

Carolyn’s “Grim Grinning Ghost” is a classic supernatural walk through the fog tale, with Lin Shaye warmly explaining to us what we’re witnessing.

“Ding Dong,” written and directed by Lucky McKee, is the one segment that tries to play with reality, asking whether we’re witnessing something supernatural or simply a nervous breakdown. A more decisive treatment seems to be warranted, given the primary emotional/situational issue surrounding the main characters. However, there’s no denying the bravura qualities of Pollyanna McIntosh’s character.

“The Weak and the Wicked,” directed by Paul Solet and written by Molly Millions, is a classic revenge tale set in the bleakest of urban areas. It’s straightforward and sure-handed.

“This Means War,” written and directed by John Skipp & Andrew Kasch, has no overt supernatural angle in its chronicle of fast-rising hostilities between the proprietors of two lawn displays, with a “hey, it could happen” attitude.

“Friday the 31st,” directed by Mike Mendez and written by Mendez and “Sweet Tooth” maker Parker, is a fun twist on the masked killer franchises, with a hor-adorable creature effect.

“Ransom of Rusty Rex,” written and directed by Ryan Schifrin, puts a horror spin on O. Henry’s classic “The Ransom of Red Chief.” John Landis is swell as the patriarch who won’t pay a penny, Sam Witwer and Jose Pablo Cantillo are entertaining as the none-too-bright kidnappers and the late Ben Woolf (to whom TALES OF HALLOWEEN is dedicated) is deft and fleet as the troublesome Rusty.

Finally, “Bad Seed,” written and directed by Neil Marshall, is a killer – in several senses of the word – pumpkin plot, just the thing to wrap up a grab bag that is mostly filled with bite-sized (and biting) treats.