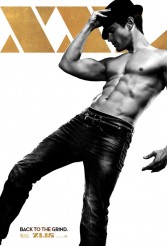 Unexpectedly sweet and hugely fun, a perfect one of what it is 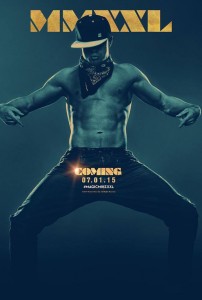 MAGIC MIKE XXL is an example of a sequel that improves on the original. In 2012’s MAGIC MIKE, we met the title character (Channing Tatum) and his cohorts at a Miami male strip club. The film registered as one of the least hysterical stories ever told about people who remove their clothes for a living.

MAGIC MIKE XXL is so amiable that it makes its relatively laid-back predecessor seem like a histrionic melodrama by comparison. Something is always happening in XXL, but it’s consistently humorous, often startling and usually very sweet, whether observing the generous friendship between the guys, seeing their flirtation with women or watching them embark on routines that are not only scandalous but designed to enhance the customers’ self-esteem, no small feat.

The plot is not complicated. Mike, now settled into his custom furniture business, is lured back for one more gig by his old crew, who are heading for a stripper convention in Myrtle Beach, South Carolina. Missing both the dancing and the camaraderie, Mike agrees – and then has a brainstorm about what their act should be like.

The movie is part musical – including not just dancing but singing by Matt Bomer and Donald Glover – and part road trip, minus the usual sulking, arguments and reconciliations that normally accompany this type of storytelling. The characters in MAGIC MIKE XXL are buddies. They razz each other, but are actually supportive, don’t try to tear each other down and don’t get into life-or-death quarrels about anything. They set each other a few fabulous challenges – some viewers will never look at a convenience store the same way again.

For a movie concerned with visual stimulation, MAGIC MIKE XXL also gives respect to women of all ages, shapes, sizes and ethnicities. Jada Pinkett-Smith, who tears into her emcee role like she’s been waiting to play it forever, has a character who addresses all other women as “queens” who deserve to be made to feel beautiful and adored. If this seems at odds with the universe of male strippers, MAGIC MIKE XXL is here to show how the two can harmonize symphonically.

There is some discussion of what happened to characters from the first film who are missing in action here. Those remaining include Tatum’s down-to-Earth, still wonderfully athletic Mike, Joe Manganiello’s driven, easily inspired Richie, who has taken over as the group’s leader, Bomer’s comparatively straitlaced aspiring actor Ken, Kevin Nash’s burly, staunch Tarzan, Adam Rodriguez’s cheerful frozen-dessert entrepreneur Tito, and Gabriel Iglesias as loyal costumer Tobias, with Glover as a latecomer who has a gift for songwriting.

The film marks the feature directorial debut of Gregory Jacobs, longtime assistant of Steven Soderbergh, who directed the original MAGIC MIKE and here serves as cinematographer and editor. Reid Carolin, who penned the first one, wrote the script. Alison Faulk once again did the terrific choreography. The filmmakers all seem to want the viewers to feel like we’re out with good friends, laughing, happy, always engaged, never bored or insulted or alienated.

One could criticize MAGIC MIKE XXL for its barely-there storyline, but its combination of skill and goodwill and humor and affection add up to a movie where the feel-good factor really is extra-extra-large. It is not any more ambitious than its characters, but it’s a splendid example of what it is. If accomplishing laid-out goals, however modest, is a definition of success, this succeeds completely.