Not action-filled, but with many skin-prickling dramatic moments 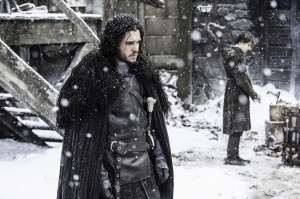 What the GAME OF THRONES episode “The Gift” lacks in big action sequences – yes, we get pit fights and Sam (John Bradley) trying to defend Gilly (Hannah Murray), but these are scant by the series’ standards – it more than makes up for in major drama. We lose well-loved Maester Aemon (Peter Vaughan). We get the return of Ghost. We get more Diana Rigg as Lady Olenna. We get the first meeting of Daenerys Targaryen (Emilia Clarke) and Tyrion Lannister (Peter Dinklage), which has awesome implications. And we get – praise the Seven – the beginning of the comeuppance of Cersei (Lena Headey).

Thorne notes that this leaves Sam with few friends. When Maester Aemon dies in his bed after a brief bout of confusion, Sam has even fewer, but he has one more than he reckons. After Sam gives the eulogy for Aemon, two members of the Night’s Watch attempt to rape Gilly and beat Sam to the ground for trying to stop them. Jon’s direwolf Ghost appears. This is enough to make the would-be rapists run away. Gilly first tends to Sam’s wounds and then tends to his virginity. All of this reaffirms that Gilly is resilient, Sam is very brave (as he likely would have been killed by his two “brothers”) and that it’s great to have a direwolf in your corner. For those viewers who’ve been worried about Ghost’s health and whereabouts, this clears that matter up as well.

At the battle camp of Stannis Baratheon (Stephen Dillane), Davos (Liam Cunningham) says they’ve had fifty horses die and five hundred mercenaries desert overnight. He counsels a retreat to Castle Black because of the horrible weather.  Stannis insists that he cannot retreat – he’ll triumph or die against the Boltons. When Davos leaves, Melisandre (Carice Van Houten) suggests that Stannis needs to make another sacrifice of royal blood. She means Stannis’ young daughter Shireen. Stannis refuses, but is clearly troubled. Much as we’d like to see the Boltons beaten into the ground, Davos seems to be on the right side here (as he usually is), but there’s no getting around Stannis’ determination. As for Melisandre, we heartily wish she’d shut up already. When she describes the visions that “prove” to her that Stannis will win, we can easily come up with alternate explanations for what she’s seen. It doesn’t bode well that Stannis doesn’t exile her for suggesting the killing of his only child.

At Winterfell, Sansa (Sophie Turner) has been locked in her room every day and abused every night by her husband Ramsay (Iwan Rheon). Sansa asks Theon (Alfie Allen) for help – if she leaves a lit candle in a particular tower window, she has been told help will come. Theon, terrified of Ramsay, immediately betrays Sansa. Sansa does get a few digs in at Ramsay, asking what will happen to Ramsay’s inheritance, given that he’s born on the wrong side of the blanket, if his father’s pregnant wife has a male child. Ramsay insists he’s been made legitimate, and Sansa points out that there’s some question as to the legitimacy of King Tommen (Dean-Charles Chapman), who issued the legitimacy decree. Ramsay brings Sansa to the flayed body of the old woman who had tried to help her. Of course, neither Ramsay nor Sansa knows that Brienne (Gwendoline Christie) is nearby. Granted, Brienne hasn’t seen a signal that Sansa is in peril, but the heroic warrior woman may not wait much longer.

We understand Sansa’s desperation, but given the amount of times she’s been betrayed in general, and by Theon in particular, it seems like she ought to have known better. It’s still very hard to feel anything except deep irritation at Theon and Ramsay is a character who deserves to be killed repeatedly by every other character in the story. Since that can’t happen, we can but hope he will eventually meet with some unforeseen but hideous fate.

In Dorne, the unharmed Princess Myrcella (Nell Tiger Free) is brought to see her uncle – actually, her father, though she doesn’t know that – Jaime (Nicolaj Coster-Waldau). To Jaime’s astonishment, Myrcella says she’s perfectly happy in Dorne, is in love with Dornish Prince Trystane Martell and doesn’t want to go back to King’s Landing. She points out that Jaime has no idea of who she is. Meanwhile, Jaime’s ally Bronn (Jerome Flynn) is languishing in the Dornish dungeon in a cell opposite the Sand Snakes. Obara Sand (Keisha Castle-Hughes) flirts with Bronn, then tells him the blade she slashed his arm with was tipped with poison. Obara decides she likes Bronn and tosses him the antidote before he’s too far gone.

This seems all to the good. If Myrcella can stay in Dorne and away from the craziness of her mother Cersei, more power to her. Bronn is a likable character, so his survival is a plus. Events in Dorne were not resolved in A DANCE WITH DRAGONS, the latest (so far) to be published of George R.R. Martin’s books in the series, but it feels like between Cersei, the Faith Militant, Highgarden, Winterfell, Stannis and whatever Daenerys will do, there’s more than enough in the mix surrounding the Iron Throne. If Jaime and Bronn go back to King’s Landing empty-handed, it feels as though the overall story will be none the poorer for it, though if this is all we get from Dorne, it’s been a strange though not unentertaining detour.

In King’s Landing, Olenna Tyrell (Diana Rigg) seeks out the High Sparrow (Jonathan Pryce) and finds that he’s a man who cannot be bribed. Olenna’s grandchildren Margaery (Natalie Dormer) and Loras (Finn Jones) must be tried for their offenses to the Faith. The best Olenna can do is threaten the High Sparrow and his followers with starvation if Highgarden cuts off its supplies to King’s Landing, which it will if Olenna’s grandchildren are not released. The High Sparrow counters that the poor are many and Olenna and her kind are few. He seems to think that a governmental overthrow is in the making, and if he wasn’t such a homophobe and if his followers didn’t seem such humorless zealots, we might be on his side. And then … but that would be getting ahead of the story.

King Tommen is distraught that he cannot free his wife Margaery. Cersei offers to see the High Sparrow in his stead. She goes to sweetly gloat at Margaery, who is miserable in the dungeon and fully, completely hates Cersei. Margaery points out that Cersei’s shortcomings as a human being are probably why Tommen so readily embraced Margaery and wanted away from his mother.

Olenna is in an understandably foul mood when she meets with Baelish (Aiden Gillen) in the ruins of his once-posh brothel. She thinks he had a hand in the arrest of her grandchildren and reminds him that as they both conspired to murder King Joffrey, their fates are entwined. She also has a failsafe that will cause Baelish to disappear should something happen to her. Baelish tells Olenna that he has a “gift” for her, just as he had for Cersei, a handsome young man.

This would be Lancel Lannister (Eugene Simon), Cersei’s cousin and one-time lover, assassin of King Robert and now a member of the Faith Militant. When Cersei goes to see the High Sparrow after her visit with Margaery, the cleric brings Lancel out, explaining that the young man had a lot on his conscience but has unburdened himself – with a lot to say about Cersei. The High Sparrow then has Cersei arrested. Of all of the bullies and power abusers in GAME OF THRONES, Cersei has been arguably the most complex. We even have some sympathy for her, given her father’s dismissal of her and her desire, however twisted, to protect her children. However, seeing that Cersei is the one who gave the High Sparrow the army he’s now using to subdue everyone who disagrees with him because she didn’t want her son Tommen to have anyone in his life except her, the predicament could not happen to a more deserving soul. It’s a splendid scene, played beautifully by all participants.

In Meereen, Daario (Michiel Huisman) frets to Daenerys as they lay in bed together that she’ll stop seeing him once she’s married to Hizdahr (Joel Fry). Daenerys assures Daario that Hizdahr understands it’s a political marriage and won’t expect his wife’s fidelity. Daario then counsels Daenerys to kill every master she can round up. Daenerys refuses.

Tyrion talks his way into being bought along with Jorah (Iain Glen), so he’s present at the fighting pit. While the first group of fighters, who don’t include Jorah, have at each other, it is said that the Queen is present. Daenerys is indeed here – very reluctantly – alongside fiancé Hizdahr, who says it’s customary to stay through all of the day’s matches. Jorah strides into the arena and takes on all comers. Daenerys is impressed – until Jorah removes his helmet.

Since Daenerys previously banished Jorah for treason, she demands that he be removed from her sight, but Jorah says he has brought her “a gift.” Tyrion introduces himself as that gift and says his name. Daenerys is astonished, ending the episode on a great “where do we go from here” note