The advent of the admirable Jonathan Pryce and a Sansa surprise 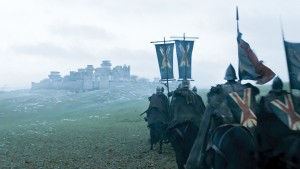 GAME OF THRONES starts to really diverge from the books in “High Sparrow.” Although the title element is more or less the same, Sansa Stark (Sophie Turner) is on a whole new path, and there are some other notable changes at the Wall.

Arya (Maisie Williams), annoyed with getting to do no more than sweep the floor at the House of Black and White, learns that people come here to be given a cup of a special liquid and then die. She says she’s ready to be a Faceless Man, but Jaqen Hghar (Tom Wlaschiha) says that for someone who claims to be no one, a girl has a lot of Arya Stark’s possessions. With some regret, Arya throws most of her belongings into the bay, but cannot bear to dispose of her sword Needle. She hides the weapon among the rocks. Who knows what this portends for Arya, but Williams grows in quiet ferocity and conviction in every episode.

Roose Bolton (Michael McElhatton) finds himself lecturing his son Ramsay (Iwas Rheon) after Ramsay has flayed alive some recalcitrant Northern lords. Roose says they need some people to be loyal to them in order to hold the North. If the Northerners will only accept a Stark, there’s a solution – marry Ramsay to Sansa.

When Sansa learns of this from Baelish (Aiden Gillen), she is furious and horrified – Roose murdered Sansa’s brother Robb. Baelish assures Sansa she can refuse the marriage, but if she accepts it, she’s in a great position to get revenge. So Sansa accepts. This poor young woman. She’s gone from being engaged to the appalling King Joffrey to the one person in the kingdom who seems like an even bigger monster. Meanwhile, Brienne (Gwendoline Christie) plans to rescue Sansa.

Down in King’s Landing, the new king, Joffrey’s little brother Tommen (Dean-Charles Chapman) is really enjoying married life and his queen Margaery is having a great time both in her marriage bed and with her adoring spouse. Tommen’s mother Cersei (Lena Headey), the former queen, smiles outwardly and seethes inwardly. When she hears that a group of religious zealots who call themselves Sparrows punish the unrighteous, she takes it upon herself to find their leader, the High Sparrow (Jonathan Pryce). The High Sparrow appears mild-mannered, self-effacing and witty as he tends to the poor flocking around him. Cersei tells him they both care about the same things. With the hindsight that comes from having read the books, it’s difficult to discern if this scene hints at where this new alliance is going (there are subtleties aplenty for those in the know), but since anyone who watches GAME OF THRONES is aware that it’s impossible for Cersei to enter any situation without making it worse, the question is what new catastrophe is brewing now. Pryce fits in beautifully with the series, and injects great charm into his character.

At the Wall, Jon (Kit Harington) shows that he’s serious about being Lord Commander by executing Janos Slynt (Dominic Carter) for refusing to accept Jon’s order to take command of and begin repairs on a garrison outside the Wall. Stannis (Stephen Dillane) approves and wants Jon to use his influence with the Wildlings. When Jon refuses again, citing the Watch’s refusal to get involved in politics, Davos (Liam Cunningham) quotes the part of the Watch oath in which the men of the Night’s Watch swear to defend the realms of men. With what’s coming from beyond the Wall, Jon needs to help marshal an army bigger than the Watch in order to keep that oath. Jon can’t help but see the wisdom in Davos’ observations.

Tyrion (Peter Dinklage) insists on getting out of the wagon and going to a tavern, despite Varys’ (Conleth Hill) concerns. Tyrion is kidnapped inside the tavern and kidnapped by Jorah Mormont (Iain Glen) who says he’s taking Tyrion to the queen.

We know that Jorah probably means Daenerys, but since Tyrion probably thinks he means Cersei, let’s hope the youngest Lannister doesn’t die of a heart attack before the next episode.

The whole episode gives us a lot to ponder. Will Jon wind up creating a massive army to sweep the whole of Westeros up into a war with the White Walkers? What is Baelish up to, and will Sansa survive it? What’s brewing in King’s Landing? The questions are posed entertainingly, and we can’t wait to learn the answers.