Home » After the Fall soundtrack review 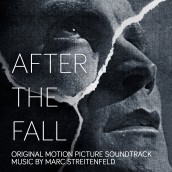 CD Review: AFTER THE FALL soundtrack

Marc Streitenfeld has provided muted, morally ambiguous scores before to oil workers facing off against killer wolves in THE GREY and a professional hitman wanting his pay in KILLING THEM SOFTLY, scores filled with truly interesting “ambiences” and unexpected instrumentation. But perhaps none of Streitenfeld’s experimentally minded scores of this nature hits more weirdly, or more effectively at home than AFTER THE FALL, wherein Wes Bentley’s suburban dad truly goes off the criminal rails to avoid falling into poverty after his firing.

Perhaps one way to describe Streitenfeld’s unique work at its most effective here is to imagine Carl Orff or Saint-Saens on acid, as rhythmic, sometimes reversed bells capture a once-complacent man losing his innocence while plunging into a gun-toting rabbit hole. Plucking mandolins and icy strings give this FALL  perhaps an even more of an emotionally chilling environment then he memorably applied to the doomed survivors of THE GREY, a subtle feeling of tragedy in AFTER THE FALL that’s played with aching strings, and at times almost wistful, whistling sustains. Even samples resembling whale calls appear in this deceptively spare, yet hauntingly melodic score, which subtly, and powerfully achieves its goal of turning reality upside down – a feeling of childhood lost when the youth-instilled dream of the rewards that come with following the rules get economically shattered.

Click on the link to Purchase the AFTER THE FALL soundtrack

Article Source: Assignment X
Article:CD Review of  the AFTER THE FALL soundtrack