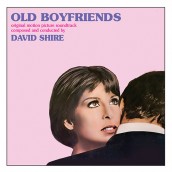 In one of the more ironic scoring assignments, David Shire was put in the position of scoring his then-wife Talia as a character who sorts her romantic love life out on screen, here playing a psychiatrist who flees her husband, bounding about the county to do some serious self-therapy with a rogues gallery of exes that include the acting likes of Richard Jordan, Keith Carradine and even John Belushi. With the actress capitalizing on her ROCKY role as Adrian to show she had far more range in this and her other star vehicle WINDOWS, one might expect a somewhat treacly romantic score given the subject of a woman pursuing self-worth through her old romantic adventures. But what Shire delivers is a score full of suspenseful passion, unexpected high drama that’s way more along the strong, dramatically orchestral lines of his classic women’s score to NORMA RAE than the frothier, jazzy likes of BED AND BREAKFAST (scored for Shire long after he’d found new love with GREASE‘s Didi Conn).

OLD BOYFRIENDS is full of thematic, self-discovering gestalt, angst embodied in rhythmic strings, tender guitars and poignant flutes that convey a voyage of inner discovery, buffeting its heroine in highly emotional winds – with all paths leading back to poetic self-reflection. It’s truly gorgeous, heartbreakingly thematic work that ranks among the best instances of a male composer touching a feminine sound, and feeling. It’s a thematic power that’s especially tearful and devastating via violin during its big “Love Scene,” and poundingly horrific return to the scene of attempted suicide. It’s a power that no doubt owes itself to the fact that Shire intimately knew his star at the time. The return to OLD BOYFRIENDS 35 years later has lost none of its impactful feeling, musical emotion that’s well psychoanalyzed by Tim Grieving’s liner notes. It’s a soundtrack that definitely makes me want to go on a hunt to watch this essentially lost movie itself.

Click on the link to Purchase the OLD BOYFRIENDS soundtrack