Home » Game of Thrones review Season 5 The Wars to Come

It’s back, and off to a fine if relatively quiet start 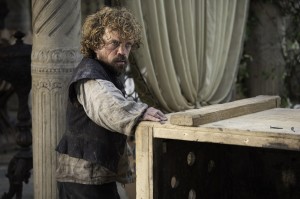 For those who love it (and most of its viewers do), GAME OF THRONES could not have come back a moment too soon. It picks up pretty much where last season ended. There isn’t a lot of recapping, per se, but the first episode of Season 5, “The Wars to Come,” takes time to let us – and the characters – understand how recent massive changes have affected them.

With the death of their father Tywin Lannister (Charles Dance, graciously doing a cameo as a corpse), Jaime (Nicolaj Coster-Waldau) suggests to his sister/lover Cersei (Lena Headey) that now is the time for them to pull together against their enemies in order to take over the Lannister legacy. True to form, Cersei isn’t having it. She’s figured out that Jaime let their other brother Tyrion (Peter Dinklage) escape from prison – which led directly to Tyrion killing Tywin – and Cersei is far too angry and scared to reconcile with her twin.

At Tywin’s funeral, Cersei is approached by her cousin Lancel (Eugene Simon), who she has previously used as lover and pawn. Lancel is now quite changed – he’s become a religious person, a “sparrow,” and urges Cersei to find religion, too.

Margaery (Natalie Dormer), now queen by virtue of her marriage to Cersei’s younger son Tommen (Dean-Charles Chapman), is told by her brother Loras (Finn Jones) that she’s now stuck with Cersei staying in King’s Landing. Without Tywin to insist on it, there’s no way that Cersei is going through with marrying Loras and going to Highgarden. Margaery seems unconcerned.

Tyrion, meanwhile, has endured a sea voyage in a crate, accompanied by Lord Varys (Conleth Hill). Varys believes Tyrion, with his intellect, can help create a new Westeros – by aiding Varys and his allies in putting Daenerys Targaryen (Emilia Clarke) on the throne. Despite Tyrion’s cynicism, he and Varys head for Meereen.

Daenerys is having trouble ruling Meereen. A group calling themselves Sons of the Harpy are killing her Unsullied soldiers and people from Yunkai are begging her to reopen the human-fight-to-the-death pits. Daenerys’ lover Daario advises her to reopen the pits and to display her remaining dragons. The largest dragon, Drogon, has flown away after killing a little girl. The other two dragons, Viserion and Rhaegar, are locked in a dungeon, and spew fire at Daenerys when she tries to visit them.

At the Wall, Stannis Baratheon (Stephen Dillane) says he’ll spare Wildling leader Mance Rayder (Ciarian Hinds) if Mance will “bend the knee” and tell his followers to fight for Stannis. Jon Snow (Kit Harington) tries to persuade Mance to save himself and his people, but Mance refuses, even at the cost of being burned at the stake. Melisandre (Carice van Houten) takes the execution as an opportunity to make a political/religious statement on the fate of those who don’t accept her God, and accept Stannis as king. As Mance burns, Jon ends his suffering by shooting him through the heart with an arrow.

“The Wars to Come” is almost demure, at least by GAME OF THRONES standards. There’s some sex, a slashed throat and of course Mance’s death, but mostly the episode is about making sure we know where everyone is, physically, emotionally, psychologically and politically.

Since all of the characters run from intriguing to fascinating, it’s no hardship to sit down with any of them. Tyrion and Varys are arguably the best pair on view – not only do Dinklage and Hill play off one another brilliantly, but they get splendid dialogue. When Varys praises Tyrion’s compassion, Tyrion reminds the other man that Tyrion killed his lover and shot his own father Tywin with a crossbow. Varys responds in a serene tone, “I never said you were perfect.”

We feel terrible for both Daenerys and her dragons, a situation that surely cannot hold. We also wonder what the heck is going to happen once it alters and what, if anything, Daenerys can do to forestall rebellion by a free but restless populace.

It’s rather amazing to see how, no matter how many pieces are removed from the playing board, King’s Landing remains a hotbed of riveting conspiracy. Cersei all by herself seems liable to explode in any direction, with Headey giving her such roiling fury that she seems dangerous even when perfectly still.

The one quibble here is the Brienne/Podrick sequence. We care greatly about the characters and the actors are terrific, but it might have been better to save them until they had a bit more to do.

Overall, “The Wars to Come” seems a sign of great things to come, and it’s a worthy entity unto itself.