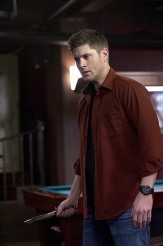 Bobby, an amusing view of Heaven and movement on the plot arcs 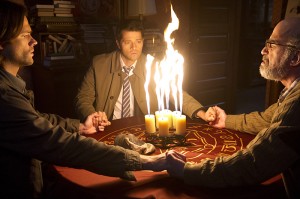 Jared Padalecki as Sam, Misha Collins as Castiel, and Richard Newman as Oliver in SUPERNATURAL - Season 10 - "Inside Man" | ©2015 The CW/Carole Segal

Although it’s generally not a good thing on SUPERNATURAL when Sam (Jared Padalecki) and Dean (Jensen Ackles) are separated for much of the episode, it actually works in “Inside Man.” Although the brothers come together at a few points, Sam is mostly off with Castiel (Misha Collins), still trying to figure out how to rid Dean of the Mark of Cain, while Dean, unaware of what Sam is up to, has his own adventures, first with Rowena (Ruth Connell), then with Crowley (Mark A. Sheppard).

Sam gets out for an evening by himself by inviting Dean to come with him to a French movie. And not just any French movie – Sam enthuses, “It’s about a mime who’s secretly a cockroach.” As Sam expects, Dean declines. Sam is free to rendezvous with Castiel. They think their only chance to rid Dean of the Mark is to get information about it from Metatron (Curtis Armstrong), the unscrupulous Scribe of God who is rotting in Heaven’s prison. Castiel’s angel friend Hannah possesses a man just long enough to inform Cass that he’s not allowed into Heaven precisely because everyone is afraid he’ll try to get Metatron out in order to help Dean.

Sam and Castiel then visit a psychic who is able to contact Bobby (Jim Beaver), who is holed up in his own private Heaven. In Bobby’s case, he’s in his old cabin with a radio playing Kenny Rogers’ “The Gambler,” unlimited alcohol and gentlemen’s magazines. Sam replaces Rogers on the radio, and Bobby of course is willing to do whatever he can.

What Bobby finds when he gets out of his particular Heaven is one of those inspired gags that SUPERNATURAL manages to toss off with enough frequency to keep us all coming back. Bobby finds that he’s in Heaven’s “Robert Singer” (Bobby’s given name) corridor, with the door to a little private Heaven for each Robert, Roberto and Roberta Singer who’s ever lived and died. Bobby creates the equivalent of a riot by opening all the doors, creating enough havoc that he can get open a way for Castiel to get in; they then go to Metatron’s cell. Castiel spirits Metatron back to Earth, while Bobby stays to face the angry angelic music.

Sam and Castiel are better prepared than usual this time around. Castiel takes Metatron’s grace, which makes him human, and Sam shoots Metatron in the leg, proving he means business. Alas, after all this trouble, Metatron says he was lying about knowing anything about the Mark. He can, however, lead Castiel back to the remnants of Castiel’s grace, which Metatron took from him last season.

Dean is prepared for a pleasant night at the bar, eating junk food, drinking and hustling preppy pool players. However, Rowena wants Dean dead. She shows up and possesses the preppies. Dean knocks them out, but gets control of himself before the Mark can make him kill them. Dean even refrains from killing Rowena, who leaves in a huff.

Enter Crowley himself. The King of Hell and the older Winchester have a talk. Dean tells Crowley that, yes, Crowley is a little softer. Maybe it’s the human blood Sam pumped into him. Dean counsels Crowley to send Rowena away; family is more than blood, and Rowena isn’t Crowley’s family. Crowley finally gets back to his original realization about his mother, which is that she only wants him for his power and not because he’s her son. Crowley sends Rowena away rather than killing her. Rowena has unwittingly given Crowley something to think about, saying that any curse can be lifted, and the Mark of Cain is simply a curse.

Bobby has sent Sam a letter (via Castiel), essentially warning him to be careful, but saying he’s sure Sam will do the right thing.

It’s great to see Beaver as Bobby again, and Armstrong is essentially perfect as the smarmy jerk we love to hate. It’s refreshing to see that Sam and Castiel are getting somewhat wiser with experience. It’s fun to see Dean and Crowley share a scene where they’re both wary and unsure of just what’s going on here. It’s a relief to see Rowena get out of Crowley’s throne room.

But above all, it’s a pleasure to hear the dialogue in “Inside Man,” which has consistent winners. There’s the psychic declaring that Castiel can’t be an angel because “I’m an atheist,” there’s the Heavenly p.a. system announcing that “The Bobbies are surly” and there’s Crowley addressing Dean as “Squirrel” and getting called “Boris” in return. SUPERNATURAL is competing against plenty of other genre shows tackling issues of big good, big evil and big ambiguity. The themes are perhaps too universal for any show to stand out on that basis alone. It’s the details that make SUPERNATURAL unique, and here, those details are delicious.