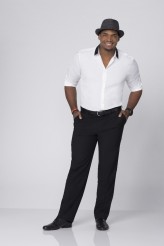 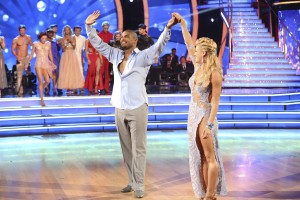 It’s inevitable every season on DANCING WITH THE STARS. Rumors fly of a hook-up between one or more of the couples. Sometimes it’s true, sometimes we are lead to believe it’s true for ratings. Either way Val Chmerkovskiy has had his fair share of  tongues wagging, first with Kelly Monaco in the all-star season and then last season with Janal Parrish. Derek Hough publicly hooked up with Shannon Elizabeth his second season on the show and Mark Ballas spent intimate non-rehearsal time with Sabrina Bryan, as did Karina Smirnoff with Mario Lopez. This season’s “Are they or aren’t they?” couple is Robert Herjavec & Kym Johnson. Their connection is so real and the time they spend together is so genuine that their affection for one another is obvious, whether or not there is more to it remains to be seen.

Regardless of their true relationship status, Herjavec & Johnson earned a commendable 34 points this week, tying for fourth place with big contenders Riker Lynch & Allison Holker. Third place was earned by the beautiful Rumer Willis & Val Chmerkovskiy with 35 points. Nastia Liukin & Derek Hough came in second with 36 points and the charmingly radiant Willow Shields & Mark Ballas came in first with an almost perfect score of 39 points, thanks a lot Len! Stay tuned next week for the self promotional night of Disney.

Chris Soules (The Bachelor) and his partner Witney Carson
Flat. Inaba said he looked like he was enjoying himself. Goodman said that his Rumba just wasn’t great. Hough said he was missing that connection with his partner. Tonioli said his turns were better.
Scores: Inaba –7, Goodman – 6, Tonioli – 7,  Hough –  7, Harland – 7

Noah Galloway (War Vet) and his partner Sharna Burgess
He can do with one hand what most can’t do with two. Inaba said his Contemporary was profound. Goodman stood up and gave him a standing ovation. Hough said he was astonishing. Tonioli said his spirit soars.
Scores: Inaba – 8, Goodman – 8, Tonioli – 8, Hough – 8, Harland – 8

Nastia Liukin (Olympic gymnast) and her partner Derek Hough
Perfection! Inaba said her Argentine Tango was incredible. Goodman said it was fantastic but not heartfelt. Hough said she nailed it. Tonioli said it was a stunner.
Scores: Inaba – 9, Goodman – 8, Tonioli – 10, Hough – 9, Harland – 9

Rumer Willis (actress) and her partner Valentin Chmerkovskiy
My favorite. Inaba called her Waltz powerful. Goodman said it was great but a little too contemporary. Hough said it was beautiful. Tonioli called it striking.
Scores: Inaba – 9, Goodman – 8, Tonioli – 9, Hough – 9, Harland – 9

Patti LaBelle (singer) and her partner Artem Chigvintsev
Her best! Inaba called her Jazz performance amazing. Goodman said it was full of rhythm. Hough said she had so much fun watching her dance. Tonioli called her hot.
Scores: Inaba – 7, Goodman – 7, Tonioli – 8, Hough – 7,  Harland – 7

Riker Lynch (actor) and his partner Allison Holker
Strong. Inaba said his Tango was a bit off. Goodman said it was better. Hough said he popped. Tonioli said it was a proper Tango.
Scores: Inaba – 8, Goodman – 8, Tonioli – 9, Hough – 9, Harland – 9