The actor talks the final season 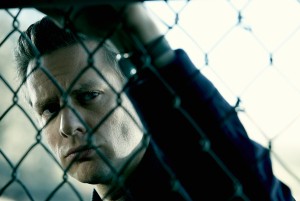 At the end of six seasons, FX’s JUSTIFIED, adapted by Graham Yost for television from Elmore Leonard’s novella FIRE IN THE HOLE, is blazing its way into the sunset on Tuesday, April 14.

For the entirety of JUSTIFIED, Jacob Pitts has played U.S. Deputy Marshal Tim Gutterson, arguably the most level-headed and laid-back member of that branch of law enforcement in Harlan County, Kentucky. Tim’s colleague Raylan Givens (Timothy Olyphant) is prone to disobeying orders and boss Art Mullen (Nick Searcy) is prone to getting exasperated, but Tim tends to roll with whatever is going on around him while still getting the job done.

Pitts, who hails from Connecticut, has appeared in a number of feature films, including K-19: THE WIDOWMAKER, EUROTRIP, ACROSS THE UNIVERSE and 21, and costarred as real-life WWII soldier Bill “Hoosier” Smith in the HBO miniseries THE PACIFIC. In conversation, Pitts is genial and seems reluctant to say anything that might be construed as immodest.

ASSIGNMENT X: Do you know why you were cast in JUSTIFIED?

JACOB PITTS: No clue. I think that has been a great long con. I’ve snowed them.

AX: That is, was there something they told you when you went in to audition about, “Try it this way” or “We like the way you do this”?

PITTS: I didn’t go in to audition. It was a straight-up offer. I think what happened was, Graham [Yost] and I met doing this miniseries called THE PACIFIC, in which I played a Southern-derived character who’s from Indiana but his vernacular, as written in the book, had a lot of hillbilly to it, and I looked up some people from there and came up with an attitude based on relatives of mine and various other sources, and I think Graham just thought that was me, because while we were shooting it, I just was in that voice and in that demeanor the whole time, and that’s why he cast me [in JUSTIFIED]. And then it took a season’s worth of calibration – “Oh, you don’t want me, you want this guy [I was playing], okay.”

AX: Is the character Tim Gutterson in the original FIRE IN THE HOLE, or was he written for you?

PITTS: He was written for me.

AX: So you actually inspired the character.

PITTS: Yeah. They really took on board a lot of suggestions that I had and they would rightly thumbs-down other ones.

AX: Can you name any of the ones they took on board?

PITTS: The idea that he had a military background – I have a couple of lines in there that I’m very proud of that I came up with on the spot. One was in Season 2. I’m assigned to watch Raylan, he says he’s going to ditch me and then I just say, “I love this sh*t, this s*it makes me hard.” That was my line. There have been a couple over the years that I’m pretty proud of.

AX: Have you continued to have input into Tim over the years?

PITTS: Yeah, I think that’s why it’s not getting any better than this. I’ve heard about other shows – I’ve been on some other shows intermittently, and there’s nothing like the level of collaboration and input everyone kind of gets on [JUSTIFIED]. I understand things are not normally like this, and I’d just be terrible to work with after this, terribly spoiled.

AX: How do you feel Tim has evolved over the seasons?

PITTS: I think he’s just more of a three-dimensional person in a way. He started out and all you knew was that he was a scout sniper, and then I think we added some post-traumatic immaturity into it, and then in Season 6, I guess there are a couple of other things.

AX: Do you have a favorite episode or a favorite scene in what we’ve seen so far?

PITTS: I really liked doing that scene with Ron Eldard [in Season 4], where he’s got roadside bombs and he’s trying to get us to blow each other up on the side of the road in the phone call with him. I really liked that one. I like them all. Everyone’s just so great to work with.

AX: This final season, you’ve got Sam Elliott as the smooth antagonist Avery Markham on the show. How was it working with him?

PITTS: It was great. I’m trying not to be boring. You want to be cool talking to Sam Elliott, so thank God there’s dialogue, because you will not be the cool one in that conversation.

AX: How about working with Mary Steenburgen, who plays Katherine Hale?

PITTS: We had a brief scene together last season where I barge into the room, tell them to put their hands up and get on the deck, and she just stood up so demurely and looked at me and I forgot what I was trying to get done. So thank God I haven’t had a scene with her this season, because you’d just see me cry.

AX: How does Tim feel about the “Get Boyd Crowder at all costs” thing that’s going down in Season 6? Is he on board with that?

PITTS: Sure. I think he thinks of himself best as if he’s a dog on the hunt, and that’s a good target and that’s who he is.

AX: Are you going to miss JUSTIFIED, or do you feel like six seasons is enough?

PITTS: I think that’s it for me. I think I’m done. The ratio of good work to bad work in your average actor’s career being what it is, I think it’s safe to say this is probably, most likely the pinnacle.

PITTS: I’m going to be on an episode of COMEDY BANG BANG, that’s going to be coming out this season, on IFC.

AX: Would you like to do more comedy after this?

PITTS: Oh, I’d love to do that, sure. I’m more of a half-hour, fifteen-minute people doing funny voices type of person. I think it’s way more in my wheelhouse than JUSTIFIED is, to be honest.

AX: What would you most like people to know about JUSTIFIED Season 6?

PITTS: It’s my favorite season, easily, and I think everybody has gone about it realizing it’s the last one and it’s the last time to love it.

This interview was conducted at Fox/FX’s party for the Television Critics Association at Pasadena’s Langham-Huntington Hotel.