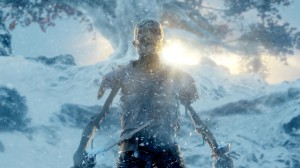 Okay, who saw that coming? Put your hands down if you read the books, that’s cheating. It wasn’t that surprising that, in the GAME OF THRONES Season 4 finale “The Children,” Jaime Lannister (Nicolaj Coster-Waldau) broke Tyrion (Peter Dinklage) out of prison rather than see his little brother executed for a murder he didn’t commit. It wasn’t even that surprising that Varys (Conleth Hill) helped Tyrion escape – we know Varys respects Tyrion. However, Tyrion finding himself in the corridors of the castle, finding his ex-lover/current accuser Shae (Sibel Kekilli) in Tywin’s (Charles Dance) bed was fairly shocking. Shae went for a knife and Tyrion wound up strangling her to death. This was nothing, however, compared to Tyrion confronting his father Tywin while Tywin is in the privy. Since Tyrion has a crossbow, the unruffled Tywin talks gently (if condescendingly) to his younger son, insisting that he would never let Tyrion really be executed. Tywin refers to Shae as a whore. Tyrion tells Tywin not to use the word again, Tywin says it again – and Tyrion shoots his father with several crossbow bolts while Tywin is still seated on the privy. As stunning moments go, in terms of both shock and dramatic heft, that’s right up there.

Before all of this, Cersei (Lena Headey) confronts Tywin and says she refuses to marry Loras Tyrell. When Tywin tells her she must, and that he can literally force her to do it, Cersei says she’ll tell everyone the truth if he tries it. When Tywin seems not to know what she’s talking about, Cersei specifies that it’s the incest between her and Jaime – and she’s shocked to realize that her father really didn’t know. For someone consumed with the idea of family, Cersei observes, Tywin was remarkably blind to what was happening with his own. Cersei then goes to Jaime, tells him of the encounter, and they have an intense sexual bout.

For the last few seasons, Daenerys Targaryen (Emilia Clarke) has usually been the character GAME presents when we’re about to get a blast of joy and triumph. Not in “The Children.” First Daenerys gets an elderly petitioner who was a tutor when he was a slave; life for unemployed older free people is so bad that he begs her to go back to his old master. Daenerys, troubled, says the man may enter into a contract with his erstwhile owner. Ser Barristan (Ian McElhinney) warns that this will be little better than a return to slavery.

Even worse comes shortly thereafter. A man comes to Daenerys with the charred corpse of his three-year-old daughter, killed by Daenerys’ free-flying dragon Drogon. The huge beast is nowhere to be found, but Daenerys personally lures her other (slightly smaller) two dragons into the catacombs beneath the palace, where she chains them up. The dragons clearly feel betrayed and Daenerys is heartbroken. We’re pretty devastated right along with her – she is in effect imprisoning her children for crimes they have not even committed. It’s understandable and terrible at the same time, and Clarke makes us feel the anguish of it.

Brienne (Gwendoline Christie) finally finds Arya (Maisie Williams), who is still traveling with Sandor Clegane (Rory McCann). Arya definitely doesn’t want to be “rescued” by Brienne, as Brienne really has nowhere safe to take her and appears to be working for the Lannisters (the sword Jaime gave her creates that impression). Brienne doesn’t trust the Hound, who finally says that, yes, he is looking out for Arya. Brienne won’t leave without Arya; Sandor won’t relinquish her. Brienne and Sandor get into a full-tilt, no-holds-barred fight to the death, with both sustaining terrible damage before Brienne at last pushes Sandor over a cliff.

Brienne loses sight of Arya, who finds Sandor dying at the cliff’s bottom. Sandor asks Arya to kill him; instead she takes his money and leaves him there.

Given that Arya has wanted the Hound dead for ages, yet clearly has come to view him as a companion, it’s hard to know exactly how to read this development. Arya has expressed disapproval of Sandor robbing those who’ve helped them, so maybe this is her idea of justice. Williams has such an intense, unnerving stillness that we’re starting to become more afraid of Arya than for her. Christie and McCann inhabit their unyielding characters with such conviction that seeing the two of them clash is like watching some kind of natural phenomenon, like rhinos clashing or sharks fighting one another.

Arya finds a small harbor, where the ship at anchor is sailing for Braavos. Arya produces the coin she received from Jaqen H’ghar back at the end of Season 2 and utters the words “Valor morgulis.” The captain is suddenly respectful and not only offers Arya passage, but a cabin as well. We know that Jaqen could kill anyone he targeted and change his appearance, so if Arya is heading to his home turf, she’s in for some interesting times.

Bran (Isaac Hempstead-Wright), Meera (Ellie Kendrick), Jojen (Thomas Sangster) and Hodor (Kristian Nairn) find a glowing tree in the wilds of the North, just as Jojen predicted. Before they can reach it, Walkers appear from under the ice. Bran winds up possessing Hodor in order to protect himself and the others, and even so, Jojen is fatally wounded. Meera administers a mercy-killing knife thrust to her brother, who foresaw this event. A Child of theForest, a fairylike female, brings Bran, Meera and Hodor to safety within a cave; the Walkers cannot pass the barrier at the cave entrance. Within the cave is the human embodiment of the three-eyed raven, who says that Bran will never walk again – but he will fly.

The Walkers breaking out from under the ice are completely cool and the fight is reminiscent of one of the great Ray Harryhausen sequences. Bran’s quest, however, remains so ambiguous that it’s hard to warm toward this storyline. It may yet gain traction, but we’re still waiting for it to join up in a significant way with the any of the other narrative threads.

Beyond the Wall, Jon (Kit Harington) succeeds in making his way to Mance Rayder (Ciaran Hinds) without getting killed. Mance says that he and his people for the most part just want to get south of the Wall to avoid the Walkers. Castle Black can either open the gates and let them pass peacefully through, or suffer an attack that will wipe out the Watch. Jon is thinking this over when Mance’s camp is attacked by an army on horseback. The army is led by Stannis Baratheon (Stephen Dillane), with Davos (Liam Cunningham) at his side.

Mance surrenders, but won’t bend the knee. Back at Castle Black, Jon talks to the imprisoned Wildling Tormund (Kristofer Hivju), who says that Ygritte truly loved Jon. Tormund persuades Jon to put Ygritte’s pyre north of the Wall. As the dead of the Night’s Watch are burned at Castle Black (to prevent them from rising as Walkers), Melisandre (Carice van Houten) watches Jon through the flames.

With Stannis now at Castle Black, this puts the Night’s Watch in a tough position, as they’re not supposed to take sides in the war for the throne. There’s also every possibility that this will turn into another irresistible force meets immovable object situation, as Stannis and Jon have very different ideas about how to do things.

“The Children” is one hell of an episode, a massive season finale and it seems impossible that we’re going to have to wait almost a year for the next installment of GAME OF THRONES.