©2016 HBO/Macall B. Polay
Maisie Williams in GAME OF THRONES - Season 5 - 'The House of Black and White'
Reviews

TV REVIEW: GAME OF THRONES – Season 5 – “The House of Black and White” 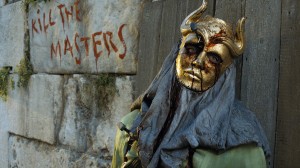 As usual, GAME OF THRONES delivers with “The House of Black and White” being no different.

Arya (Maisie Williams) travels to Braavos, but to her dismay, she is initially turned away by a strange man at the House of Black and White, where she had hoped to be trained to be a “faceless” assassin like her old ally Jaqen H’ghar (Tom Wlaschiha). However, when Arya is accosted on the street and about to take on a gang by herself, the strange man shows up, scares the youths away and transforms into Jaqen. He brings Arya back to the House of Black and White.

Brienne (Gwendoline Christie) and Podrick (Daniel Portman) by chance come across Sansa Stark (Sophie Turner) and Petyr Baelish (Aiden Gillen) in a tavern. Sansa declines Brienne’s help and Baelish wants his men to detain her. Brienne and Pod escape – allowing for some cheer-worthy derring-do on our noble swordswoman’s part – but Brienne is still loyal to her oath. She is going to protect Sansa no matter what and she certainly doesn’t trust Baelish. Brienne therefore declares that she and Podrick are going to quietly tail Sansa and Baelish.

Cersei (Lena Headey) is extremely upset when she receives a package from Dorne, containing a pendant owned by her daughter Myrcella. Cersei and her brother (also Myrcella’s father) Jaime (Nicolaj Coster-Waldau) both agree this is a threat, so Jaime determines to go to Dorne to rescue the girl. He doesn’t plan to bring an army, but instead recruits his old sparring partner and Tyrion’s old friend Bronn (Jerome Flynn) for the journey.

In Dorne, Ellaria Sand (Indira Varma), lover of the late and well-loved prince Oberyn Martell, argues in vain with Oberyn’s brother, ruling prince Doran (Alexander Siddig), to kill or mutilate Myrcella in revenge for Oberyn’s death. Ellaria says she has the support of the Sand Snakes (Oberyn’s daughters).

At the Wall, it’s time to elect a new Lord Commander. With one candidate who hates Jon Snow (Kit Harington) and another who’s a lying coward, Sam (John Bradley) nominates Jon for the position. Maester Aemon (Peter Vaughan) breaks the tie by voting for Jon.

In Meereen, Daenerys’ (Emilia Clarke) attempts to play fairly with the murderous assassins known as the Sons of the Harpy result in disaster. One of the Sons is captured, then killed in captivity before his trial by former slave and loyal Daenerys supporter Mossador (Reece Noi). Daenerys feels obliged to have Mossador executed in order to show that the law applies equally to everyone, but she succeeds in alienating most of the freed slaves. When Daenerys is alone, brooding, her missing huge dragon Drogon comes to her briefly before flying away again.

It’s a testament to how convincing the effects are, and how intimidating Drogon is, that we feel a sense of awe when Daenerys has a brief moment with her more-than-grown dragon. She experiences both dread and joy, and we share her sentiments completely. As for the political mess that is swamping Meereen, it could scarcely seem more real-world.

While it’s a good outcome to have Jon elected as the new Lord Commander of the Night’s Watch, the real delight in the scenes at the Wall is to see how much Sam is coming into his own and to watch the excellent Bradley play some substantial material.

Jaime and Bronn have the potential to be a great odd couple on the road together and it’s always swell to see Brienne winning in battle. Arya shows every sign of developing into a fierce and terrifying person on her current path, which is as it should be.

Tyrion (Peter Dinklage) and Varys (Conleth Hill) have a scene that’s probably not strictly necessary – we got the gist of it in the season opener – but since there is little on television that’s as much fun as watching these two with one another, there’s no reason to complain about it.