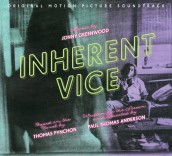 Johnny Greenwood knows what his music is smoking

For much of his filmmaking career, Paul Thomas Anderson had used composer Jon Brion to convey his provocative cinematic approach, from the insane percussive assault of PUNCH DRUNK LOVE to the frog-raining, imposing orchestral thunderstorms of MAGNOLIA. In relatively recent years, Thomas has moved onto Radiohead’s Johnny Greenwood to accompany his swings between transfixing brilliance and unbearable pretention, often within the same films. If anything, Greenwood’s music has tended to be even more innovatively insane than Brion’s, ranging between abstract modernism and hypnotic melody to capture the addled minds of kingpins, whether it was an oil baron’s very bad attitude for THERE WILL BE BLOOD or the mind-controlling intellectual guru in THE MASTER. But perhaps what’s most unexpected about Anderson’s most incomprehensibly infuriating movie yet is just how relatively normal, but no less impressive Greenwood’s work is at flashes between Wagnerian melancholy to the altered musical consciousness of 70s era scoring, all with far more coherency than the stoner private dick of INHERENT VICE.

The self-knowing gag of INHERENT VICE is just how seriously it takes a labyrinthine plot that would give Jake Gittes pause, let alone a detective who makes The Dude seem like an intellectual giant. Greenwood’s main theme plays with the idea of being witness to great revelations of human avarice in his neo-tragic orchestral melody, poking about LA’s dark corners with brooding suspense. It’s almost as if his whole scoring viewpoint is heard from a doom-obsessed gumshoe, all while avoiding the jazz vibe that spells out film noir. Instead, Greenwood goes for the soothing quality of strings and violin, both soaringly downbeat in their melody. But if much of VICE starts off like the opening of some Wagnerian opera that stalks about with Glass-ian rhythm, there’s also subtly wacked-out humor to his score as well, as a Theremin mixes with pokey electronic percussion and rock guitar feedback for a rising, feverish sense of bewilderment. More period-specific vibes arrive with the drug-filled schooner called The Golden Fang, which gets a Chinese-meets-psychedelia mysterioso vibe, while “Amethyst” is a blissed out, sideburned groove for organ and folk guitar. Yet if INHERENT VICE gets far out, it surprisingly isn’t half as confrontational as Greenwood’s other work for Anderson. This is a detective score that’s a beautifully smooth joint going down into the ears, as fit for the oldies at an opera opening as it might be stoners staring up at the ceiling as a Grateful Dead album plays – an approach that’s truly more than half as clever as Anderson seems to think his beyond-puzzling film is.

VICE‘s song choices is the one area where the soundtrack shines, especially given Anderson’s picks that range far beyond the usual 60s-70s song suspects in evoking an eccentric LA. If anything, numbers like CAN’s Velvet Undergound-ish “Vitamin C,” the R&B jazz of The Markett’s “Here Come the Ho-Dads,” Minnie Riperton’s delicate “Les Fleur,” Neil Young’s southern fried harmonica-flavored “Journey Through the Past” and the Tiki exotica of Les Baxter’s “Simba” suggest a mix tape put together by a clerk at Amoeba Records in a moment of ultra-hip, LP-bin combing euphoria. The dust that flies up definitely makes INHERENT VICE‘s album a thoroughly interesting, cool buzz high worth investigating.

Click on the link to Purchase the INHERENT VICE soundtrack