Bones Review The Putter in the Rough Season 10 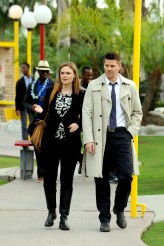 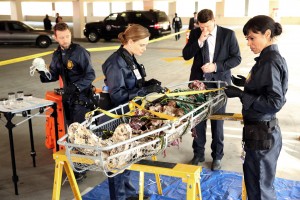 Miniature golf, that major yet largely unsung staple of suburban Americana, takes focus in the BONES Season 10 episode “The Putter in the Rough.” The title is arguably a little misleading, as there isn’t much rough on a mini and the body is found on a ledge, but the forensics and the world – and the golf course – turn out to be the most enjoyable and best thought-out parts of this installment.

The victim is a star in the highly competitive world of miniature golf. The suspects include fellow mini-golfers, the irate father of the dead man’s teenage girlfriend and the owner (Carlos Alazraqui) of a mini-golf course where a tournament is taking place.

The evidence is puzzling to our team at the Jeffersonian, as three wounds turn out to have all been inflicted by the same bullet. It seems that there is a new kind of bullet designed to fragment, with little wires that connect the bits. Fortunately for forensics, the killer left part of a fingernail in the wires. The murderer is the exceptionally dim wife (Arden Myrin) of the golf course owner, who was angry that her husband was more interested in his golfing protégé than he was in marriage.

Myrin makes the most of her perplexed perpetrator, who thinks there should be no legal difference between defending one’s life and defending one’s lifestyle. There’s also some fun to be had with the golf course, though it seems like the story could have done a little more with the whole notion of miniature golf as a cutthroat sport. Then again, perhaps there are in-jokes here that will elude non-golfers (like this reviewer).

Meanwhile, Brennan (Emily Deschanel) is upset that her ex-criminal dad Max (Ryan O’Neal) is keeping secrets from her. Brennan’s husband FBI Agent Booth (David Boreanaz) obliges his wife by putting a tracker on Max. It turns out that Max went out of town to dig up the grave of an old enemy who had blackmailed Max in the past, stealing a ring from Brennan when she was just a sleeping child to prove ability and intent. Brennan is touched once she learns the truth and gives the ring to daughter Christine (Sunnie Pelant). The back story doesn’t quite jibe with what we’ve already heard about Brennan’s past and exactly when and why Max (and Brennan’s mom) left. Furthermore, it doesn’t move the relationship between Brennan and Max forward or backward – Brennan trusts Max, then doesn’t, then trusts him again, leaving us pretty much where we were at the start of the episode.

The third story thread involves the efforts of lab assistant Wendell Bray (Michael Grant Terry) to get his girlfriend Andie’s (Shalita Grant) antique clock repaired when he believes he’s broken it. Hodgins (TJ Thyne) tries to fix the clock, but in the end buys an identical one for nine dollars and uses its insides to replace the broken mechanism. When Andie finds out, she reveals that the clock hadn’t worked in years. It seems that we’re perhaps meant to be a little more invested in the Wendell/Andie romance than we are at this point, but it’s almost always fun to see Hodgins puttering around with inventions.

“The Putter in the Rough” isn’t especially memorable, but any episode in which a tiki hut is taken to the lab for evidence purposes has its merits.