Home » Bones review The Teacher in the Books 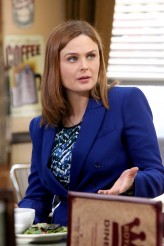 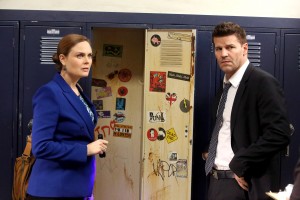 When BONES tries to send a message on a particular issue in an episode, sometimes it succeeds, sometimes it gets the point across but is woefully heavy-handed, and sometimes, as with “The Teacher in the Books,” it scrambles what it’s apparently attempting to say – on two fronts.

The main plot in “Teacher” concerns the United Teaching Fellows, a fictional organization that bears a resemblance to the real-world Teach for America, which sends new teachers to schools considered to be danger zones.

When UTF high school teacher Mia Ferrara’s remains are found in an abandoned bookstore, there are plenty of suspects to go around. There’s Mia’s philandering boyfriend, who lies about his whereabouts at the time she was killed (turns out he was with another woman), a student (Allius Barnes) who appears to have written a menacing note, the student’s protective older brother (Allen Maldonado) who has a criminal record, a school security guard and even the principal. However, the culprit turns out to be a fellow teacher who was falsifying his students’ test answers so they’d get better grades, which in turn would make him appear to be a better teacher, which would allow him to get a promotion so he wouldn’t have to teach at the school any more.

This storyline seems well-intended as well as timely, with the criminal convictions of Atlanta, Georgia teachers for tampering with tests. However, in addition to featuring some very on-the-nose dialogue, “Teacher” has the usually astute Brennan (Emily Deschanel) utter the line “Good teachers are rare,” which is not exactly the case. Furthermore, there is an argument to be made that one of the reasons that the “problem” schools served by United Teaching Fellows (or Teach for America) is that the bureaucracy tends to send away more experienced (i.e., more expensive) teachers and bring in novices at the minimum pay rate, so that the children most in need are served by those who have the least amount of practical knowledge in how to deal with on the job challenges.

The episode also lauds Mia for physically injuring herself in order to essentially blackmail the student’s brother (she’ll claim he cut her if the student doesn’t stay in school); when we hear about the incident, we tend to side with the brother’s view of her as a “crazy lady.”

The B plot deals with Brennan’s discovery of Twitter, thanks largely to lab intern Jessica Warren (Laura Spencer). Having Brennan go from initial disdain the teen-like enthusiasm is amusing, or would be if she weren’t being herded in the wrong direction. Jessica and Angela (Michaela Conlin) tell Brennan that Twitter is not for links to massive dissertations – folks, if someone is a world-famous scientist, yes, that’s exactly what it’s for. Then Brennan starts taking smiling selfies with skeletal remains, which seems as though it could invite public outrage over the cavalier display of what’s left of a real human being. This is the kind of thing it seems Brennan would normally find tasteless, not celebrate.

“The Teacher in the Books” has its moments of humor and character and it’s good to see the education of at-risk youth being given attention in entertainment programming. Still, the episode might have been better if it were a little subtler and a little more versed in educational politics – and remembered that even though what we’re seeing are props, in the show, they’re supposed to be real.