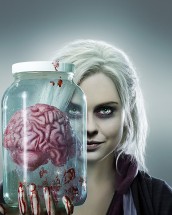 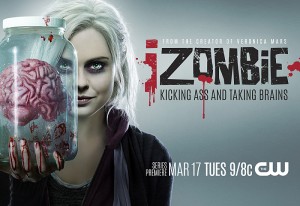 The CW’s iZOMBIE, Tuesdays at 9 PM, was developed by executive producers Rob Thomas and Diane Ruggiero from the Mike Allred/Chris Roberson comic book series. The TV version stars Rose McIver as Liv Moore, an aspiring doctor who is forced to work as a morgue assistant after a scratch from a zombie turns her into one of the undead. Liv discovers that, apart from being pale and craving brains – which her morgue job provides access to – she’s not all that dead. Even better, she gets memories and talents from the brains she eats, which allows her to help solve murders.

This last aspect is in line with VERONICA MARS, which dealt with the teen detective of the title. It ran on the CW’s predecessor the WB for four years and was also created by Thomas, who then made a theatrical sequel, as well as creating the catering comedy PARTY DOWN.

ASSIGNMENT X: Were you looking to do something with a heavy pre-existing mythology? Because prior to this, you’ve created your own mythologies, which tend toward the non-supernatural. 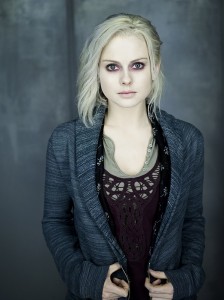 ROB THOMAS: No. In fact, very much no. Susan Rovner, the head of development at Warner Brothers, made me do this show. I’d already sold a couple pilots, I was in the editing room on the VERONICA MARS movie, I told her, “I can’t, I don’t have the time,” and she sent me the comic book. “CW needs a great female lead show, I want you to do this.” And I kept trying to say no and she wouldn’t let me. I finally said yes to it because Susan Rovner, who’s one of my favorite people in the business and one of the smartest, told me I had to. I asked if I could have Diane [Ruggiero] help me with it so I could actually get it turned in on time, and that’s how it happened. It really sold itself on the [comic book] cover – it was Susan Rovner sending me this insane “That should be the lead of a CW show.”