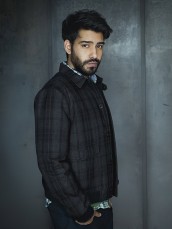 The actor talks morgues and why his character is so enthusiastic 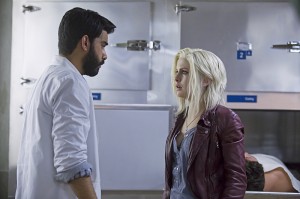 In The CW’s iZOMBIE, now in its first season Tuesdays at 9 PM and renewed for a second, Rose McIver stars as morgue assistant Liv Moore. Liv is a zombie, though she has managed to conceal this fact from most people.

However, Liv’s secret is known to her boss, Dr. Ravi Chakrabarti, played by Rahul Kohli. Far from being afraid of his coworker, Ravi is thrilled to have a chance to study the zombie phenomenon up close. He thinks it’s great that when Liv eats the brains of murder victims after they arrive at the morgue, she gets their memories, which frequently helps in solving the crimes (the police think she’s a living psychic).

ASSIGNMENT X: Were you a VERONICA MARS fan before all of this?

RAHUL KOHLI: No, I hadn’t seen VERONICA MARS. I was very aware of it and I knew who Rob Thomas was, especially because just before I auditioned, I knew about his Kickstarter [campaign to get a VERONICA MARS movie made] and the success of the Kickstarter. And as soon as he became my boss, I watched the show and I really enjoyed it.

AX: And were you a horror fan before becoming involved in iZOMBIE?

KOHLI: I’m a film fan. I don’t necessarily gravitate towards horror, but I’ve seen the George Romero [zombie] films, I’ve seen the Danny Boyle ones and so I was in the comfort zone to a certain degree, and I’m a big WALKING DEAD fan, so it was nice to work with zombies.

AX: Did you do any research in order to play a forensic pathologist?

KOHLI: Yes, I did. Initially, when I auditioned for the pilot, I’d done a few bits and bobs, because that kind of career does speak to someone’s personality. It says a lot about what an individual is like. And then once we started working on the pilot properly, I would watch autopsy videos, real stuff, watch instructional videos about human anatomy, famous medical pathologists and how they solved cases using autopsies, and then when we got to Canada, I actually went to the morgue here and saw some really bodies and had a walkaround.

AX: It’s been said that the smell of an actual morgue is kind of horrific.

AX: Would you say that the real-life morgue or the iZOMBIE morgue set is more gross?

KOHLI: I think the pretend morgue is. The actual morgue is incredibly sterile, it’s got lovely posters everywhere of motivational workplace things, because it’s obviously a very sad place, and the staff there do their best to keep things either festive, they have Christmas decorations, they try and keep it light. We keep it cold and moody and a TV world sort of look.

AX: Your character Ravi is very upbeat and enthusiastic. Is that something you have to work at or does that come naturally?

KOHLI: No. No, I’m incredibly low-energy and I don’t tend to smile a lot or be very enthusiastic about a lot of things. I’m quite a low-energy English boy [laughs]. As soon as we had the pilot – I think the reason he became so [enthusiastic] was because it was me maybe overcompensating, I mean, thinking, “Oh, my God, how do I play enthusiastic? I’m Scotty from STAR TREK, what do I do?” And that’s where that kind of energy came from. And it’s fun – it’s fun because obviously it’s a good contrast to Liv’s energy, especially in the pilot, where she’s a little bit more [indifferent tone] “Hmm …” And having someone constantly around her, rattling her up, makes for a nice contrast.

AX: At the beginning, Ravi is pretty gung-ho about studying any and all zombies. Does he ever become a little more zombie-savvy and go, “Perhaps I should be careful, since this thing could take my head off”?

KOHLI: He does. And that was definitely something that I wanted to show. You’ve seen [Episode] 103, where he comes unstuck. And for me, it was like those guys who go on safaris, and they’re obsessed with studying animals, dangerous predators, and they turn on [the safari people] and you realize just the sheer power of what you’re dealing with and you never fully understand it until it’s backed you into a corner. And he definitely learns from that and there’s definitely a trepidation and a bit more respect for it in the following episodes.

AX: Do you and Rose McIver work on the friendship/work relationship between your characters, Ravi and Liv?

KOHLI: It’s a complete fluke. She’s an incredible actress, she elevates anyone who’s around her, but me and Rose, we’re very fortunate. We met, we hit it off and we’re like brother and sister, we’re fighting on the set, we’re mucking around and having fun, and it shows in the dynamic between the two characters. We knew that they would be friends, but I like to think that something happened organically outside of that that makes Liv and the doctor quite chummy. Maybe it’s [McIver] being a Kiwi [New Zealander] and [Kohli] a Brit and we have a similar style of humor and sensibilities or whatever, but yeah, it was something organic in my opinion.

AX: And is there anything you’d like to say about iZOMBIE right now?

KOHLI: Yeah. I’m super-excited for everyone to see it. I really believe it’s the kind of show that can reach a broad audience and there’s something in there for everyone.

This interview was conducted at The CW’s session for the Television Critics Association at Pasadena’s Langham-Huntington Hotel.