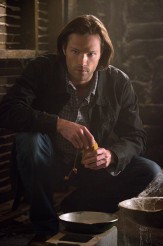 Better than usual grappling with emotions and consequences 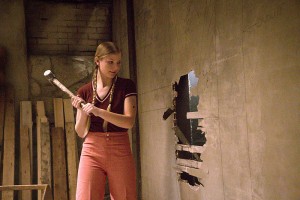 SUPERNATURAL’s “The Werther Project” uses a magically-protected object to demonstrate that when it comes to blame and guilt, nobody can deliver it like one’s inner being. There’s even a good fake-out here, along with much better reason than usual for Sam (Jared Padalecki) and Dean (Jensen Ackles) to grapple with responsibility and angst.

In 1973, annoyed teen Suzie is moved to knock out a flimsy bit of wall in the family basement, uncovering a strange box that emits a green gas. Next thing Suzie knows, her father, mother and brother have all committed suicide.

In the present, Sam makes a deal with witch Rowena (Ruth Connell) that she’ll remove the curse of the Mark of Cain from Dean if Sam will kill Rowena’s son, King of Hell Crowley (who doesn’t appear in this episode). Sam has no problem with this. Rowena, however, needs a codex to help her translate the spell. The codex was taken by the Men of Letters. We see in flashback a run-in between the more conventional Men of Letters and crazy, temperamental Magnus (Kavan Smith), who hid the codex in the booby-trapped box, aka the Werther Project, in what became the home of Suzie’s family.

Sam finds Dean over-enthusiastically slaughtering a nest of vampires and lies about where he’s going. When Sam gets to the house, Dean tracks him there. Suzie (Brenda Bakke) is now middle-aged and understandably reluctant to let them in. Sam doesn’t tell Dean exactly what he wants with the box, but when he tries to get at it, the green mist comes out. Suzie commits suicide. Then Suzie’s ghost appears to Sam and begins haranguing him about all the people who get killed as collateral damage whenever he’s trying to save Dean. The ghost is about to kill Sam, who is saved by the timely appearance of Rowena.

Meanwhile, Dean finds himself back in Purgatory with his old vampire buddy Benny (Ty Olsson). Initially friendly, Benny begins telling Dean that, deep down, Dean knows the Mark will just make him get worse and worse, and that no matter what he makes them promise, Sam and Castiel will never be able to put him down. Even if they do, trying to live with that action would destroy them.

Sam and Rowena can’t get the box open. Rowena says that the only thing that will open it is the blood of a Man of Letters. Sam cuts himself and begins bleeding on the box.

In Purgatory, Dean realizes the real Benny would never tell him to commit suicide. He kills what turns out to be a phantom of Benny and is returned to the house. Rowena isn’t really there – it’s the green mist pretending to be Rowena so that it/she could trick Sam into killing himself by bleeding himself to death on the box. Dean nudges Sam out of the way, bleeds on the box himself, defuses the green mist and gets it open. Sam gives the real Rowena the codex.

The psychology has stepped up in “The Werther Project.” Yes, Sam and Dean are dealing with issues they’ve dealt with before, but at least this time they’re phrased in new enough ways that we feel like they’re considering new ramifications.

Additionally, the fake Rowena works well enough that we don’t wonder why Sam is taken in by it/her. It makes sense that Rowena would show up and she doesn’t do anything to immediately create suspicion, like urging Sam to commit suicide. Plenty of spells require blood, so Sam doesn’t question it, and by the time it’s clear he’s in danger, he’s pretty far gone.

It also helps that Connell has toned down her portrayal of Rowena a bit. She’s still arch, but she now feels a little more part of the SUPERNATURAL-verse, eccentric but no longer outsized. Olsson’s Benny is always welcome, real or not, and going over the pros and  cons of continued existence gives Padalecki and Ackles some solid material to perform.

“The Werther Project” is a worthy SUPERNATURAL segment.