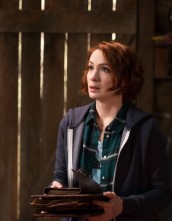 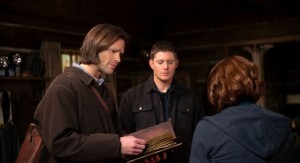 Jared Padalecki as Sam, Jensen Ackles as Dean and Felicia Day as Charlie in SUPERNATURAL "Book of the Damned" | © 2015 Diyah Pera/The CW

It’s been said of SUPERNATURAL – often by fans, sometimes by cast members – that if the Winchester brothers ever permanently learned anything, the show would come to a halt. Based on the events of the Season 10 episode “Book of the Damned,” SUPERNATURAL is in no danger, with Sam (Jared Padalecki) doing several things in an attempt to save Dean (Jensen Ackles) that are so bone-headed that we fear for his survival, which is the point. On another front, Castiel (Misha Collins) likewise hasn’t seemed to absorb the considerable evidence that Metatron (Curtis Armstrong) can’t be trusted, but gets a righteous outcome anyway.

Charlie (Felicia Day), searching for something that can get the Mark of Cain off of Dean’s arm, has gotten hold of the legendary Book of the Damned, which has information to create of remove any curse. She’s also being pursued by some backwoods goons, one of whom shoots her. Charlie calls the boys to help her find a safe hiding place where they can all study the book together.

The goons chasing the Book turn out to be scions of the Styne family, who have been using its curses for centuries to create wealth and power and, from all evidence, turn themselves into evil creeps. When several Stynes assault the rundown cabin where our heroes have taken shelter, leader Jacob Styne (Jeff Branson) warns that using the Book to remove the Mark of Cain will be worse for Dean – and everyone else – than Dean continuing to bear the Mark. It then appears that Jacob is chiding Sam for throwing the Book into the fire, before Jacob is killed (since he’s trying to kill everybody else, this is an understandable development).

Meanwhile, Metatron tells Castiel that Cass’ stolen grace is hidden in an abandoned library. Metatron enacts a spell here that weakens Castiel and enables Metatron to steal a hidden demon tablet. Really, Castiel should have known better than to give Metatron an inch of freedom. However, turns out the deceitful scribe was telling the truth about the grace being on the premises – Castiel finds it, takes it and, in a lovely wing-unfurling moment, is once again a full angel. It’s extraordinarily satisfying. Metatron takes the demon tablet and runs.

Castiel then goes to the Men of Letters headquarters. Charlie is delighted to finally meet the angel, especially when he heals her carpal tunnel – and her bullet wound. Castiel says that he thinks Sam did the right thing by destroying the book. This is when we see, in flashback, that Jacob was actually chiding Sam for pretending to destroy the Book and secretly keeping it. Sam then summons Rowena (Ruth Connell), who agrees to help him find the spell to lift Dean’s curse – for a price, of course.

This of course brings us back to the fact that Sam appears to have learned nothing – about heeding warnings, about dealing with demons, or even about Crowley, who would probably be a good bet for figuring out how to use the book without added harm to Dean.

There are some good scenes here. Although it’s not new turf, Padalecki makes the heartfelt most of Sam telling Charlie that he can only bear his life if he’s with his brother. Armstrong is just great as newly-human Metatron exults in the joys of diner food. Day knows exactly what to do with Charlie’s wincing description of the Book’s gruesome origins.

Having Sam be the one to do something sneaky and bull-headed is a nice change and overall, “Book of the Damned” is both fun and suspenseful. Also, it’s hard to argue with an episode where an angel gets his wings.