bones review the baker in the bits 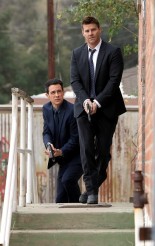 A case more complex than the episode can accommodate 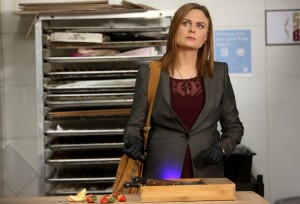 It’s usually good when a BONES episode has a worthy mystery, but “The Baker in the Bits” metaphorically bites off more than it can chew. Trying to juggle storylines about a bakery that employs and helps rehabilitate ex-convicts and stress between Cam (Tamara Taylor) and her boyfriend Arastoo (Pej Vahdat), there winds up being too little time for an exploration of what’s behind a fairly strange serial-killing spree. This is an occasion where some insight from the late Dr. Sweets would have been invaluable.

We see the “how” of the death at the start of “Baker,” as a man tries to escape pursuit by – unfortunately – running right onto a site where a detonation is taking place. The deceased is identified as a former felon trying to go straight with a job at a bakery. Suspects are thick on the ground, as it turns out the victim was cheating on his girlfriend, using drugs and planning to participate in a robbery. The assailant (not actually the killer, as the explosion was the cause of death) turns out to be one of the dead man’s workmates, who has been murdering fellow former prisoners and skinning off and saving their prison tattoos as souvenirs.

In other news, Jeffersonian intern Arastoo receives word that his brother, back in Iran, is dying of cancer. Arastoo decides to return to the country of his birth, despite the fact that his parents are exiled and the only reason he’s not legally forbidden to be there himself is that he left before the revolution. Arastoo doesn’t consult Cam on his decision, and she is hurt and angry that her more-or-less fiancé doesn’t want to include her in this life or death choice. Cam is also terrified that Arastoo will get himself arrested or killed while in Iran. Eventually, the two reconcile, with Cam understanding and giving her blessing to Arastoo’s need to be there for his sibling.

This is a perfectly decent piece of drama with relatively novel dilemma for one of the main characters. The bakery is also a nice setting, bringing up the subject of rehabilitation in a fairly natural manner that unfolds easily without lecturing.

Even so, a serial killer who takes skin trophies from his peers but trusts his warm-hearted boss begs a good deal more explanation than we get here. It’s not that the subject matter doesn’t fit BONES (though it seems like something we’d more likely encounter on CRIMINAL MINDS or HANNIBAL), or that the whole episode should be devoted to it, but it would seem to merit at least a scene’s worth of discussion.

Otherwise, “The Baker in the Bits” is decent – it just doesn’t rise to the full potential of its ingredients.