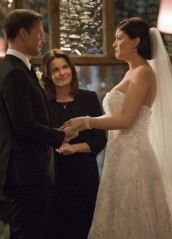 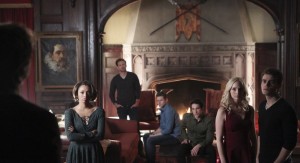 There’s never a dull moment on The CW’s THE VAMPIRE DIARIES, now in its sixth season Thursdays at 8 PM and renewed for a seventh. Between all the vampires, werewolves, witches, hybrids, ghosts, romances, deaths, resurrections, spells and more in and around the town of Mystic Falls, Virginia – not to mention events on the series’ spin-off THE ORIGINALS, which provides the occasional crossover – each episode is filled to the brim with events.

Caroline Dries serves as executive producer and co-show runner on THE VAMPIRE DIARIES, which was originally adapted for television by Kevin Williamson from L.J. Smith’s novels; Dries’ counterpart on THE ORIGINALS is Michael Narducci, with Julie Plec overseeing both series.

Dries (rhymes with “trees”) previously worked on MELROSE PLACE and SMALLVILLE. She’s been asked a lot lately about the departure of VAMPIRE DIARIES star Nina Dobrev, who plays heroine Elena Gilbert and her scheming doppelganger Katherine, at the end of this season. This interview with Dries is about other aspects of the show.

AX: When you’re concerned that a plotline you’re planning for VAMPIRE DIARIES might be a little similar to something happening over on THE ORIGINALS, does that always go through Julie Plec, or do you talk with Michael Narducci, or how does that work?

CAROLINE DRIES: Well, the way our office is situated, we share a kitchen, so I see Mike five times a day. So it’s sort of like you kind of get wisps of what they’re doing [on THE ORIGINALS], so it never feels like a death experience, where your idea isn’t taken because they’re using it, but usually, I’ll pitch something to Julie and she’s like, “Don’t phrase it like that, phrase it like this, because we’re doing something very similar over here. Let’s just not use the same magic.” Stuff like that.

AX: Do you feel the shows have different tones, and if so, what is the tone of VAMPIRE DIARIES?

DRIES: I definitely think they have different tones. VAMPIRE DIARIES is self-aware. It takes itself seriously, but the characters are fun and joke a lot and there’s a levity to the show that has more of a teen voice, whereas THE ORIGINALS I think has more gravitas and feels like a more epic, gothic show.

AX: Would you say the difference is maybe that the characters on VAMPIRE DIARIES have seen BUFFY?

DRIES: [laughs] Yeah, you could say that. They [THE ORIGINALS] have Elijah [played by Daniel Gillies] and it’s really the accents that put them over the edge. They just are a little bit more serious. That’s why when Elijah cracks a joke, it’s that much funnier.

AX: To ask a nitpicky question, the personality of Caroline, played by Candice Accola, did not change a great deal when she became a vampire. However, Elena for awhile became a conscienceless killing machine when she turned. Why was that? Because we’ve seen that that’s not a necessary component of turning into a vampire. Caroline turned her humanity off this season and was a stone-cold killer for awhile, but that wasn’t what she was like when she initially turned.

DRIES: Well, vampirism brings out your main qualities, and Caroline being a control freak, was like, “You know what? I’m a vampire? I’m going to be the best vampire.” And so she kind of is our best vampire. She has her sh*t together. Elena has been through a lot and I think she’s just getting a little bit more numb so she probably hasn’t put up with it as much. She has a lot going on. Because we wanted to show, don’t forget, being a vampire is a curse. There are consequences. She wanted to be human. She never wanted to be a vampire. So we wanted to show that this is a bad thing that’s happened to her.

AX: How do you feel about the online following and reaction to THE VAMPIRE DIARIES?

DRIES: I take such pride in the episodes – the dialogue, the plot, everything about it – that when fans respond or they’ll quote a line or something – I don’t know if it’s egotistical or what, but as an artist, you crave feedback. So yeah, of course I’m going to read it. Does it hurt my feelings sometimes? Yes, people are so mean – they want me to die, they want me to kill myself.

DRIES: I would say one out of a hundred people say it [negative things]. I actually usually just block them, because I personally will try to never say a negative movie review or something like that, just trying to eliminate negativity from Twitter. At least, that’s my contribution.

AX: Is there any new mythology that you’ve been lobbying for?

DRIES: New mythology? No. This Gemini Coven thing is, in my opinion as a storyteller, a really great storyline in that it’s been able to go over twenty-two episodes and we’re getting a lot of story out of it without bogging down the audience with confusing mythology, which is what we tend to do around [the middle of a season] – people are just, “I have no idea what you’re talking about.” So this is actually a very clean, over-arching mythology.

AX: Over on THE ORIGINALS, vampire/werewolf hybrid Klaus, played by Joseph Morgan, has managed to have a baby with a werewolf. Granted, Klaus is a hybrid, but does his fertility make any of your vampires now worried about birth control or they even paying attention to what’s going on with Klaus?

DRIES: [laughs] Nobody’s mentioned Klaus’ baby on VAMPIRE DIARIES, so I guess they weren’t invited to the shower, but because I think the [DIARIES] characters are a little bit younger, too, I think their biggest life issues are going to college and having a boyfriend. We’ll ultimately talk about what it means to have a family as a vampire, but nobody’s said, “They did it, how do we do it?” Nobody’s talked about it.

AX: Is there anything else you’d like us to know about THE VAMPIRE DIARIES right now?

DRIES: Caroline’s mom [died]. That storyline is one of our main thrusts for the rest of the season, both in how Caroline is going to cope with that and take charge. So I’m excited for fans to watch that play out.

This interview was conducted at The CW’s presentation day for the Television Critics Association at Pasadena’s Langham-Huntington Hotel.