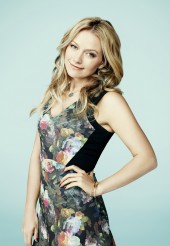 The actress talks about her character on the Fox comedy 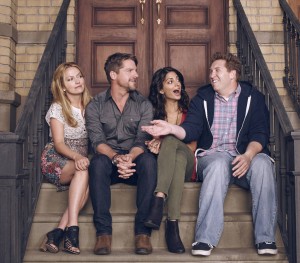 In Fox Network’s half-hour comedy WEIRD LONERS, Tuesdays at 8:30 PM, Becki Newton plays Caryn Goldfarb. In the pilot, Caryn has the option of marrying a staid, steadily employed father of two, but she’d much rather fall in love and in bed – and be heartbroken – again and again and again with new acquaitances. Caryn befriends iconoclastic artist Zara Sandhu (Meera Rohit Kumbhani) and gets to know her neighbors, innocent Eric Lewandoski (Nate Torrence) and his brash cousin Stosh (Zachary Knighton).

Newton, originally from Connecticut, played receptionist Amanda Tanen on UGLY BETTY. Other credits include AUGUST RUSH, HOW I MET YOUR MOTHER, THE GOODWIN GAMES and LOVE BITES. In conversation, Newton is far clearer on what she looks for in a character than in what Caryn looks for in a guy.

AX: When you read the WEIRD LONERS pilot, did you think, “How do I reconcile the fact that Caryn is at once into sex as something that feels good in of itself and seeking true love?” Does she see that as a contradiction, or does she see good sex as a prelude to true love?

BECKI NEWTON: I think that Caryn will take any inkling of any sort of connection and call it true love. So if it means sleeping with a guy on the first date, she believes that’s a deep connection. She will take anything. She’s a very needy person who will cling on to any glimmer of hope.

AX: But on the other hand, she rejects stability while continuing to seek true love.

AX: And is your process in approaching any character, but especially Caryn, “How do I relate this to myself,” or do you think, “Now, if I was this sort of person, what would I be like?”

NEWTON: I think in choosing projects, I try to see where the overlap is, so that I can relate somehow to make it real. When I read this script, I thought, “Okay, Caryn Goldfarb, weird loner. Becki Newton, married mother of two.” Those seemed really far apart. But when I thought about Caryn’s optimism, her neediness, her tendency to get really excited, I have so much of that in me, and sort of misguided optimism at times. I just as easily could have moved out to L.A. for pilot season and never ended up on TV, but I thought, “It’s a great idea. I’ll just go to L.A. and things will work out.” It has led me to good places, but probably at times been idiotic. So I think that all or nothing quality that Caryn has I have, and I found really endearing. I think what’s important for me when I’m looking at a project is to find a character endearing, even if it seems like a despicable person. Caryn’s not, but Amanda in UGLY BETTY, pretty terrible, Caryn, a little messy, so I like to find characters who are flawed, but still be very fond of them. I think if I’m fond of them in spite of their actions, then they can be a little bit more relatable to audiences.

AX: When you were in New York, before you came out to L.A., were you doing stage?

NEWTON: No, I was doing commercials. I was a hostess at the Olive Garden and loved every second of it.

AX: Do you find that your performance dynamic is different between group scenes and one-on-one scenes?

NEWTON: I think what’s great about this show is that the characters are so different and their relationships are so unique. So Caryn with [Stosh]– this is a guy that’s putting the moves on her, she thinks he’s a jerk and he brings out the bitch in her. She’s like, “I don’t like you, you’re disgusting.” And then she’ll be in another scene with Nate’s character Eric, who’s like this big teddy bear, and she wants to guide him and she looks at herself as this mama bear to him. What I love about this show is, the characters are so different that they really do bring out such different sides of each character. I think it helps us get to know these characters a lot quicker than if we only saw them in one context, and it’s pretty great. The fact that they don’t have a back story [involving one another] is great. They’re strangers. So how they interact with each other is pretty telling. I know I’m not the same at work as I am at home, and I’m different with my husband [actor Chris Diamantopoulos] than I am with my friends. I think it’s a great way to layer characters.

AX: How would you describe the relationship between Caryn and Zara?

NEWTON: I think they’re fascinated by each other. I think Caryn looks at Zara and thinks, “How are you so cool? How do you not care what people think of you?” And I’m sure, conversely, Zara can’t believe how optimistic Caryn is. “After all of the evidence to the contrary, how are you so hopeful about love?” And I think they can learn a lot from each other.

AX: So both women are happy that the other is that interested in how they process their experiences?

AX: Do you as an actress have a different way you approach working with each of the other three leads?

NEWTON: No, I think it’s all very natural. I think we bring out different things in each other. It’s all on the page, so I think we are starting with great writing, and we play from there. It was a very easy way to shoot. It didn’t feel like we were working really hard. It felt like we were actually having a great time and relaxing into the words.

AX: And what would you most like people to know about WEIRD LONERS?

NEWTON: That if you watch it, you’ll be hooked.

TCA News: BONES creator says it will likely return for Season 8
Movie Review: THE DARK KNIGHT RISES
GOTHAM: Cory Michael Smith on the enigma of being the Riddler- Exclusi...
Movie Review: NIGHT AT THE EAGLE INN