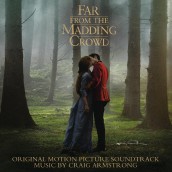 The beautiful, slow-moving string melodies of English composer Craig Armstrong have made him a favorite when it comes to the many shades of romance. And while he’s had his share of cheerful, kiss-filled endings with LOVE, ACTUALLY and FEVER PITCH, most often it’s his poignant talent for melody that has ripped romance asunder, most often in the company of Baz Luhrmann for MOULIN ROUGE! and THE GREAT GATSBY, Armstrong’s beautiful melancholy couldn’t be better suited than for this latest cinematic trip to Thomas Hardy’s countryside with FAR FROM THE MADDING CROWD, the story of a woman torn asunder between an earthy sheep farmer, dashing soldier and stuck-up land owner.

It’s a tale as old as the green rolling hills, made most famous by the 1967 love triangle between Julie Christie, Terence Stamp and Peter Finch in John Schlesinger’s excellent adaptation, which featured sumptuous Oscar nominated score by Richard Rodney Bennett – arguably one of the finest written for the cinema. While Armstrong doesn’t quite have the musical showcase of Stamp showing off his cavalry skills here, he does quite well in making his own imprint on the tale. Just as that composer took inspiration from the master of bucolic English music William Walton, Armstrong is mesmerizingly at home in nature with a score that features violin and harp amidst his strings, creating a lush, yet subtle paean to both nature and a woman’s conflicted heart. The classical effect is nothing less than gorgeous in a well-trod land of costume drama scores, quietly singing with its own poetic presence as it delicately sets the stage for tragedy.

Victorian-era tunes also prove to be an essential part of the CROWD, from the church hymns of The Dorset Singers and Yeovil Chamber choir to the energetic folk dances, performed with joyous energy for fiddle and accordion by the Eliza Carthy Band and Saul Rose. But when it comes to enchantment starlet Cary Mulligan provides a poignant warning about menfolk with “Let No Man Steal Your Thyme” – nor would they dare to from her.