A stunning amount of action, along with some good character moments 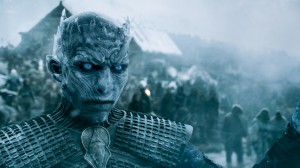 “Hardhome” goes a long way toward explaining why there was relatively little action in the past few GAME OF THRONES episodes – they were saving it for this one. “Hardhome” reinforces the cataclysmic threat of the White Walkers in epic terms, with the kind of gigantic battle sequences associated with huge-budget film releases rather than television, even HBO.

The climax of “Hardhome” encompasses roughly a third of the episode. Night’s Watch Lord Commander Jon Snow (Kit Harington) and Wildling clan leader Tormund Giantsbane (Kristofer Hivju) sail into the freezing harbor of the Wildling stronghold Hardhome. There they make their case with the clan leaders that the Wildlings should come south and help the Night’s Watch fight the White Walkers. Some of the Wildlings, such as Karsi (Brigitte Hjort Sorensen), accept. Others, like the leader of the cannibalistic Thenns, refuse.

While Jon and Karsi are trying to pack those Wildlings who are willing into the longboats, White Walkers attack the fort and absolute havoc ensues. Jon finds that his Valyrian steel sword can kill a Walker just as effectively as dragon glass, but he’s only got the one sword. There is snow, blood and horror everywhere. Karsi fights valiantly and gets her two daughters safely onto a boat, but she is confronted by a group of child Walkers, who converge on her. Jon is wounded, but he and Tormund manage to make it onto the boats – it has been pointed out to the Lord Commander that if he’s not there to make it happen, the Night’s Watch may not accept the Wildlings, no matter how much the alliance is needed.

The sequence is as sustained, ferocious, dangerous and kinetic as it can be. Walkers jump over the walls, squirm under them and generally behave like monsters out of a grisly nightmare, while there’s as much slashing, bashing and creative self-defense as possible. A standout is Ian Whyte as the local giant, whose preferred method of fighting Walkers is stomping them with his gargantuan feet.

Another highlight of a different sort is the scene where Daenerys (Emilia Clarke) and Tyrion (Peter Dinklage) converse over a glass of wine. Daenerys could have Tyrion killed, she could send him away, or she could take him on as an advisor. No prizes for guessing which of these she decides to do. The first advice she wants from Tyrion is what to do about Ser Jorah (Iain Glen). Tyrion notes that Jorah is devoted to Daenerys, and that people who kill those who are devoted to them don’t inspire much devotion. On the other hand, Jorah did not trust Daenerys with the truth about himself, which means that he cannot be at her side. Daenerys orders Jorah to be taken out of the city. Jorah promptly returns to the slaver who had him and requests to be taken back as a fighter so that he can battle before the queen in the Great Pit.

Poor Jorah. The man is slowly dying of greyscale in any event, as we are reminded, but is he trying to spread the disease in Meereen or simply show his aforementioned devotion to Daenerys?

It’s delicious to see Dinklage and Clarke play off one another. It’s also heartening to hear that Tyrion trusts Varys, as for one thing, this gives us hope the character and actor Conleth Hill will reappear before long. It’s also intriguing to hear that Daenerys’ ambition is to “smash the wheel” that keeps pitting all of the major families in Westeros against one another for the Iron Throne, though it’s unclear how she plans to accomplish this.

Back at the Wall, Jon’s young servant Olly (Brenock O’Connor) voices his doubts about the Wildling alliance to Sam (John Bradley), who tries to reassure the boy. The reassurance doesn’t seem to take hold.

At Winterfell, Sansa (Sophie Turner) is furious with Theon (Alfie Allen) for betraying her escape plans to Ramsay (Iwan Rheon). Theon swears he did it to protect Sansa, since there is no escape. Sansa asks what Ramsay did to “Reek,” “Reek” tells her and Sansa says if she had the ability, she’d do it all over again herself. We sympathize completely. As Sansa continues to berate Theon for all of his betrayals, he lets slip that the two boys he killed were actually not Sansa’s younger brothers Bran and Rickon. Sansa is astonished and delighted to hear they may still be alive.

Roose Bolton (Michael McElhatton) wants to simply let Stannis Baratheon’s forces starve and freeze before the gates, but the impatient Ramsay says he can accomplish everything by confronting Stannis with twenty good men. In another character, this would seem brave. In Ramsay, it just seems creepy, though he probably can pull off whatever psychotic maneuver he’s planning.

In King’s Landing, Cersei (Lena Headey) absolutely will not confess to the Faith, even though this means she’s stuck sobbing in a prison cell, trying to drink spilled water off the floor. When Qyburn (Anton Lesser) brings news of King Tommen, it’s not good – the young ruler, without his mother and his wife, has locked himself in his room, refusing food and counsel. Headey throws herself fearlessly into every aspect of Cersei; she’s absolutely committed to being cruel, desperate, anguished and whatever else the complex character demands. We may deplore what Cersei does, but we never doubt her depths or her existence.

In Braavos, Arya (Maisie Williams) still has her own face, but she’s still almost unrecognizable as “Lana,” a clam seller sent to observe on the docks. When she reports back on what she’s seen, Ja’qen (Tom Wlashchiha) tells her in his roundabout way to poison a gambler who bets on captains losing their ships – if the men survive the sea, they lose the bet and have no money to feed their families. After Arya leaves, the Waif (Faye Marsay) says she doesn’t think Arya is ready. Ja’qen tells her it’s all one to the Many-Faced God whom they serve. Williams pulls off the disguise well, although Arya’s toughness is likely to shine through any persona she adopts. Despite all of his rough teaching methods – he hits Arya whenever she answers wrong or with a lie (even an unconscious one) – Ja’qen is starting to shape up as a provisionally likable character. He certainly has a good sense of balance and has raised the “What, me worry?” attitude to the level of a moral philosophy.

“Hardhome” has swell dramatic scenes, but its action climax is what sears its way into the memory.