Game of Thrones review Season 5 The Dance of the Dragons

TV Review: GAME OF THRONES – Season 5 – “The Dance of Dragons”

An episode of horror, grief and triumph 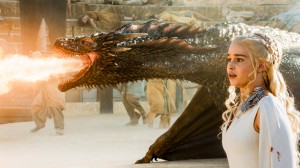 It’s a rare episode of anything that can make you soul-sick with grief and disgust and then make you soar with triumph, if for no other reason that, once plunged into that kind of total gloom, it’s difficult to rise again in under sixty minutes. “The Dance of Dragons” on GAME OF THRONES will accomplish these feats for many viewers, though some may be so wretched that even the glorious final sequence won’t provide joy enough to dispel the misery.

At the Wall, the Night’s Watch unenthusiastically lets the Wildlings, including the giant, pass through the gates.

Oh, Stannis Baratheon (Stephen Dillane). We should have paid less attention to your attention to fairness and the law and more to your willingness to employ dirty tricks against your late brother Renly in your quest for the throne.  Yes, you have the loyalty of the wise, genuinely honorable Davos Seaworth (Liam Cunningham), but you also put your faith in the pyrotheistic sorceress Melisandre (Carice Van Houten) with increasingly disastrous results, and you finally cross the line into being such an unforgivable figure that you deserve to get beaten by the Boltons, a family that normally never merits a win.

In the previous episode, “Hardhome,” Ramsay Bolton had requested that his father give him twenty good men. As “The Dance of Dragons” begins, we find out what Ramsay and his men have done – they’ve set fire to Stannis’ war camp, producing a massive loss of horses and supplies. Stannis sends Davos to Castle Black to ask for more horses, supplies and men. Davos protests that this mission could just as easily be accomplished by a boy carrying a scroll. Stannis counters that a messenger boy wouldn’t know what to do if the Night’s Watch refuses aid. This makes sense, but we see later that it’s really a ploy to get Davos out of the way.

Before leaving, Davos drops in on the young Princess Shireen (Kerry Ingram), who is reading a history book called THE DANCE OF DRAGONS (hence the episode’s title). It’s about a war that pit Targaryen against Targaryen, dragon against dragon. Davos gives Shireen a carved toy stag as a present.

Then Stannis goes to see his daughter Shireen. He asks her which side she’d pick in the war she’s reading about. Shireen says neither – it’s choosing sides that causes all the destruction. Stannis admits to Shireen that he’s worried and Shireen says she wants to help. After all Melisandre’s talk about Stannis needing to make a sacrifice of royal blood to that the Lord of Light will grant him victory, the guards take Shireen to Melisandre, who burns the pleading, screaming child Shireen at the stake while Stannis turns away. Shireen’s mother Selyse (Tara Fitzgerald) at first tries to believe this is a good thing, but then breaks down and tries to go to her daughter. The soldiers prevent her.

And here we thought there was nobody we wanted to see lose to the Boltons. Stannis has been an ambiguous figure from his Season 2 introduction, alternately seeming stern, humorless, principled and canny, but there wouldn’t seem to be any redemption from this. He’s like Shakespeare’s Macbeth, only he’s committed pretty much the worst crime possible – brutally killing his trusting only child for a perceived military advantage.

So what could possibly brighten anyone’s mood after this? For some viewers, the answer will be nothing, but for those sufficiently invested in other storylines, there’s some good news in Dorne, good news for Arya (Maisie Williams) and certain death turned to victory in Meereen.

In Dorne, ruler Doran Martell (Alexander Siddig) pardons Jaime (Nicolaj Coster-Waldau) for trying to take his “niece” (actually daughter) Myrcella (Nell Tiger Free) back to King’s Landing. It is agreed that Myrcella and her intended, Dorne’s Crown Prince Trystane (Toby Sebastian), will both go to King’s Landing, where Trystane will serve on King Tommen’s Small Council. Bronn (Jerome Flynn) is pardoned as well, though he gets a hard punch in the mouth from palace guard captain Areo Hotah (DeObia Oparei). Doran tells Ellaria Sand (Indira Varma) that she must give up her rebellion and her plans for vengeance against the Lannisters, specifically Myrcella. Ellaria must declare loyalty to Doran or die. Ellaria, weeping, kisses the royal ring. There’s some nice banter in these sequences, which seem to exist partly to move this portion of the action forward, but mostly seem to be here to add some tonal levity.

In Braavos, Arya is ready to poison the thin gambler as Ja’qen (Tom Wlaschiha) has dictated. However, she is completely distracted by seeing Ser Meryn Trant (Ian Beattie), who’s here with Mace Tyrell (Roger Ashton-Griffiths), doing business with the Bank of Braavos on the Crown’s behalf. Trant murdered Arya’s fencing teacher and was part of the killing of Arya’s father, Ned Stark. He’s topped the enemies list Arya has murmured to herself every night. She follows Trant to a brothel, where he requests a very young girl.

Williams makes Arya’s determination a quality that literally inspires awe – we sit back and are amazed that such a young woman can project that much capable ferocity. We knew Trant was scum; having him be a pedophile seems to be gilding the slime lily a bit, but this is GAME OF THRONES, where being merely homicidal doesn’t always indicate somebody’s a bad person. These sequences also give us Mark Gatiss, back again as the Braavosian banker and Ashton-Griffiths as the jovial Mace bursts into song.

Then there’s Meereen, where Daenerys’ (Emilia Clarke) fiancé Hizdahr (Joel Fry) attends to some business before joining the Queen and her retinue – her boyfriend Daario (Michiel Huisman), Tyrion Lannister (Peter Dinklage) and confidante Missendei (Nathalie Emmanuel) – in the royal box at the Great Pit. Daenerys reluctantly claps her hands for the games to start. After the first round, Jorah (Iain Glen) strides out onto the field, conquering challenger after challenger.

Then Jorah hurls a spear at the royal box. At first it appears that he’s trying to assassinate Daenerys, but then we see that Jorah has taken down a masked Son of the Harpy – one of many suddenly appearing in the crowd. There is chaos as citizens flee or take on the gold-masked men who want to bring back slavery. Hizdahr is slain in the melee. Daario and Jorah both try to protect Daenerys, but in the end, the two warriors are in the center of the Great Pit, with Daenerys, Missendei and Tyrion between them, all facing down a horde of Sons of the Harpy. Things look dire – and then there’s that unmistakable roar and Dany’s not-so-little-any-more “son” the dragon Drogon flies down to burn and shred and maul and basically destroy his “mother’s” enemies. Although Drogon is hit by a few spears, he is still well enough to fly away with Daenerys on his back.

Drogon looks wonderfully dimensional and Clarke interacts with the dragon beautifully, even if a few of the shots of them flying out of the pit are not quite as persuasive as most of the visual effects on this series. Dinklage sells Tyrion’s stunned reaction to the human/dragon interaction in spot-on fashion and it’s exactly the right thing to happen at exactly the right moment.