HANNIBAL: Bryan Fuller on HANNIBAL Season 3, endings and what Season 4 could be – Exclusive interview 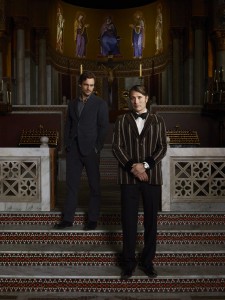 NBC has announced that Season 3 of HANNIBAL, Thursdays at 10 PM, will be its last. Executive producer Bryan Fuller, who has adapted Thomas Harris’ novels about the charismatic, cannibalistic serial killer of the title, played here by Mads Mikkelsen, has told various news outlets that “NBC has allowed us to craft a television series that no other broadcast network would have dared,” expressing his gratitude to the network while suggesting that he’s open to making a fourth series for another outlet.

In Part 2 of our exclusive telephone interview, Fuller hints about how Season 4 might work, along with discussing many other HANNIBAL issues.

ASSIGNMENT X: You mentioned that there were rights issues with the Clarice Starling character, who is the protagonist of the next part of the story, Harris’ novel THE SILENCE OF THE LAMBS. Assuming you have a Season 4 and those rights issues haven’t been resolved, do you have a Plan B?

BRYAN FULLER: Yeah. Actually, the Plan B, the way this season ends, going right into THE SILENCE OF THE LAMBS wouldn’t make sense. So we have an ending that, like the ending for the first season and the second season, could function as the end of the series, or it could function as a platform from which we reinvent the show.

AX: If you do go into SILENCE OF THE LAMBS, FBI agent Will Graham, one of HANNIBAL’s leads so far, played by Hugh Dancy, is sidelined in the original story. Would you be reluctant to sideline Will?

FULLER: I have ideas on how to keep him integrated.

AX: Michael Pitt played Mason Verger in Season 2. Why is Joe Anderson playing Mason in Season 3, and is the difference in his appearance explained by Mason being mutilated in Season 2?

BRYAN FULLER: Yes. We had a very long negotiation with Michael, and ultimately, he decided not to come back. I’d been a fan of Joe Anderson for quite some time and was actually somebody that I was talking to the cast and saying, “Michael doesn’t want to come back this season,” and Tony DeMeo was like, “What about Joe Anderson? He’s so great.” And I was like, “He is great. Let’s try to get Joe.” And then we did.

AX: Can you say how long Joe Anderson is spending in the makeup chair for Mason?

FULLER: I think it was four hours, because his face is completely savaged. He brought such a wonderful energy to the role and did something completely different than what Michael was doing in Season 2, yet made it an homage in a way to Gary Oldman’s performance [as Mason Verger] in [the feature film] HANNIBAL, yet completely unique. The first conversation I had with Joe, he was like, “So what role do you guys want me to play?” Because he didn’t know. And I was like, “Mason Verger.” “Who’s he?” “Well, did you see the HANNIBAL movie?” “Yes, I loved it.” “The Gary Oldman character.” And he was just like, “That’s the guy you want me to play? I’m in. I’m absolutely in.”

AX: Are there any other cast changes where a new actor is coming in for an established character?

AX: What about whoever is playing young Hannibal?

FULLER: When we see young Hannibal, it’s very brief, it’s from a distance and we never see their face.

AX: So it’s not a performance-based requirement, it’s just a resemblance to Mads Mikkelsen requirement?

AX: Are any of our established characters besides Mason Verger dealing with new physical disabilities as a result of the Season 2 finale?

AX: Raul Esparza plays Frederick Chilton, who got shot in the face last season. Is he dealing with a lot of prosthetics?

FULLER: Yes. Actually, Episode Four is the episode that takes place after the [Season 2] finale. We start eight months ahead and then we see where everybody is now, and then we go back and see how they got there. And then we move on with the story. So we get to see how the survivors survived and what the complications are.

AX: How did you decide on Richard Armitage to play serial killer/Hannibal acolyte Francis Dolarhyde in the RED DRAGON section?

FULLER: I had been a fan of his for awhile, and we have several friends in common, and so I’ve always wanted to work with him, because I’d heard such great things about him as a human being and had seen his performances and so he was always in my mind as somebody that we needed to have on HANNIBAL.

Also, in my mind, I had many conversations with Lee Pace [who starred in Fuller’s PUSHING DAISIES] about playing Francis Dolarhyde. And so until the moment that Lee was definitely not available, I was like, “Okay …” HALT AND CATCH FIRE [which stars Pace], when it was picked up, I was secretly, not so secretly disappointed, because then I knew that Lee wouldn’t be available. Then it was like, “Who would be great is Richard,” and I reached out to his reps, who are also my reps, and we got on the phone, and he was just lovely and fascinated and was really up for the challenge of the role and stepped in with such ownership and a collaborative spirit in shaping this new adaptation, and there were many conversations that we had where he was like, “You know, this moment has a particular sweetness to it, and can we weave that into the story?” and “Were you planning on doing this?” He had a lot of really great, interesting ideas about the character and let me read his journals that he was composing [about] his approach and they were meticulously written and well-referenced and demonstrated such a sophisticated understanding of the role. And in the novel, he’s a tragic figure.

For me, I really wanted to challenge the audience into trying to forget that this is a horrible killer of families and a man who is insane that is looking [for] and perhaps has found some rope that he can pull himself out of his insanity and root for him in overcoming his madness. And I think you need an actor like Richard, who brings an innate likability and vulnerability, as well as a ferocity, to the character. And I’m excited for people to see what he does, because it’s both heartbreaking and terrifying.

AX: He was surprisingly Shakespearean in his approach to the dwarf leader in the HOBBIT trilogy …

FULLER: He was great in those movies. And buried under a lot of makeup. So it’s interesting to see his face exposed. [As Dolarhyde] he has the cleft palate. It’s odd to see how much one thing can change the structure of a person’s face.

AX: Are we going to see Dolarhyde’s flashbacks?

FULLER: We see a couple. We see some very limited things that give you an indication of his trauma, but so much of the real estate dedicated to the Francis Dolarhyde story is about his relationship with Reba McClane, who’s this beacon of humanity that might be able to save him from himself, and so I was excited about adapting that, because in reading the book, it was one of the most romantic stories, obviously, in very corrupt circumstances, that the idea of a man bringing a blind woman to the zoo and wanting her to experience it by facilitating her touching the tiger is one of the most beautiful, romantic things I’ve ever seen in any story, and its simplicity and yet in its eloquence, so I wanted to make sure when we told that aspect of their relationship that we were rooting for these two as a couple to overcome.

AX: How did you do the tiger scene to make it safe for the actors?

FULLER: We had a fake tiger.

AX: You cast Rutina Wesley as Reba. Were you a fan of her portrayal of Tara Thornton in TRUE BLOOD?

FULLER: Yes, I was, particularly in those early seasons, when she had more of a human story, and the scenes with her mother in those first two seasons and her romance. When her name came up – it was very simple – I called Grace Wu at NBC and said, “Is there anybody that you folks are excited about working with as we look to cast Reba?” And she said, “What do you think of Rutina Wesley?” I said, “I love her, let’s cast her.”

AX: Should people who are familiar with RED DRAGON be prepared to have our expectations changed in terms of who makes it to the end of that book alive?

FULLER: There are some shifts there and it doesn’t necessarily lay out exactly as it did in the book. It’s pretty close.

AX: Are there any characters from the books or other types of characters that you want to introduce?

FULLER: I do want to get into the tale of Lady Murasaki and Uncle Robertus. So those are storylines that we talked about in Season 3 and then shifted Murasaki into Chiyo [played by Tao Okamoto], because a lot of what we were doing for that character required a certain thrall with Hannibal that I didn’t want to give to a mature woman who is in command of her own story, because there’s a certain dynamic that I wouldn’t necessarily buy in a more sophisticated character. So we shifted that part of our story to Chiyo, and a lot of the Murasaki stuff we held onto and would love to make that part of Season 4.

Stayed tuned for Part 3 of our exclusive Bryan Fuller interview.