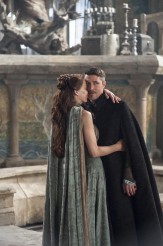 Lots of major plot movement and some startling scenes, though not huge action 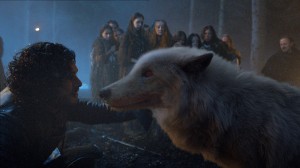 GAME OF THRONES fans should not be over-worried by the title of the episode “Kill the Boy” – no, Lady Melisandre (Carice Van Houten) is not on another royal sacrifice kick. Rather, this is metaphorical advice given by Maester Aemon (Peter Vaughan) to Night’s Watch Lord Commander Jon Snow (Kit Harington) when Jon wants Aemon’s counsel. Aemon tells Jon to “kill the boy” so the man can grow – i.e., Jon should trust his own decisions.

Since Jon’s decision is that it is necessary to join with the Wildlings if the world is going to be saved from the White Walkers, a lot of the Night’s Watch is appalled. For that matter, so is Tormund Giantsbane (Kristofer Hivju), the Wildling captive whom Jon frees so that he can lead his people from North of the Wall to South of the Wall. Tormund agrees, on the condition that Jon accompanies him. Stannis Baratheon (Stephen Dillane) gives Jon ten ships, but isn’t going to wait to see whether or not he gets a Wildling army – he’s marching on Roose Bolton (Michael McElhatton) at Winterfell.

The scenes with Aemon and Jon and Jon and Tormund have a lot of power. As Jon continues to grow in his stature as Lord Commander of the Night’s Watch, so does Harington continue to deepen in his portrayal of the character. Harington has taken Jon from being a relative lightweight to someone as authoritative as any of the other heroic figures in the saga, and that’s saying a good deal.

At Winterfell, Ramsay Bolton (Iwas Rheon) puts bride-to-be Sansa (Sophie Turner) through an awful supper where the newly-elevated young lord forces Theon Greyjoy (Alfie Allen) to apologize to Sansa for killing her two younger brothers. We know and Theon knows that he actually killed two other boys, but Sansa doesn’t. Then again, she’s marrying into House Bolton in order to take her revenge on Warden of the North Roose, who killed Sansa’s mother Catelyn and brother Robb, so maybe she can fold Theon into the vengeance package, assuming she ever gets to deliver it.

We are at this point being asked to sympathize with Theon. However, Theon did kill a couple of children and has done nothing to make us like him. Feel sorry for him, sure – he’s undergone cruel and unusual punishment that wasn’t even punishment. Ramsay, who emasculated Theon, doesn’t care about the dead boys, he just like asserting his power in the most brutal way possible. We care about Sansa’s discomfort, but showing us Theon’s shame before he’s done anything to redeem himself seems a bit oblivious.

Ramsay is alarmed to hear that Roose’s new wife is pregnant. Roose, alone with Ramsay, talks about how Ramsay came to be born (through rape, of course) and how Roose knew that Ramsay was his son. The audience can easily vouch for this – Ramsay is certainly a bit of skin off the old corpse, except that Ramsay seems even worse than his brutal father. Ramsay is happy to vow to help Roose fend off Stannis’ approaching army.

Ramsay has become a fully-fledged successor in hatefulness to the late Joffrey Baratheon.  One can’t exactly accuse Ramsay of being more sadistic than Joffrey, since Joffrey couldn’t have been more monstrous if he’d tried, but Ramsay is more cunning about it, which makes it that more worrisome (we knew that Joffrey could be outwitted easily; that’s not the case here). Of course, this also makes Ramsay a more formidable villain, and with so many morally ambiguous figures on the landscape (Stannis, Jaime, Tormund, Lady Melisandre), GAME OF THRONES can afford to have a least one total fiend, and Rheon is doing a bang-up job of providing him.

In Meereen, Daenerys (Emilia Clarke) mourns the fallen Ser Barristan and rounds up the heads of all the leading Meereen households, going so far as to feed one to the two dragons still in the dungeons. Daenerys then seeks the counsel of Missendei (Nathalie Emmanuel), who essentially tells the queen that she is best served by her own instincts. Daenerys goes to the captive head-of-household Hizdahr zo Loraq (Joel Fry) and tells him first that she finally sees the point in reopening the fighting pits, though only free men may fight – she will not reinstitute slavery. She also thinks she’ll get more goodwill in Meereen if she marries a local noble, so she’ll marry Hizdahr, who is extremely surprised by the news.

This makes a nice bookend to the sequences at the Wall, with both Jon and Daenerys being advised that they must trust themselves to make the right decisions.

Missendei tends to the wounded Grey Worm (Jacob Anderson), who is ashamed that he was afraid – not of death, but of never seeing Missendei again. Missendei kisses Grey Worm and gets into bed with him. We know that as an Unsullied, Grey Worm is not intact, but we’re confident that some mutually satisfying activity will occur. This is a scene where something good happens for two likable characters, which probably means something horrendous will happen to one, the other or both soon, but for now, it’s a pleasing interlude.

Trying to avoid pirates, Ser Jorah (Iain Glen) takes Tyrion (Peter Dinklage) by boat through Valeria, where the Doom fell. The Doom was a long-ago disaster that seems to have combined fire and disease. The two men are astonished to see a dragon flying overhead; this is the runaway Drogon, who ignores them and simply keeps going.

Valeria is now the domain of the Stone Men, people who have been driven mad by the grayscale ailment (Stannis’ daughter Shireen has it, though hers has been arrested). Stone Men attack the boat. Ser Jorah rescues Tyrion from drowning, but we see the knight has been infected with grayscale in the process.

Seeing Tyrion when he at last appears at the end of the episode is a reminder of how valuable the character is. There are other more visually iconic elements of GAME OF THRONES, but there is something in Dinklage’s combination of sardonic wit and wistfulness that epitomizes the feel of the series.

With several outstanding dramatic sequences in varying locales, “Kill the Boy” is more proof of how vital GAME OF THRONES can be.