Home » Night at the Museum Secret of the Tomb soundtrack review 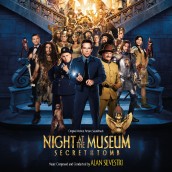 CD Review: NIGHT AT THE MUSEUM: SECRET OF THE TOMB soundtrack

When looking for Hollywood scores filled with unabashedly glittering themes and melody, you might as well feel like visiting a museum. However, Alan Silvestri thankfully remains anything but a fossil in this practice. As a composer who’s been applying this relatively ancient orchestral approach since the long-lost days of BACK TO THE FUTURE, Silvestri has remained vibrant in conveying a child-like sense of magic and adventure when its come to fantastical wish fulfillment, no more so than in his continuing trips to this Fox family franchise, of which SECRET OF THE TOMB threatens to be the last admission.

If so, let it not be said that Silvestri isn’t shining these MUSEUM lights with extra brightness. As he’s done with such popular triptychs as the FUTURE and PREDATOR films, Silvestri has a keen sense of history when it comes to reprising all of the themes he’s built his musical foundations on, with a wonderful, flowing sense of cohesiveness that’s abounding with new motivic ideas. Better yet, these movies’ draws of exhibits popping to humorous life is a virtual gallery for Silvestri to show off his various styles, from the knightly nobleness of Sir Lancelot to the sinister, ethnic rhythms of its Egyptian villain (a la the composer’s swashbuckling score for THE MUMMY RETURNS). But whatever the historical figure he’s galloping with, all of the music is tied together with Silvestri’s trademarked talent for lush strings lines, twinkling percussion and heroic brass – the kind of music which has now been enchanting young audiences for more than a few years. SECRET OF THE TOMB is yet another thrilling repository in which to visit these old musical friends in all of their golden, uncondescending sweetness and fun, once again show that dust is in danger of settling on Alan Silvestri’s enchanting, and energetic enthusiasm.

Click on the link to Purchase the NIGHT AT THE MUSEUM: SECRET OF THE TOMB soundtrack

Article Source: Assignment X
Article:CD Review of  the NIGHT AT THE MUSEUM: SECRET OF THE TOMB soundtrack