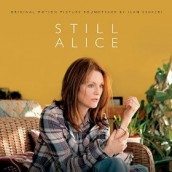 A professor losing her smarts to early onset Alzheimer’s has not only inspired a Golden Globe-winning performance from actress Julianne Moore, but also a similarly delicate, and painfully beautiful score from Ilan Eshkeri – whose score here captures the musical memory of his female-centered chamber work for last year’s THE INVISIBLE WOMAN. Where that character was dealing with lovelorn anguish, the subtly dissonant violins and delicate piano that inflect Alice’s struggle are about holding onto cherished life itself.

Where a less-indie approach would’ve likely meant bringing on far bigger heartstrings, the intimacy of Eshkeri’s work is perhaps even more emotional in its seeming simplicity. For nothing has the immediate anguish of just a few musicians playing with strong, neo-classical themes that convey a woman of sophistication, struggling to hold onto the shards of her thoughts. But while STILL ALICE is full of quiet anguished, it’s far more of a lyrical listen than it is a sad one, its poetic melodies strangely soothing as a woman goes not-so quietly into the tragic night. Karen Elson’s closing song “If I Had a Boat” has a fairy tale wistfulness to it that proves a nice compliment to Eshkeri’s poignant instrumentals.

Click on the link to Purchase the STILL ALICE soundtrack