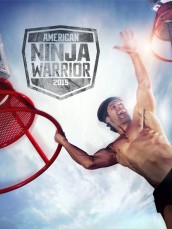 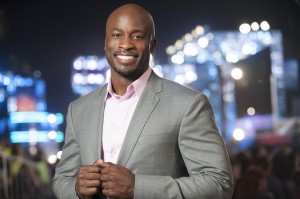 The athletic reality competition series AMERICAN NINJA WARRIOR began life on the G4 network as a U.S. adaptation of the Japanese SASUKE, and is now on NBC, Mondays at 8 PM, in its seventh season. The show features a group of very fit people from various backgrounds attempting to make it through obstacles courses of increasing difficulty.

Akbar Gbaja-Biamila has been hosting AMERICAN NINJA WARRIOR alongside Matt Iseman since last season. Gbaja-Biamila, who played high school basketball at Crenshaw High School in Southern California before becoming a professional football player, was one of three athletes on the team for 2010’s EXPEDITION IMPOSSIBLE. He is also a host on the NFL Network, and sounds genuinely passionate when discussing AMERICAN NINJA WARRIOR.

ASSIGNMENT X: When you were in the NFL, did you know you’d want to do something like this job when you stopped playing, or did you think it over first?

AKBAR GBAJA-BIAMILA: Nope. I knew exactly what I wanted to do. In fact, I got my degree in it at San Diego State, Communication/New Media Studies. I loved it since I was a kid. I just remember watching some of my favorite shows growing up, watching some of the local broadcasters, I would just think, “I would love to do something like this,” and when this opportunity came up for me, I was just like, “Are you kidding me?” This was my opportunity to give a voice to the sport and to athleticism that I’ve always loved. That’s always been a part of my life.

AX: Is there a specific name for the kind of sport showcased on AMERICAN NINJA WARRIOR?

AX: What are you learning about physical activity from this show that you didn’t know from playing football?

GBAJA-BIAMILA: That’s a great question. The biggest and the strongest don’t always survive. I come from a sport where you lift weights, you push and you shove and you tackle, and most people look at us as the ultimate sign and symbol of strength. But when I started to get a better appreciation of strength – just because you’re smaller than I am doesn’t mean that you’re not as strong. I’ve seen guys carry their body weight in a way that NFL athletes can’t, that NBA players can’t, that boxers can’t. These guys are totally fit from head to toe, and it’s not just a speed thing – it’s a combination of everything, and that to me was a brand-new thing, because I came from a very macho, macho sport, and this one has a lot to do with finesse and power. 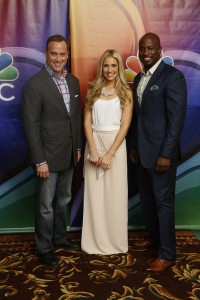 AX: Are there upper and lower age limits for AMERICAN NINJA WARRIOR?

GBAJA-BIAMILA: Twenty-one is the youngest. You have to be twenty-one, so there are a lot of people out there now – I know seventeen-, eighteen-year-olds saying, “In three years, I’ll see you on the show.” They’re training for that moment to get on the show.

AX: If you want to do something like this, is there an age past which you’re not going to be able to do it?

GBAJA-BIAMILA: I don’t think so. We’ve had a competitor named Grandpa Ninja, who was fifty-five-plus, we’ve had John Stewart last year, who was fifty-two years old, and you want to think when you get up in age that you’re not likely to succeed, but it’s not the case. There are guys who really make you rethink the way you see AARP. It’s totally different.

GBAJA-BIAMILA: Like I said before, I think ultimately the ones who are going to be successful are the ones who train on obstacle courses. It used to be where the parkour guys came out and they were successful. And then you saw a wave of rock climbers come out and then they were successful. And now you’re starting to see a hybrid and a fusion, where you’re seeing guys who are rock climbers, but then they’re doing parkour or vice-versa, they’re doing parkour and then rock climbing, or guys who were track or NFL guys now getting in. So they’re using multiple disciplines to be able to train for this, and that’s what makes this so unique. You have to use multiple disciplines. You’re not just going to come in and dominate with your athleticism, because if you’re dominant athletically, then you’ll be challenged strength-wise, so you have to have both.

AX: As a host, do you have favorites and do you have to try to conceal that while you’re hosting, or are you a fan of whoever you’re commenting on?

GBAJA-BIAMILA: Each athlete that comes up, I genuinely feel like I can connect with each one of them, because there’s a story in there that I’ve gone through with my arc of my life through playing professional sports, high school and college, I look and go, “Oh, wow, I can relate to that.” Maybe that guy is struggling through self-doubt or maybe he was bullied, or maybe he was cut from a basketball team and he never had an opportunity, or his parents took away something from him. Each one of them, I think, “This guy is ready. I think this is the guy.” So each individual call to me is personal. So we’re rooting for [everyone]. I don’t think there are a lot of shows out there like that, that you get the actual host rooting for you. There’s doubt, but there’s, “I know he can do it.”

AX: What else are you doing that we should know about?

GBAJA-BIAMILA: No. Currently, not right now. I do a lot of stuff foundation-wise with the Asomugha Foundation, a foundation that is dedicated towards helping widows and orphans in need, and also going into the inner city and helping kids get college exposure, taking them on college tours, so they’re the two main purposes of this foundation. Those are the two things I’m doing now, and then of course I do my other job, which is the NFL Network. I’m a commentator on THE NFL FANTASY LIVE SHOW.

AX: What would you most like people to know about AMERICAN NINJA WARRIOR?

GBAJA-BIAMILA: To be good is not good enough if you dream of being great.

This interview was conducted during NBC’s 2015 spring press day at Pasadena’s Langham-Huntington Hotel.

Five THOR Characters or Stories We’d Like to See in THOR 2
TV Review: ONCE UPON A TIME - Season 1 - “The Return”
LUCIFER: Rachael Harris chats Season 3 - Exclusive Interview
WE NEED TO TALK ABOUT COSBY: Director W. Kamau Bell on new documentary...