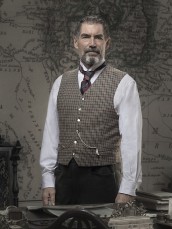 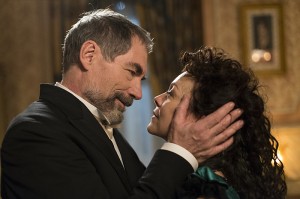 In creator John Logan’s Showtime series PENNY DREADFUL, now in its second season Sundays at 10 PM, nobody is having an easy time of it in late nineteenth-century London. American gunslinger Ethan Chandler (Josh Hartnett) is dealing with his dual nature and the death of his girlfriend Brona (Billie Piper), whose corpse has been appropriated by Dr. Victor Frankenstein (Harry Treadaway) to make a mate for his original creation (Rory Kinnear). Medium Vanessa Ives, played by Eva Green, is coping with demonic possession.

Sir Malcolm Murray, played by Timothy Dalton, is at the center of all these people, and more. Sir Malcolm has been a colonialist of the worst sort, but he’s been through a lot. Last season, after employing all manner of methods to locate his missing daughter Mina (Olivia Llewellyn), Sir Malcolm found her, but by then she was a vampire and he had to kill her in order to save Vanessa. This season, Sir Malcolm has at last found romantic companionship – with the murderous witch Evelyn Poole, played by Helen McCrory. This does not bode well for Sir Malcolm’s friends, or indeed Sir Malcolm himself.

Dalton, whose stage, film and television credits encompass everything from Shakespeare to James Bond to Rhett Butler, talks about both the first and second seasons of PENNY DREADFUL.

ASSIGNMENT X: Is there anybody you didn’t get to work with much in Season 1 who you’re looking forward to getting to work with more this season?

TIMOTHY DALTON: Well, I worked with Helen a lot and she’s really good, she’s fun to work with. It’s very important when you work with someone to be able to establish connection and commitment, and she’s got it, just as Eva had it. And she’s really nice.

AX: Besides playing Sir Malcolm, last season you and Eva Green had a scene where you played the Devil, who appears to Vanessa in the guise of Sir Malcolm. How did you enjoy that?

DALTON: Oh, I thought that was a terrific scene. I really liked that scene, the evil, wicked seduction of it. It’s also quite a frightening scene and she’s terribly vulnerable in it.

AX: And do you have a particular aspect of Sir Malcolm that you like more than any other? The ferocious side or the loving side or the wistful side …?

DALTON: Well, I think if I single one out, it would diminish the character, really. There’s an awful lot about Sir Malcolm not to like, so go for that, and then try and find something that surprises you. I mean, my favorite line of mine, perhaps, in that first season was, “To save my daughter, I would murder the world.” Because who does not understand that, that depth of emotional commitment to your own, to your blood, to your daughter? And that means that you can get away with an awful lot, when you know that he would murder the world to save his daughter.

This interview was conducted at Showtime’s session for the Television Critics Association at Pasadena’s Langham-Huntington Hotel.