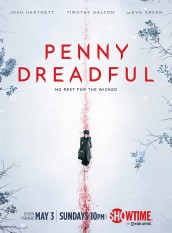 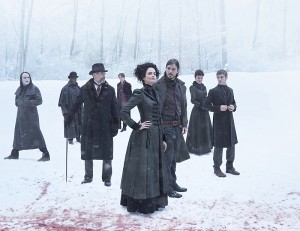 As PENNY DREADFUL creator/executive producer John Logan notes, “No two witches are the same, no two vampires are the same, no two demonically-possessed women are the same.” Viewers of the Showtime series were likely to have figured this out from first season, and now second season is upon us, Sundays at 10 PM. We see not only the further experiences of gunfighter/demon fighter-with-a-huge secret Ethan Chandler (Josh Hartnett), Devil-possessed psychic Vanessa Ives (Eva Green), explorer Sir Malcolm Murray (Timothy Dalton), his loyal aide Sembene (Danny Sapani), ageless Dorian Gray (Reeve Carney), Dr. Victor Frankenstein (Harry Treadaway), his Creature (Rory Kinnear) and more, but we also learn the secrets of Madame Kali, aka Evelyn Poole, played by Helen McCrory. Introduced in Season 1, Evelyn turns out to be a bit less of a parlor medium and a bit more of a hardcore Countess Bathory offshoot, and she’s only one of the perils in Season 2.

Logan, a Tony winner for his play RED, is also a prolific screenwriter who wrote the Bond films SKYFALL and SPECTRE, as well as AVIATOR, GLADIATOR and STAR TREK: NEMESIS, among others. So far, the Chicago-born scribe has written every episode of PENNY DREADFUL. The series, set in 1890s London, shoots in Ireland. Logan spends a lot of time there, but he attends Showtime’s day for the Television Critics Association at Pasadena’s Langham-Huntington Hotel to talk about his creation.

AX: How did you balance writing Season 2 of PENNY DREADFUL with working on the SPECTRE screenplay?

JOHN LOGAN: Season 2 was written a long time ago. It was written well into Season 1, because it’s total immersion when we’re there in Dublin working on the show and the voices are just echoing madly.

AX: How hard is it for you to write every single episode? Do you think you’ll be doing that for the entire life of PENNY DREADFUL?

LOGAN: It’s a challenge, because you want to make sure you don’t run out of steam, you don’t run out of energy, that you’re fresh, that you’re not limiting yourself. It’s like a composer – some composers don’t compose on the piano, because their piano-playing isn’t that good. So they compose on a pad, they compose differently. I’m learning that the demands of writing ten episodes are extreme. Will I eventually bring in other writers? Possibly. If I ever can bear to spend a little time away from the characters, maybe. Who knows? All for the future.

LOGAN: No, it’s in the formative stage. I’ve charted the series through the first three seasons very clearly. Season 4 is a jump ball, so we’ll see where the characters end up.

AX: Do you have an end game in mind yet?

AX: You’ve been a horror fan for most of your life. Do you remember what got you into the genre?

LOGAN: FRANKENSTEIN. Originally, the Boris Karloff movie, then the Christopher Lee movie, and then the book. And that was the way I fell into the entire sordid mess.

AX: Did you find any inspiration in Francis Ford Coppola’s DRACULA? Not that they’re at all the same, but there seem to be some similarities in mood …

LOGAN: Oh, God, yes. I love Coppola’s DRACULA, every frame of it. And all of those movies that I watched, first as a kid, then as an adult, have filtered through and informed my work. I stand on the shoulders of those who have walked before me. 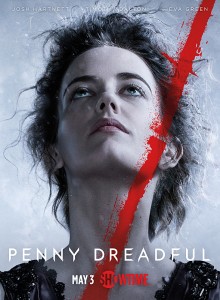 AX: How did you arrive at Helen McCrory to play Madame Kali/Evelyn Poole?

LOGAN: I knew that I wanted this character as an antagonist through the season. I had worked with Helen both on HUGO and on SKYFALL and I’d seen her on stage, and she’s an amazing actor. So I went to her about two-and-a-half years ago and said, “I’m going to beg you to take a part. You have two scenes in the first season, and then the second season is all you.” And because of our friendship, because of her faith in me as a writer, she took the chance. And she’s an amazingly agile performer, a very soulful performer, and like Eva Green, fearless.

AX: Did you envision that Eva Green was going to play the possession scenes the way that she played them? Was that what you had in mind, or was she a revelation to you?

LOGAN: Everything Eva does exceeds my expectations. We spend a lot of time together, Eva and I, and we talk about things in great detail, and some of them are difficult scenes we just read together. And so we build the performance as a duo, and then every time I go on the set, she exceeds anything I imagine. . I always say that this series to me asks one very simple question, which is, “Who is Vanessa Ives?” And I don’t believe I will ever know. And as long as she remains an enigma to me, I will continue to try to unwrap her. We’ve had eight hours with a character who I believe that story’s going to be told endlessly. And Eva Green herself, she’s an Alpine mountaineer, she’s only happy in the high altitudes. And so I have to challenge her and I have to challenge myself to climb higher every single line, every single episode and every single season.

AX: Is there anything that the actors are doing that influences some of the things you’re coming up with for them to do?

LOGAN: Always. Always. I mean, I’m inspired more by the actors than [anything] else. When you see how they spark, how they connect, those actors who just click together magnificently, where the chemistry is, you imagine it on the page and you see it on the set and you hope it translates to the screen, and when it does, it’s absolutely lightning and you just want to keep writing on it.

AX: Do you see tackling other elements of world folklore as the series continues?

AX: Will Sembene provide a way in to African mythology eventually? He’s already alluded to something to a supernatural incident in his homeland.

AX: So far, when the Devil appears to Vanessa, he always appears as a character we already know. Is the Devil eventually going to appear as a separate entity?

LOGAN: Characterizing a supernatural being like an angel or the Devil or God is always difficult. So I believe we have found, and find in Season 2, ways to manifest that that are untraditional but striking.

AX: Is there anybody who you think is ideally suited to playing the Devil amongst your cast?

LOGAN: [laughs] Just friends of mine, just people I know, that’s all. No, we have an angelic cast, not a devilish cast.

AX: Given all of the physical moving parts on your sets, are there any “now it can be told” accidents from Season 1?

LOGAN: No. I’m very glad to say we have a very scrupulous crew in Dublin to make sure everything is very safe, so it’s a very controlled set. For all the seeming mayhem and madness, it’s actually ice-cold on that set. We keep it very controlled.

AX: Speaking of sets, will we be seeing the Grand Guignol again?

AX: Can you talk about the design aesthetic for Evelyn Poole’s home?

LOGAN: Making it organic to the character, because she’s a very particular character. She’s a character of elegance and grace and beauty, and a character of absolute barbarity. So that’s what we tried to capture in the set.

AX: What scares you about today’s world?

LOGAN: What scares me about today’s world? Lack of compassion, alienation of those who are unlike you.

AX: Are we at a similar place with science right now as they were then?

LOGAN: Completely. Completely. One of the reasons this is set in 1891 and now 1892 in this season is they were looking at a world that was changing so technologically quickly, they couldn’t keep up. The old gods were being replaced by the new gods of this turbine engine and steam and telegraphy and electrical lighting, and I feel we’re in exactly the same place. Who knows what demons will come from the Internet, from Facebook, from the communication that moves so quickly that we lose the idea of actually interacting with other people? I think it’s one of the main reasons I wrote the series and why I think it’s relevant, is that I think we live in that world right now. On our show, it’s Victorian London, it has cobblestone streets and it has fog, but it’s exactly the world we live in as I see it.

AX: How has the fan reaction been for PENNY DREADFUL?

LOGAN: Oh, I’m thrilled with the reaction. Especially amongst the hardcore genre fans, because that’s the bread and butter, and those are the people I didn’t want to disappoint and didn’t want to betray. So the fact that they’ve responded so favorably is fantastic.