Home » Queenie and To Kill a Priest soundtrack reviews 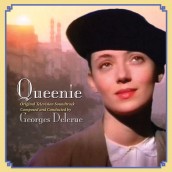 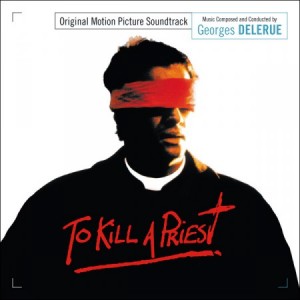 Georges Delerue wrote an astonish 18 scores alone from 1987-88. Two reality-based scores from that time now show his versatility, first making an emotionally empowering Indian passage to Hollywood, and then movingly martyring a leader doomed against totalitarian odds. Even given his French birthright, few composers had a naturally feminine quality to their work like Delerue, whose string, violin and flute empathy embodies an ersatz Merle Oberon (in the exotic form of Mia Sara) in his score for QUEENIE, one of those passion-filled TV miniseries of yore involving a woman climbing her way to the top through beauty and bedroom, a journey begun for the half-caste heroine in India. It’s an opportunity that allowed Delerue the rare opportunity to luxuriate in that continent’s rhythms, as ruled by imperious, English brass, creating a delicate, yet determined theme that formed the musical bedrock over two nights on ABC. Yet while the music is proud of its heritage as first, Delerue does much to hide its ethnic identity in both suspenseful, and tender fashion as QUEENIE tries to succeed in a racist movie society – a sense of danger and discovery that’s perhaps even more important than romance in Intrada’s sumptuous album.

Far darker, but no less determined in its musical cause is Delerue’s score for an English-language, star-powered take on the Commie-backed murder of Solidarity-supporting Polish priest Jerzy Popieluszko (here called “Father Alek”), as directed by Polish expatriate Agnieska Holland (EUROPA EUROPA). Having powerfully dealt with the church in TRUE CONFESSIONS and AGNES OF GOD Delerue plays the grim pursuit of Ed Harris’ secret police agent and Christopher Lambert’s fateful man of the people’s cloth with tragic, almost pre-determined realization of sacrifice. Yet the score is more about suspense and sadness, judiciously using a religious chorus for the fateful end, with anti-establishment singer Joan Baez accompanies the singers for “The Crimes of Cain,” where her iconic folk voice helps the theme rise to the heavens, hinting that the murder would be one more withdrawn brick from the Berlin wall that toppled Russia’s control of Poland. Music Box’s expanded release of Delerue’s fine work includes a far lighter collection of Polish waltzes and Mazurkas, along with Delerue himself singing a vocalese version of PRIEST‘s end tune.

Click on the link to Purchase the QUEENIE soundtrack

Article Source: Assignment X
Article:CD Review of  the QUEENIE and TO KILL A PRIEST soundtracks