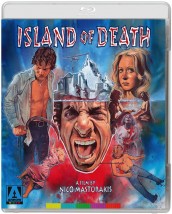 Reviewed this week: ISLAND OF DEATH, GUN WOMAN, NIGHTLIGHT and much more 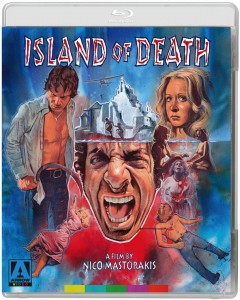 ISLAND OF DEATH – If you are a fan of the Eurotrash/Eurosleaze movie genre, ISLAND OF DEATH may be a familiar title to you. Namely because it has the honor of being one of the first movies to ever get placed on England’s “video nasties” list. If you ever wanted a foreign movie to include every crazy or weird vice known to mankind, ISLAND OF DEATH is what you want. Bestiality? Check. Lesbians? Check. Racism? Check. Rape? Check. Serial killers? Check. Crucifixion? Check. Full frontal? Check. Incest? Check. Lesbian poisoning? Check. Gay bashing? Check. Paint wrestling? Check. White brick burial? Check. If there was a kitchen sink in production, they would have thrown it in. Here’s the skinny on the film, a couple vacationing on a Greek island have a very twisted view on what God wants. And if they see something going on they think God disapproves of, they seek it out and end it. The funny thing here is that they are so over-the-top with, well, everything that it becomes an unintentional comedy. Nothing is off limits and it stretches the boundaries of good taste in so many extreme ways 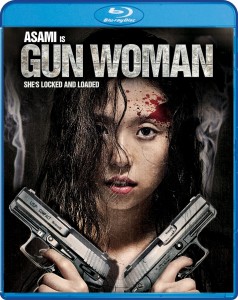 GUN WOMAN – This is one of those rare times when you watch something and it so shocks you in crazy ways that you find it pretty amazing that someone was allowed to get away with what they did in the film. GUN WOMAN sounds innocent enough as an action flick about some woman probably seeking revenge for something. But in reality it is a throwback to exploitation films of old that feature macabre characters, crazy revenge plans that involve self bodily torture and a gal that bravely (not sure if that’s the right word) is full frontal nude for the entire back half of the film. The one thing that ISLAND OF DEATH did not have is contained within GUN WOMAN – necrophilia. Apparently, some bats**t crazy people decided to create a one-stop shop for people who enjoy having sex with the dead to come and get their rocks off in private under high security. Meanwhile, a wounded assassin is looking for revenge against the man that killed his wife. So he saves a drugged out woman (Japanese actress Asami) and methodically trains her in the ways to kills people, withstand horrible pain and most important of all conceal weapons inside of herself. That’s right, inside her body. Asami becomes the tool in which revenge is gotten through this necrophilia club where no guns are allowed. What follows is pure insanity on film. It’s fun. It’s bloody. It’s hard to watch. Good times were had. 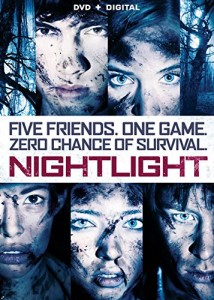 NIGHTLIGHT – Yet another found footage horror film but this one at least is pretty enjoyable about a doomed group of friends that travel to an isolated place in the wilderness in order to have a game where they try to spook one another. Of course, it all goes wrong as it turns out they decided to play the game in a haunted place known for people not coming back from. As it is a found footage film, there are bound to be shaky cams but this one has it in abundance so if that is something you don’t enjoy in your horror films this might be one to pass on. However, NIGHTLIGHT is actually fairly entertaining with some interesting ideas about the supernatural and haunting in general. Some of the scares come from the point of view of a flashlight that at times becomes haunted itself and is magically floating in the air depicting the action. It’s some of these interesting camera angles as well as the interesting scares that happen that make it worth checking out if you enjoy a good supernatural horror. 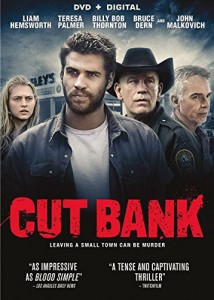 CUT BANK – A surprisingly decent festival circuit film with some pretty good actors such as John Malkovich, Billy Bob Thornton, Thor’s brother Liam Hemsworth and Teresa Palmer. It centers on Dwayne’s (Hemsworth) plan to get rich quick in order to leave the small town of CUT BANK that involves faking the death of a dastardly Post Office worker. But things go wrong quickly when a Post Office investigator comes to look at the body of the not-dead guy and a crazy local begins a killing rampage in order to find a missing package he must have. When real dead bodies begin to emerge, the Sheriff (Malkovich) is thrown into an investigation the small town has never before seen and Dwayne has to quickly alter his plans or either die or face jail time. The caper flick isn’t bad, it has some real good production values and the acting is top notch but the storyline is nothing original and something you have seen before in other movies that involve a small town with loads of secrets. Still might be worth checking out if you have exhausted the rest of your movie queue.

Other video titles out this week:

Article Source: Assignment X
Article: Blu-ray and DVD Reviews for the Week of May 26, 2015