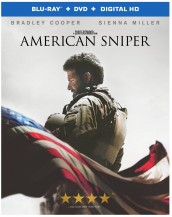 Some good stuff this week including the Academy Award winning AMERICAN SNIPER mixed in with some not-so-good stuff that highlights the week of DVD and Blu-ray titles for the week of May 19, 2015. 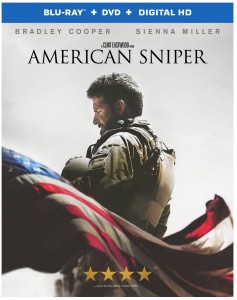 AMERICAN SNIPER – What hasn’t been said about AMERICAN SNIPER? It is an excellent movie that tells the other side of military action that is rarely portrayed in film. And whatever side you come down on concerning the validity of Chris Kyle’s retelling of his time in the war in Iraq, the movie is a powerhouse showing no doubt how many people shipped overseas felt during their time there and how hard it was to re-integrate into society after coming home. Director Clint Eastwood does an impressive job of showing just how hard of a time Kyle (played impressively by Bradley Cooper) had first becoming a Navy SEAL, then over time becoming the “most dangerous sniper” in the military and then eventually coming home to a point where he can’t face his family because of the nastiness that he experienced during his time in Iraq. As Kyle’s struggles with post-traumatic stress disorder, he starts to lose a bit of himself more and more, especially when it comes to his family. But at the same time, his dedication to protecting his brothers in the field is impressive and ultimately cost him his life (not shown here but the real person who was Kyle died while trying to help a fellow soldier with PTSD). Overall, it is a Hollywood style look at a remarkable man and a good entertaining story that even if you have a hard time with the actual facts of the book this film was made from, it is enjoyable. 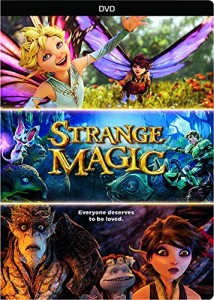 STRANGE MAGIC – This is one animated flick that on paper may have sounded like a good idea – get kids to learn about modern and classic songs along with a semi interesting tale about a fairy kingdom, a love potion, a big bad guy and hero fairies fighting the good fight. But in execution it turns into an eye-rolling extravaganza where the songs are forced into the tale in order to further the narrative. I’m sure that younger children will get a kick out of the constant singing and storyline told through songs they have never heard before (presumably), but older kids will never be down for it and as many of current animated features have something in them for everyone including adults, STRANGE MAGIC has little to anything that adults or older kids will find appealing. Also, for some reason, Disney isn’t offering the title in high definition, as there is no Blu-ray option here or even a digital copy, only on DVD. Maybe they are testing the waters to see interest and later will put out another edition to the film but it seems strange in this day and age that there would be no high definition option for an animated feature. If you have young kids, check it out, otherwise there is much better options out there. 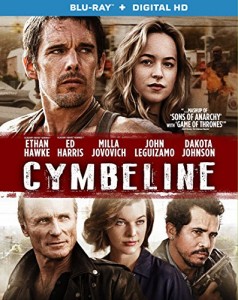 CYMBELINE – This is a modern re-telling of the Shakespearian play of the same name and it is given the ROMEO AND JULIET treatment, meaning everything in the movie is modern except for the language, which is straight from the original play. CYMBELINE is one of Shakespeare’s seldom performed plays and it shows if this film is any indication. The film itself is extremely hard to stomach on a variety of levels. First, it is confusing. There are so many characters and so many things going on that it would be difficult if they were speaking the King’s English. It’s nearly impossible with what resorts to gobbledygook to the uninformed. I won’t lie, I prefer to have my dialogue straightforward and without any subtle phrasing and complicated structure so from the start, I was already disliking the movie. Then to have it boil down to a biker gang that is involved in the drug trade working with and against the local police department all talking in Shakespearian language made it that much worse. I almost thought it was a joke at first or someone had switched my Blu-ray player to Old English or something when I wasn’t looking. It is a shame too given the star power involved with Ed Harris, Ethan Hawke, John Leguizamo and more involved it could have been much better. 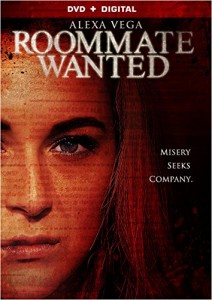 ROOMMATE WANTED – Don’t be fooled by the description or the box cover of this title, it is not a horror movie. It is a black comedy about two women that have little to no redeeming qualities and come to blows over a job opportunity for one and the other trying everything in her power to make her life a living hell because of it. The thing about ROOMMATE WANTED is that we never really figure out why the one women is being so awful to the other only because she is that type of person. Eventually, the one with the job opportunity fights back and it becomes a cavalcade of throwing objects, punches to the gut, the killing of small animals, poop tossing, painting of the others clothes and much more. There is no real solution to any of it and it is more of a day in the life of these horrible people that leaves a lot to be desired. But there are a lot of shots of hot chicks in their underwear so if that gets you going maybe it will be of interest, but don’t expect anything else. 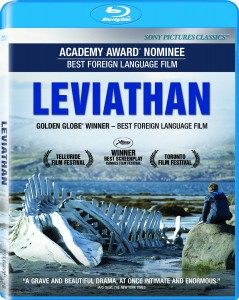 LEVIATHAN – This is an interesting import from Russia about a Russian army vet that has set about a decent life in a remote part of northern Russia where he and his wife work hard. However, when the mayor of his small town steals the vet’s property it quickly turns into a tragedy as we see this family man and worker descent into his own personal hell. It is an interesting take on Russian life and one that is not too favorably to not only the current regime but one’s that have preceded it. The Leviathan here is not so much a beast as it is a class struggle and the fight against tyranny and hypocrisy in a government that might as well be a criminal organization. LEVIATHAN is a powerful drama and one that is gorgeous in its cinematography and contains a very good soundtrack that works well with the drama that unfolds in the movie. If you are not adverse to subtitles and enjoy a good drama, this is highly recommended.

Other titles released this week:

Article Source: Assignment X
Article: Blu-ray and DVD Reviews for the Week of May 19, 2015