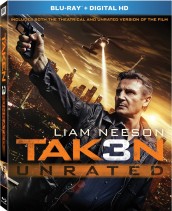 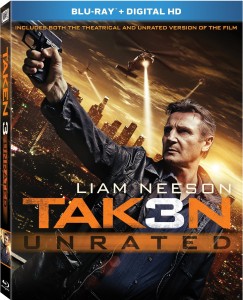 TAKEN 3 – There is such a thing as too much of a good thing. Unfortunately, the TAKEN franchise has run its course and this will no doubt be the end. In the first TAKEN film, Bryan Mills (Liam Neeson) fought to reclaim his daughter from nefarious criminals that were trying to use her in slave labor. The second film dealt with the consequences of the actions taken in the first film where his ex-wife, Famke Janssen, was kidnapped and Mills was tasked with bringing the evil-doers to justice. In TAKEN 3, there is really no one getting kidnapped here and the only “taking” is in a figurative sense as the bad guys try to take his life by framing him for the murder of his wife. This sets Mills against the cops while simultaneously trying to kill those that did him wrong. The script is pretty lazy in that it lacks any tension that was involved in the first two films because there is nothing at stake here other than himself. The first two films had a prize at the end of the tunnel, a reason for fighting and without it, there is something missing from the initial moments of the movie to the end where there is a “shocking” twist. Action wise there is plenty to like here, Neeson is one of the best for doing the badassery that is needed in a film like this but without the tension, it is gratuitous in some ways. I loved the first TAKEN, part two was pretty good as well but TAKEN 3 will ultimately be forgettable. 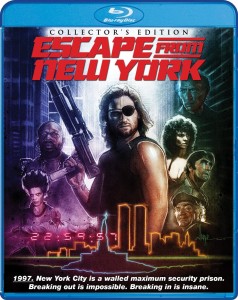 ESCAPE FROM NEW YORK: COLLECTOR’S EDITION – If you have ever seen ESCAPE FROM NEW YORK you will most certainly want to revisit it again as the folks over at the awesome Scream Factory have released the film with a new 2K resolution transfer from the original negatives that provides maybe the best possible viewing the movie in its history. It simply looks amazing for a film that was released in 1981. Despite the crazy idea of Manhattan being turned into the world’s largest prison and the outdated technology involved, the film still holds up as supremely enjoyable with Kurt Russell putting on one of his best performances of his career. Added to this is the list of new things they have included in this release include an entire separate disc with special features including new interviews with the actors and John Carpenter, new featurette on the score and a new featurette on the visual effects used as well as the legacy extras that were provided in previous releases of the film. If you have been waiting for a new Blu-ray cut of the film using the latest technology, wait no more because it is here and it is simply awesome. A must have for fans. 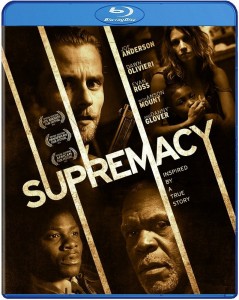 SUPREMACY – An interesting thriller about a neo-Nazi that gets out of prison and within the span of 24 hours kills a black police officer and kidnaps a black family imprisoning them within his home as he fights his demons about the choices he has made in his life. In some ways, SUPREMACY is more AMERICAN HISTORY X than it is a thriller about a home invasion. The main character played by Joe Anderson is conflicted about his choices he has made. On one hand, he is extremely loyal to his clan of white supremacist brethren but on the other hand feels betrayed by them as he has literally nothing to show for anything he has done besides spending nine years in prison for the crimes he has done over the years.  After he finds himself in a no-win situation with the black family and the cops are closing in, he learns just how deep the loyalty of his fellow supremacists goes and he finds more kinship in the fatherly figure played by Danny Glover than he does anyone else – after everyone turns their back on him. It is an interesting dynamic and it is a shame that this aspect isn’t played up further in the film. The last few minutes are deeply dramatics and emotional – something that should have been done earlier in the film so it comes off as a bit contrived at the end but the emotions are still intense. But not a bad thriller drama and worth checking out if you enjoy such films.