The actor talks working with Eugene Levy and Catherine O'Hara 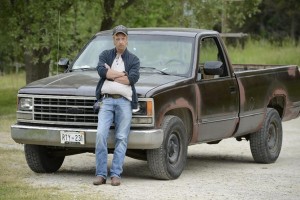 In Pop Television’s SCHITT’S CREEK, Wednesdays at 10 PM, the wealthy Rose family goes broke and is forced to move back to the title town, which they previously bought as a joke.

Then there’s town mayor Roland Schitt, played by Chris Elliott. Native New Yorker Elliott has an extensive film and TV career that includes some drama – he was in the original 1986 MANHUNTER and James Cameron’s THE ABYSS – but is weighted more toward comedy, with recurring gigs on THE LATE SHOW WITH DAVID LETTERMAN, HOW I MET YOUR MOTHER, SATURDAY NIGHT LIVE and many more.

At a luncheon sponsored by Pop Television for the Television Critics Association, Elliott talks about playing a politician and working with people he admires.

ASSIGNMENT X: Were you looking to do television again at this point, or did you just go, “Oh, Eugene Levy, really can’t say no to that”?

CHRIS ELLIOTT: Well, I definitely went, “Oh, I can’t say no to Eugene Levy and Catherine O’Hara.” That was the first thing. But I’ve never really left television. That’s sort of only what I’ve done. I’ve done movie roles, but my career really has been in TV. So it wasn’t like, “Oh, I’m going to go back and do TV.” I think that was a bigger deal for Eugene and Catherine, who have really just been doing movies lately. It wasn’t really that big a change for me.

AX: What can you say about your SCHITT’S CREEK character?

ELLIOTT: I play Roland Schitt, who is actually the mayor of Schitt’s Creek. I guess you could describe me as kind of a nemesis to Eugene. I’m a guy who has a lot of issues, he thinks he should be the big man on campus and always was, but then Eugene, who actually owns the town, rolls into town in lovely suits and I think I’m somewhat intimidated by him and tend to challenge him.

AX: Is the back story that Roland developed this town?

AX: So the founder was an ancestor.

ELLIOTT: Yes, exactly. My great-grandfather, I think, was the founder.

AX: Is this a stretch for you, as far as playing a resentful person?

ELLIOTT: No, it’s not. That’s only an aspect of him. He is multi-layered, but he is generally Eugene’s nemesis, at least for the first couple of episodes, and then that sort of arcs to where there’s a little more camaraderie between the two. No, it’s not a stretch for me, it’s a character that comes very easily, actually, for me to play.

AX: Is Johnny Rose overt in his hostility, or is he polite about it?

ELLIOTT: Well, at times, he’s overt, but he also has to use me for certain things, so he has to temper his temper, basically, with me, and he has to kowtow to me and placate me quite a bit. Otherwise, he can’t get what he wants, and that’s a dynamic that runs through a number of the episodes.

AX: How is Roland’s aggression?

ELLIOTT: Well, he’s never violent, although maybe [he will be] Season 2, but I think it shows in backhand compliments and insults that basically are just despising people.

AX: And is there anything else you’d like to say about SCHITT’S CREEK?

ELLIOTT: Without sounding cliché, it is the thrill, literally, of a lifetime to be working with Catherine and Eugene. I have to pinch myself, not just to work with them, but in between scenes, to joke around with them. To actually make Eugene laugh on his own, while we’re sipping coffee, and to see him try to make me laugh, and the same with Catherine, is a thrill to me. I’ve become very close to them very quickly.