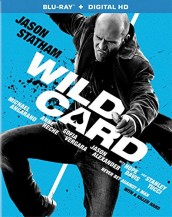 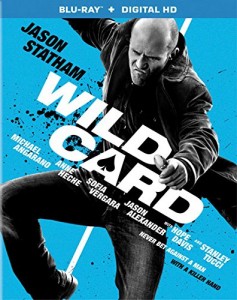 WILD CARD – I’ve always said that Jason Statham is the king of the one-word action movies, having starred in SPY, HOMEFRONT, REDEMPTION, PARKER, SAFE, BLITZ, TRANSPORTER, CRANK and more. But maybe he is the king of the two-word action movies as well with THE EXPENDABLES, KILLER ELITE, THE MECHANIC, DEATH RACE and now WILD CARD under his belt. However, while Statham has done a truckload of these type of action movies that generally involve him kicking serious butt on multiple red shirts in order to get to a bigger boss man that has in some way done him wrong, they still are quite enjoyable. WILD CARD is a bit of a different Statham movie as it involves his character of Nick Wild being a hardcore gambling addict that even when he’s winning can’t do anything but give it right back to the casinos. This focus is as big of the movie plotline as is his getting revenge for a female friend of his that gets roughed up by a mob boss’ son. While he must deal with the countless goons that are sent to get revenge on him after he beats up the mob boss’ son, he also is trying to get enough money to leave Las Vegas and meets a do-gooder looking to become less of a pussy and trades money to Wild for training on how to be a kick-ass guy. Again, it’s a typical storyline for Statham but one that isn’t unenjoyable by any means and so if you enjoy his movies, this one will find you pleased too. 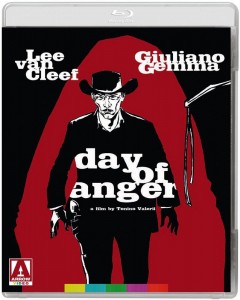 DAY OF ANGER – Another restored gem from Arrow Video that is a knee-deep spaghetti Western starring Lee Van Cleef as a tough-as-nails gunslinger that lives for fortune and glory that takes on a young, abused barkeep that is taken advantage of by everyone in a small town. Through the course of the movie, Van Cleef educates the young man in the ways of a gunslinger, showing him examples in the flesh, teaching him his ways full of blood and death. When they return to the same town, Van Cleef and his protégé take control of the town and the once-stepped on barkeep is now a bad ass gunslinger and takes his revenge out on those that wronged him. However, when Van Cleef kills the boy’s father – posing as the new sheriff to stop their rampage – the pupil uses what the master taught him in order to take Van Cleef down in an epic showdown between the two. DAY OF ANGER is a presented in stunning high definition for the first time ever and really looks good after all these years. It also contains two version of the film, the edited version that came to the U.S. originally and the full European cut that has many added scenes. Well worth it if you are a fan of classic Westerns now looking maybe the best it has ever looked. 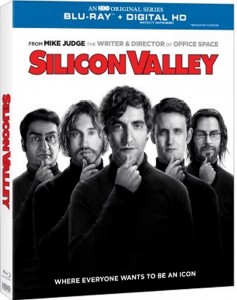 SILICON VALLEY: THE COMPLETE FIRST SEASON – The very funny inside look at those that work at or inside a technology company is one part over-the-top look at the reality of the IT explosion, one part standard sitcom tropes but all funny. The first season collects all the eight episodes from Season 1. Part of the charm of the series is that if you have worked at a tech company or any related electronics firm, you find the characters involved to be exactly like those you find at your work, especially the way that CEOs sometimes are viewed as God-like characters and begin to believe in their own bullsh** after a while. Mike Judge is the creator of the series and having belonged to the boom in Silicon Valley in the 80s knows exactly how things went down and it shows as this is a smart show that delivers comedy that is intelligent and at times scathing. With the second season of the show beginning in a few weeks, this is a perfect time to catch up on what you missed.