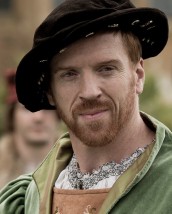 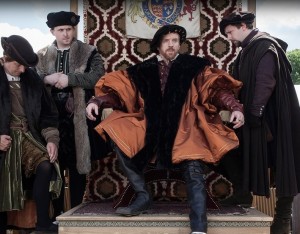 Damian Lewis won an Emmy for his portrayal of Nicholas Brody, a U.S. Marine turned terrorist turned counter-terrorist assassin, during his three years on HOMELAND. The London-born actor, who previously starred in two seasons of LIFE, is now back on television playing no less an historical personage than England’s King Henry VIII in PBS’s six-hour WOLF HALL, which premieres Sunday, April 5. Adapted from Hilary Mantel’s novels, WOLF HALL explores the relationship between Henry and his spy master, the common-born Thomas Cromwell, played by Mark Rylance, as well as the marriage of Henry and second wife Anne Boleyn (Claire Foy).

AX: Was part of the appeal of WOLF HALL that Henry’s very in control of what’s going on around him and it’s a nice change from three years of playing Nicholas Brody, who very often got knocked hither and yon by everyone around him?

DAMIAN LEWIS: Yes. Well, Henry is someone who struggles for control. He’s not always in control, but certainly he’s less of a pawn than Nicholas Brody was, that’s true.

AX: And playing Henry, you’re less likely to wind up doing scenes naked and wet in a tenement …

LEWIS: I hope not. It depends on who I’m naked and wet with, of course [laughs], but yeah. Henry was a revered and admired Renaissance prince. He was a man of his time that Erasmus and commentators all through Europe said, “This is the most wonderful living embodiment of royalty, of what a modern young king should be like.” He was a composer, he spoke many languages, he was the best jouster, huntsman, falconer, archer in his era. He was an architect, a designer, he was a man who wrote bad love poetry, I hasten to add, but he was the embodiment of a Renaissance prince, and he surrounded himself with a court of men who he demanded had those skills. It was a return to a chivalric time of [Thomas] Malory, a sort of Middle Ages time, the eighth or ninth century, of Arthur and his Round Table of knights, the Gawains and the Lancelots. He consciously tried to create that idea of a chivalric court. And he was a wonderful, brilliant, childlike at times, boyish man.

AX: We have this image of Henry as this heavyset man in middle age, but in his youth, he was supposed to have been quite good-looking …

LEWIS: There are lots of comments. He was vain. Oh, my God, certainly he was vain. Commentators, they commented on his beautiful pale complexion, that he had the most beautiful skin of any prince they’d seen. He was tremendously proud of his calf muscles in a childlike way. He lorded it over Philip the Fair of France, saying, “My calf muscles are better than yours.” He was a kid on one level.

AX: How are your calf muscles?

LEWIS: They’re not that good! [laughs] Which is why [WOLF HALL costume designer] Joanna Eatwell put me in thigh-length boots, to stop my pale, skinny English white legs poking out. No, I would definitely have had to use handkerchiefs or something to pad out my stockings if I was to have the exemplary calves that Henry the Eighth had. Henry the Eighth was a broad man with a big chest, and what’s so extraordinary about Joanna’s costumes is, she creates that size for me. She made me that size, and it looks natural. It looks like it’s me.

AX: Is it comfortable to wear that garb?

LEWIS: Absolutely. All of it. Some of it was heavy, some of the ermine was heavy. That of course was a sign of great wealth and status. The attention to detail was extraordinary. But Henry had a thirty-two-inch waist. He had a waist like mine. He was a svelte guy into his forties, until he had this big jousting accident, when his horse rolled on him. He was unconscious for two hours and he came back from the dead. They proclaimed him dead. He came back after two hours. But after that, he then became slower, fatter, and he ended up with a fifty-four- or a fifty-six-inch waist, so you can only – I mean, he really ballooned.

AX: How do you prepare for a role like this?

LEWIS: I mostly read, and I immerse myself in material. I watched historical documentaries – I didn’t watch Richard Burton or Ray Winstone or whoever else playing Henry the Eighth. It’s not helpful. I use animals a lot, though. I use animals and I try to find a human physical essence of an animal for most characters.

AX: What animal is Henry the Eighth?

LEWIS: Well, it depends what schools you go to. I went to schools that – I started at King Alfred burning the cakes, in the sixth century, eighth, ninth century, whenever it was, and I also wasn’t listening that day, and go through Plantagenet history, which for us is the Richards, everyone knows Richard the Third, and the end of Plantagenet history was 1485, which is six years before Henry was born in 1491, and famously, in the Battle of Bosworth in 1485, Richard said, “My horse, my horse, my kingdom for a horse,” and [Henry the Eigth’s father] Henry Tudor, who was Henry the Seventh, fished the crown out of a thorn bush. That’s just part of the history/mythology that we all learn, and then yeah, with Tudors and Victorians, we sort of go through it.

AX: Your wife Helen McCrory is in the new season of PENNY DREADFUL, playing what seems to be a very powerful witch. What would King Henry make of her character?

LEWIS: As long as he was happy bathing in goat’s blood, they’d hit it off famously.

AX: When you play someone like Henry the Eighth, do you feel like you have a lot to live up to in terms of him being such a prominent historical figure?

LEWIS: No, I never feel that as an actor. The challenges are always there, but a lot of the fun of acting is in the preparation for roles. You need to be forensic, analytical, scientific in your approach in order to get to the heart of these people, and then that’s your skill as an actor, is to embody them. Look, I don’t look exactly like Henry, Mark [Rylance] doesn’t exactly look like Thomas Cromwell. But you capture their essence with your own essence, with your spirit, and it’s that unspoken thing that Mark said. You don’t know how you create those things, they’re in you. That’s, for want of a better word and I don’t mean to self-aggrandize, but that’s the poetry of any art form, it’s the creating of something that happens in an unknown place.

This interview was conducted during PBS’ portion of the Television Critics Association press tour at Pasadena’s Langham-Huntington Hotel.