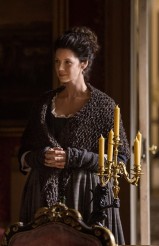 The actress talks onscreen intimacy - and her favorite episode so far 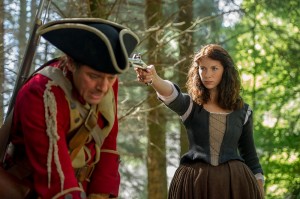 Caitriona Balfe stars as Claire in OUTLANDER on Starz | © 2015 Starz

Starz’s OUTLANDER, adapted from Diana Gabaldon’s best-selling novels, returns for the second half of its first season Saturday, April 4 at 9 PM, not a moment too soon for its many avid viewers.

The season break ended with a cliffhanger. Caitriona Balfe’s character Claire, a married World War II English army nurse, accidentally traveled back to eighteenth-century Scotland. There, she meets two men who rapidly become significant to her. One is stalwart young Jamie Fraser, played by Sam Heughan, who gallantly marries Claire to prevent her from being arrested by the local representatives of the English Army. The English garrison is commanded by John “Black Jack” Randall, played by Tobias Menzies, who to Claire’s shock is the exact double of his descendant, Claire’s twentieth-century husband Frank (also played by Menzies). However, where Frank is gentle and thoughtful, is a strategizing sadist who uses flogging, rape and murder as tools of persuasion.

In the mid-season finale, Black Jack had quite literally gotten his hands on Claire and was in the midst of assaulting her sexually when Jamie – who had already suffered under Jack’s whip – burst into the room, pistol in hand.

Despite her perfect English accent, Balfe is actually Irish. She’s had roles in a number of TV and feature projects, including SUPER 8, NOW YOU SEE ME, ESCAPE PLAN and the upcoming films THE PRICE OF DESIRE and MONEY MONSTER with Julia Roberts and George Clooney.

Balfe – who explains that the correct pronunciation of her name is Kah-TREE-na Balf (rhymes with “Ralph”) – can’t reveal spoilers, but she’s happy to talk about playing OUTLANDER’s resilient heroine.

AX: You make Claire appear very comfortable in the scenes where Claire is being intimate with Jamie or with Frank …

BALFE: Well, I think it’s because I trust my costars so much. I think Sam and I and Tobias and I have just built up such great friendships that it makes it very easy when it comes to those scenes. As awkward and as challenging as they are, I think when you have people there that you trust, it just makes them easier.

AX: Tobias Menzies plays both Claire’s beloved husband and the extremely scary Jack Randall. Do you feel you are working with a different person when he’s playing each character, or is that a challenge, to remember that it’s meant to be two different people?

BALFE: No. I mean, he’s such a fantastic actor that when he’s off set, when we’re not working and he’s just Tobias and we hang out and we have lunch in our trailers, some of the scenes that we share [when he’s playing Jack] are very challenging, so just by that very nature, we’re not goofing around as much as we would if maybe perhaps it was Frank and Claire. He’s not Method, but he’s a very, very dedicated actor. It’s easy to separate.

AX: Working with everybody else in Scotland, does your real-life speaking voice ever have a tendency to come out? That is, do you have to consciously suppress it?

BALFE: Oh, I hope not. You know, it’s funny. My Irish accent I think is so mild at the moment, because I lived in the U.S. for so long, but I don’t know. For some reason, when they yell “Action,” it’s just a very natural thing. I think we’ve been doing the show for so long now that it’s just second nature to have the British accent.

AX: Did you have to learn any skills in order to play Claire, like horseback riding?

BALFE: I didn’t know how to horse-ride. I’d been on horses before, but they definitely gave us lessons in that, and I got to meet with a herbalist quite a lot, so I think I can now make a pretty good herb cream [laughs].

AX: Do you have a favorite scene or episode so far?

BALFE: I’m really looking forward to Eleven [“The Devil’s Mark,” which airs April 18]. That’s one of my favorites.