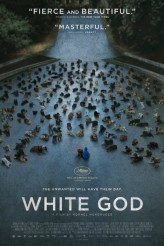 First let it be said that there are a whole slew of astonishing images in the Hungarian film (with English subtitles) WHITE DOG, courtesy of both director/co-screenwriter Kornel Mundruczo and animal trainers Teresa Ann Miller and Arpad Halasz. Another film with this many actual non-CGI dogs all performing together does not spring to mind.

However, some of WHITE DOG’s themes have been approached before in the cinema. There’s a whole range of movies from WILLARD to RISE OF THE PLANET OF THE APES dealing with intelligent animals who wind up weighing affection for a particular human against brutal human behavior in general. It’s wrenching seeing this played out with a young girl, Lili (Zsofia Psotta), and her beloved dog Hagen (soulful and brilliantly trained canine siblings Luke and Body). Mundruczo and his cowriters Kata Weber and Viktoria Petranyi have come up with a scenario that is often affecting and sometimes painful to watch. Still, because many viewers can guess where this is going, because the film takes its time getting there and because there are moments of what could be termed inappropriate delicacy, it’s a somewhat uneven journey.

Trouble begins when Lili’s mom (Lili Horvath) drops Lili and Hagen off with Lili’s father (Sandor Zsoter), who wasn’t warned his daughter had a dog. Dad is a dog-hater and refuses to pay a new tax the city is imposing on mixed breeds. When he threatens to take Hagen to the city shelter, Lili sees letting Hagen go on the street as the only way to save her dog’s life.

Not surprisingly, Lili begins acting up. Hagen tries to find his way home, but winds up in a series of dangerous situations, including a dog-fighting ring. This is as good a time as any to mention that the production notes stress that no dogs (or people) were ever in danger; the way the scenes are shot and edited reinforce this notion. Finally, Hagen rebels against what’s being done to him. Other dogs follow his lead and make a break for it.

Here is where that previously mentioned delicacy becomes an issue. There are some bloody scenes, but one really has to embrace a sense of magical realism to avoid questioning the hows and whys of what’s happening when the story takes this turn. Since WHITE GOD is fairly realistic for its first two-thirds, the sudden need to take certain plot points on faith is jarring.

Scenes of dogs and humans being brutalized and killed mean that parents should not assume this is child-friendly (or even very-sensitive-adult-friendly). Further, a better balance of naturalism and fancy would likely have made for more effective storytelling.

Even so, the climax is lovely, Psotta is a beautifully persuasive, serious young heroine and the dogs are magnificent. Seeing so many dogs (many of which, according to the notes, were shelter dogs themselves, all adopted after filming concluded) working together in so many sequences is viscerally moving.