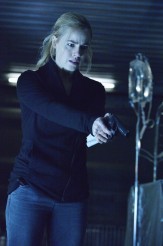 The actress talks her character's reaction to proof of time travel 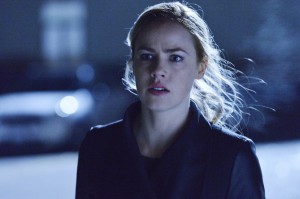 In Syfy’s series 12 MONKEYS, which has its first-season finale Friday, April 10 at 10 PM and will be back next year with Season 2, Aaron Stanford stars as James Cole, who travels from a plague-devastated 2040 back to 2015. In the 1995 feature film TWELVE MONKEYS, adapted from the French short film LA JETEE, the past could only be observed. However, in the television version, adapted by Travis Fickett and Terry Matalas, time can be changed, and Cole hopes to prevent the apocalypse with the help of initially skeptical 2015 virologist Dr. Cassandra Railly, played by Amanda Schull.

Schull (pronounced “Shool,” the actress relates) hails originally from Honolulu, Hawaii. Fittingly, she’s appeared on several episodes of HAWAII FIVE-0. Schull has also had arcs on ONE TREE HILL, PRETTY LITTLE LIARS and SUITS, as well as feature film roles and a number of guest-starring gigs, one of them on NIKITA while Fickett and Matalas were on the writing staff for that series.

AX: Had you seen the original 12 MONKEYS film?

AMANDA SCHULL: I had seen it years prior. I did not re-watch before filming the pilot.

AX: Did you learn anything once you got the part, as far as how to give an injection or look at a microscope?

SCHULL: I did get a little bit of an education from a nurse, but I’ve been doing research on so that I don’t look like an actor attempting to be medically involved.

AX: Did the 12 MONKEYS series creators, Travis Fickett and Terry Matalas, remember you from NIKITA and bring you in on the basis of that?

SCHULL: I don’t know whether they brought me in on the basis or not, but it was very helpful. The episode of NIKITA that I did was called “Black Badge,” and my character’s name was Naomi. They told me later – I don’t know if it was the second or third time that I was in the room with them that they were carpooling on their way to a session – I don’t know if it was casting, I don’t know if it was a producer session discussing things – that one of them turned to the other and said, “Naomi.” “Naomi?” “Naomi from ‘Black Badge’.” And they hadn’t written [most of] that episode – they had only written this epic fight scene that I had with the Nikita character [played by Maggie Q]. That was the only part they had written for the episode – specifically my material. So when I walked into the room, they were already receptive to me, which was really nice. I don’t know whether I would have been brought in otherwise. I had a feeling I probably would have gone in otherwise for the role, but it was really nice to already have a context, that they had seen my material and seen me do their work beforehand.

AX: Railly starts out with Cole, this total stranger, coming up to her and saying something that sounds absolutely preposterous, and then she finds out it’s true and she’s kind of trapped …

AX: That’s where you have the gift of prophecy, but nobody believes you?

SCHULL: Yes, absolutely. And her name is Cassandra.

AX: Did you base your portrayal of her on anyone?

SCHULL: I don’t usually base a character on anyone in particular. I grab from several elements and I try to create somebody who’s original. And so I use real-life experiences, but I also use what I believe to be her real-life experiences and I try to build a person from the ground up. And her life history is very different from my life history, it’s very different from anybody else’s life history, and of course, having this encounter with Cole is different from anyone else in the world’s life history or experience. And so that was something that I wanted to make very clear, is that she couldn’t be further from a person who would believe in a time traveler. She is not a person who is out there chasing UFOs. She is a logical, intelligent woman who is a medical professional and virologist, a very specialized field, who is highly esteemed in her craft. And she’s not a typical person who would go on a journey with a time-traveling prophet who predicts the end of the world.

AX: How is it playing somebody who looks as though she’s going to spend a lot of the series perpetually alarmed? Is that a tough state to live with emotionally as a performer?

SCHULL: [laughs] I think you’re going to see a real arc. She’s definitely going to have experiences that change who she is to the core.

AX: And who is Railly at her core?

SCHULL: How I describe her, and it’s not just her profession, it’s how she engages in life, she has a need for truth, and she seeks the truth with all things. And the truth of the matter is that she knows what she saw. Several people may have this experience and have a different reaction. She knows what she saw, she’s a logical, intelligent woman, and she doesn’t shy away from the fact – she tells police officers, she tells investigators when they come to investigate her abduction, because she was on the phone with the Aaron character [Railly’s ex-fiancé, played by Noah Bean], she doesn’t hide the fact that [Cole] disappeared before her very eyes. People who would question that to be reality would probably keep that a secret, but she doesn’t. She comes right out with it. And that’s a very bold move for a person to make. It’s not that she’s so naïve to think that people wouldn’t say she’s crazy, she knows the ramifications of saying that, but she is who she is, and she’s smart enough to know that this did happen, she didn’t have a momentary aneurysm or a brain moment, she saw this – he must be telling her the truth. She does have this mission, for lack of a better word, that she will now need to accept and journey through.

AX: Is she concerned about changing the future, or she is fully on board with Cole’s agenda?

SCHULL: I don’t think she’s concerned about changing it. I think that she believes him after a couple of things that he does – the disappearance, the watch-scratching – and then you see what happens during those two years between their first encounter, when she sees him, how she realizes what she needs to do, given the fact that she has been chosen for that, she is the right person for this particular [task].

AX: Do you see her more like somebody who’s one of the doctors in CONTAGION, who is, “We have to get this locked down and I’m dealing with a bunch of people who don’t believe we have a problem,” or is there an extra element of weirdness to this for her?

SCHULL: If I can say “both,” that’s the answer. [At the start, Railly] hasn’t experienced time travel, so obviously there is an unknown there that she has chosen to believe because she’s seen it, she hasn’t experienced it. So there’s a level of mystery that she can’t reason and she can’t explain. She can explain everything professionally with science, and this is not explainable, so there is a level of mystery. However, she also knows what [Cole] said to her, that her voice was on a recording, she worked with the CDC and they were attempting to contain the virus. So she believes that from that point forward, she has this journey that she needs to do, and she’s a fixer, she fixes things. That’s what you do as a virologist – you understand it, and then you solve it. So that’s what she’s going to do, the way that she knows how.

AX: Does Railly still have feelings for Noah Bean’s character Aaron, or has she gotten so exasperated with him for not backing her up that she’s like, “Eh, the heck with you”?

AX: What about her feelings for Cole?

SCHULL: I think he’s mysterious and I think that there’s an element to him that’s very interesting, but it is very much a non-partnership partnership, if that makes sense. They’re not always together, and yet they’re on this same trajectory to try to understand this, for very different reasons, and whatever that means between the two of them – in one universe, it might mean one thing, and in another, it could mean a completely different thing.

AX: How are you enjoying playing off your 12 MONKEYS cast mates?

SCHULL: Very much so. This has been a really nice experience. When you’re in this kind of a situation, you care so much about your character and you’re so invested, all you can hope for is that the person opposite you feels the same way, and they do. They feel the same way. They care just as much as I do and so each scene, they want you to do as well as you can, which means you give as much as you can, so that it’s an equal partnership and you’re bouncing off of each other. That’s what these guys have done.

This interview was conducted during Syfy’s press day for the Television Critics Association at the Beverly Hilton Hotel.