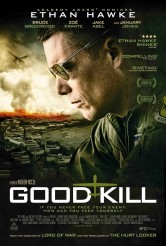 He’s been JFK facing off against Russia, played a President holding onto a Book of Secrets, embodied the best of The Federation as Commander Christopher Pike and even voiced Batman. Because when it comes to embodying brave politicians and sternly noble authority figures, few actors carry the intelligent, often patriotic gravitas of the Canadian-born Bruce Greenwood. Possessed of a sonorous voice and chiseled looks, Greenwood has certainly played a myriad of roles in a nearly four-decade career that’s ranged from ST. ELSEWHERE’s Dr. Seth Griffin to TV’s identity-erased NOWHERE MAN as well as an inner-earth astronaut exploring “The Core” and as bereaved parents in EXOTICA and THE SWEET HEREAFTER for his frequent Canadian filmmaking collaborator Atom Egoyan. Yet it’s always been Greenwood’s ability to engender salutes that’s made him a commanding presence, one whose mission is no more troubling than as a drone warfare overseer in GOOD KILL.

GOOD KILL is certainly on target for writer-director Andrew Niccol, who makes his most impactfully assured movie since GATTACA, expounding on the idea of realistic sci-fi to a battle scenario that’s a first-person shooter for real. GATTACA star Ethan Hawke is back to man the controls for Niccol, here piloting these killer, unmanned flying machines as Major Thomas Egan. Once able to engage in direct battle with the Islamist enemy as a jet fighter, Egan now practices his craft in front of an impersonal console, blowing up the enemy, and innocent innocent bystanders when he has to, all with ever-increasing mental peril. Watching over Egan like a friendly hawk is Bruce Greenwood’s Lt. Colonel Jack Johns, an officer who’s not especially happy to be overseeing the action from a base in sunbaked Las Vegas. A mixture of buddy and occasional hard-ass to Egan, Johns finds his star operator harder to manage when the CIA steps in to guide missions that are distinctly off-book, pushing Egan’s moral boundaries off the radar as he battles to retain control of his mind, and marriage.

Amidst a surfeit of the military uniforms he’s donned in film, television and even a videogame, GOOD KILL ranks as one of Bruce Greenwood’s most important, and impactful films about how war is anything but a game in a society of constant surveillance – a mission file he now discusses. 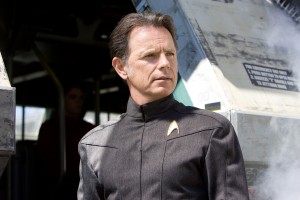 ASSIGNMENT X: It’s always struck me at how good you are at playing politicians and authority figures. What do you think it is about your persona that’s crafted that kind of niche for you?

BRUCE GREENWOOD: It’s a mystery to me, because my own life is just a hodge-podge of poorly judged decisions and bizarre circumstances. Yet I I seem to be comfortable in that slot. But I suppose it has mostly to do with the material. And if Lt. Colonel Jack Johns in GOOD KILL supports the idea of playing characters who have a firm grasp of what they want, and what their obstacles are, then it’s not difficult to invest in them. Whether an actor can stand there and go toe to toe with somebody is a function of believing that your character knows what he’s talking about.

AX: You certainly get that sense when Johns has his big “Patton speech” moment as he lectures the new recruits about drone warfare in the opening of GOOD KILL.

GREENWOOD: I read Andrew’s script about a month before we started shooting. And I thought to really be comfortable with it, then I needed to experiment with it for a good while rather than just to memorize it and hope it all went well. So I practiced Johns’ speech for quite a while, and massaged it in different directions. Then I threw what I was thinking at Andrew, and we got it into shape for what we thought was appropriate to the scene. The character does a lot of talking, so it was nice to know that his first big spiel was something that was well written and resonant.

AX: How do you identify with Johns?

GREENWOOD:  I think we’re all faced with really, really tough moral choices. Personally, I resist making a decision about those moral choices for the first little while. I consider the options, because no one wants to make the hard choices – or at least I don’t anyway. One of the things that spoke to me the loudest about Johns is that he must play both sides of the fence. He’s literally stuck in the middle. You can make the argument very effectively about the military’s decision to use drones. But you can also make a counter-argument that’s almost equally effective. It’s living in the tension between those two arguments that I found really interesting about the way that Andrew drew Johns’ character.

AX: I think that GOOD KILL is going to be a really eye-opening film as to how drone warfare is anything but playing some first person shooter, albeit with real people as the targets. What were the biggest things that you discovered about drone warfare while making the film?

GREENWOOD: The irony is of it being so impersonal, but having such a profound impact when the drone operator walks out of “the box,” and is no longer in that sort of combat mode of thought. Suddenly they’re in the bright Las Vegas sunlight, and are on their way to pick up a six-pack before heading home. It’s a surreal otherworld. Where I suppose that when you’re “in country,” you and your heart are there 100% of the time. You can’t even get away in your mind. So being suddenly shunted out into a Vegas afternoon after “being” in country with a drone is a difficult thing to navigate emotionally.

AX: Clint Eastwood said that there was no real political viewpoint in AMERICAN SNIPER, though many would argue that. But it definitely seems that GOOD KILL comes down against drones, and the Middle Eastern wars all together. In that respect, is it better to be in film with a clearer message?

GREENWOOD: I think it’s great to be in movies that demand conversation. I don’t think everyone feels that GOOD KILL is an unequivocal stand against drone warfare, or war in general. I think both sides can have their opinion about the film to decide what its intentions are. 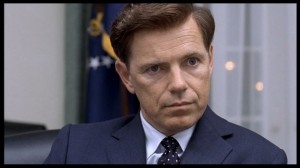 AX: There’s a lot of unexpected humor that Johns has through the often-horrific situations he’s observing.

GREENWOOD: Well, yeah. The world is surrounded with absurdity and pain. Often we have to find some kind of black humor to help us get through it. Andrew is particularly effective in drawing that out from the characters, even from Ethan Hawk, whose character is very quiet. Andrew’s got an unerring sensitivity as to how to create irony in a moment, and it was fun to watch him craft that.

AX: Yet I found Colonel Johns to be a bit twisted in knowingly driving Egan to the breaking point.

GREENWOOD: I’ll disagree with that. I don’t think he recognizes it in time, which is one of the regrets he has. He sees Egan’s behavior, but misses the import of those signals. I think that if he knew where Egan’s head was emotionally, then he wouldn’t have used him until he was used up. Maybe Johns is unwilling to see the signs because he doesn’t want to let go of a guy who was close to his vintage, a soldier who understands what the real costs of war are about, because he’s been there in country. There’s a sensibility they both share in that regard, and as a consequence, he’s unable to let go of Egan’s ability.

AX: Do you think there’s something more “noble” about killing someone directly, as opposed to being in a booth doing it?

GREENWOOD: I think there’s a bigger question about the “nobility” of killing itself. Is it noble in any circumstance to kill someone? That’s a question I can’t answer. If you want a kneejerk reaction, then of course it is if you’re fighting man to man with equivalent equipment, and he’s a sworn enemy who’s going to do you in if you don’t do him in first. Then I suppose it could be considered nobler. But you have to assume there’s nobility to killing in the first place when asking that question.

AX: Do you think it would be better for the winning side to develop technology to the point where we’re just killing the enemy with robots without putting any soldiers in harm’s way?

GREENWOOD: I suppose that’s convenient if you’re on the winning side! But no. That way lays totalitarianism, whether it’s from the west or the east. We can easily be taken over by a government that’s all too willing to tell us very little. And we’re all too willing to absorb as little as possible in order not to be responsible.

AX: There’s a bigger question in GOOD KILL about the very use of spy technology, how there’s literally no way we can escape detection whether you’re on the right, or wrong side of spy surveillance cameras.

GREENWOOD: Yeah, and it’s a Pandora’s Box thing. It’s out of the bag, and I can’t imagine being able to stuff the Internet back into the narrow pipe from which it came. That’s over. It’s a very different world now. I can’t imagine what it’s going to be like in twenty years in concern to our ability to be private. It’s absolutely terrifying. Three generations from now, people might be completely immured to being observed, monitored and taken care of on a much deeper level. Our grandchildren may have not know anything different.

AX: Having done the Overlord’s voice for CALL OF DUTY: MODERN WARFARE 3, were you able to get into gaming for GOOD KILL? And did it loop into the idea of war as a videogame?

GREENWOOD: It wasn’t until after I’d done CALL OF DUTY I began to play a little. And I’m frankly grateful not to have done it sooner, because it sucks so much of your time!

AX: Johns remarks about how gamers have been recruited in malls by the military to be drone operators. If any of those young people see GOOD KILL, what do you want them to get out of it, especially if they might happen to be approached by recruiters who tell them war is like a videogame?

GREENWOOD: I would hope that sends out a bit of a red flag saying you’re being Svengali’d into something that’s going to cost you dearly. But having said that, and as Andrew says, drones are still the most accurate form of warfare we’ve ever had. It’s not perfect, but it’s more accurate than carpet-bombing or artillery. The efficiency, and the morality of it have everything to do with the information that we get. And here we are now pushing back against a world where everything is so minutely observed from above. But in order to protect ourselves, we have to invoke that technology and continue to grow it. This argument of  “drones or no drones” is like a Max Escher drawing, or a Mobius Loop in a way, because it demands that you blink once, and you see it in one way. And you blink again, and you see it in another. Whether or not it’s more moral than another form or warfare, you can talk around that forever. And we probably will.

GOOD KILL is now in limited release in New York and Los Angeles before premiering on VOD May 22nd.