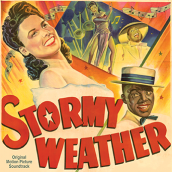 It's all sunshine for the classic song, dance and score of America's classic black artists

After their terrific release of Patrick Williams’ Italian-flavored underscore for BREAKING AWAY that coincided with Twilight Time’s blu ray movie edition, Kritzerland once again works in conjunction with the label to put out a truly historical, two-CD of one of mainstream Hollywood’s few forays into black entertainment. But beyond the song made eternal by Lena Horne for this 1943 20th Century Fox production, STORMY WEATHER also stands as one of the great American songbook scores when it came to showing black culture’s big splash on the nation’s music songbook.

Done in the all-star cavalcade style made popular from the advent of musical sound, this heavily fictionalized biography of Bill “Bojangles” Robinson was as wonderful a reason as ever for getting together the best all-colored talent of the day, many of whom played themselves. With Bojangles making a brassily raucous entrance with “Walkin’ the Dog,” STORMY WEATHER hits numerous styles and tempos with delightfully warm sound. Horne’s bluesy romantic lead vamps with the sax and strings as she moons “There’s No Two Ways About Love,” Fats Waller and Ada Brown have a comically bluesy interplay for “That Ain’t Right” (complete with his great realization of “One Never Knows, Do One?”), with Waller next on the piano for a relaxed interpretation of “Ain’t Misbehavin.’” Cab Calloway is at his boogying, scat-singing, wolf-call best for the bawdy “Geechy Joe” and “The Jumpin’ Jive,” showing off a near-yodeling tone that would become famous for a whole new generation when he took the stage before the Blues Brothers.

But it’s big band jazz that’s the name of the game here, whether its roaring hot or playing with sultry romance in one classic, swinging tune after the other. Given Twilight Time’s penchant for isolated music tracks, Kritzerland’s STORMY WEATHER goes well beyond the vocal numbers to include extended underscore as well (given exceptional vibrancy by Neil S. Bulk and Mike Matessino), which show off a range from patriotic military timpani to such southern favorites as “De Camptown Races.” It’s a glorious album that’s all about they heyday of classic black music, given the rare chance not to be in the back of the big screen bus. The album also offers a whole second cd of bonus tracks, from a sultry six-plus minute instrumental of “Body and Soul” to Lena Horne’s beautifully despondent “Good for Nothin’ Joe” and Bojangles telling the bible story of “Shadrack.” But the highlight is the Fox orchestra riffing on “Alfred the Moocher” as Cab Calloway belts out the “boy wonder” story of studio music head Alfred Newman in what’s likely most gloriously personalized and affectionate rhyming-verse tribute given to any composer on the studio stage. As such, STORMY WEATHER is a succession of landmark wonders that’s pure sunshine.

Click on the link to Purchase the STORMY WEATHER soundtrack