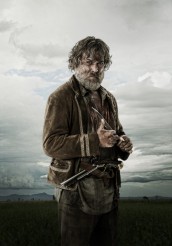 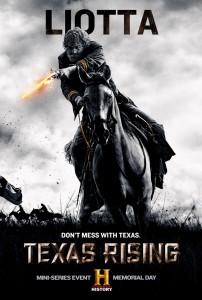 History Channel’s miniseries TEXAS RISING, which begins Monday, May 25 at 9 PM, tells the story of the mid-1800s formation of the Texas Rangers. It combines historical figures, like Sam Houston (played by Bill Paxton) and Mexican General Antonio Lopez de Santa Anna Olivier Martinez), with fictional characters, including the bereaved and vengeful Lorca, who is played by Ray Liotta.

Liotta won an Emmy for his 1994 guest turn on ER. A prolific film actor, the New Jersey native first made a name for himself in the Eighties with features including SOMETHING WILD, DOMINIC AND EUGENE and FIELD OF DREAMS, before starring as real-life Mob informant Henry Hill in Martin Scorsese’s GOODFELLAS.

At a Q&A session held by the History Channel for the Television Critics Association, Liotta explains to journalists what motivates Lorca. “My wife and my two kids are killed in front of me, so the biggest thing is just thinking about my family and wanting revenge on the people that did it. My character has a really nice – I hate to use the term, but – arc in terms of what happens, and then you find out why and how it’s affected me and the guilt. Just because you’re out killing people doesn’t necessarily mean that you like it or want to do it, but you’re just forced into it by the situation.”

ASSIGNMENT X: Were you looking to do a Western at this point?

RAY LIOTTA: No, you’re just looking for good material. When I saw what the part was, and then the fact of riding horses, it’s always nice in this business to get different chances to do different things, and play different kinds of characters. So I wasn’t looking for it, but when it came, it was just great.

AX: What did you know about this period of time?

LIOTTA: Nothing. I didn’t know anything. It was all new to me.

AX: Did you do much research?

LIOTTA: No, because my character was just a total work of fiction. They created this character, so there wasn’t much for me to do, except just to find the emotional life.

AX: Do you use a different accent than your normal voice?

AX: Did you have to learn anything in order to play Lorca?

LIOTTA: Yeah, to ride on a horse, to fight on a horse, to run, flat-out running. I wanted to do all my own stunts and they let me [do] a bit part, so I rode for months. And now it’s like a hobby that I have. I just loved it.